Miami, FL – Over the past two years, cross-border capital flows into the U.S. have risen dramatically and in 2015 foreign investment in Florida commercial real estate hit its highest rate in at least nine years, according to a new report by CBRE Group, Inc. Last year, Florida ranked fourth in the nation in terms of cross-border investment volume and the state improved to rank third in Q1 2016. Foreign buying is projected to cool slightly in 2016 relative to 2015, but remains elevated relative to historical rates.

The report, “Florida: A Destination for Global Capital,” describes the factors that are attracting foreign investors to Florida – factors including the state’s rapidly growing population and economy, the powerful global brand of its major cities, and strong cultural and economic ties to Latin America and beyond. In 2015, cross-border capital flows into Florida reached $4.3 billion, a high-point for the cycle thus far and up 85% over 2014. 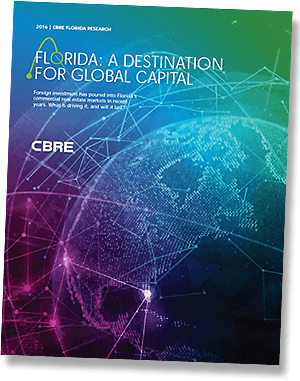 “Florida has been an attractive destination for foreign buyers thanks to its high rates of job creation and economic growth,” said Quinn Eddins, Director of Research and Analysis, CBRE Florida. “And perhaps equally important is the fact that Florida cities, especially Miami and Orlando, have strong global brands and are familiar to investors all over the world. With their strong economic performance and international renown, it is not surprising that Florida’s cities have been so successful at attracting foreign investment to their commercial real estate markets.”

According to the report, foreign investment in Florida is expected to moderate compared to 2015, but will remain elevated relative to historical transaction volumes. Heightened uncertainty in the global economy will enhance the allure of U.S. markets as safe havens for global capital. Primary gateway markets will receive the most interest from foreign buyers, but Florida, and Miami in particular, should benefit as well

Factors that have contributed to cross-border investment in Florida real estate, according to the report:

For more details from the report, visit www.cbre.com/en/research.

How to attract butterflies to a Florida garden

A Bay Area nursery is encouraging people to plant Florida native plants to help the state’s butterflies and bees, which will ultimately benefit humans.

Are you in favor of or opposed to Gov. DeSantis' proposed "constitutional carry" gun law that allows Florida residents to carry loaded, concealed guns without training, government licenses or permits?