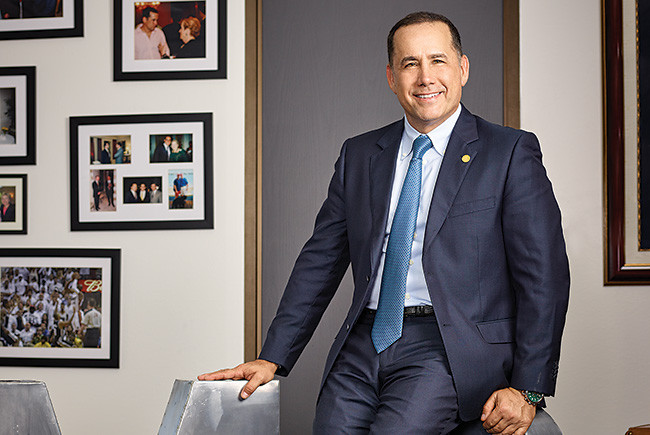 "I've always had like a movie in my mind. And i can see the vision of where I hope or think I may go in the future. It's blurry because a lot of times it's way out in the future. But I can sense or feel things." -- Philip Levine 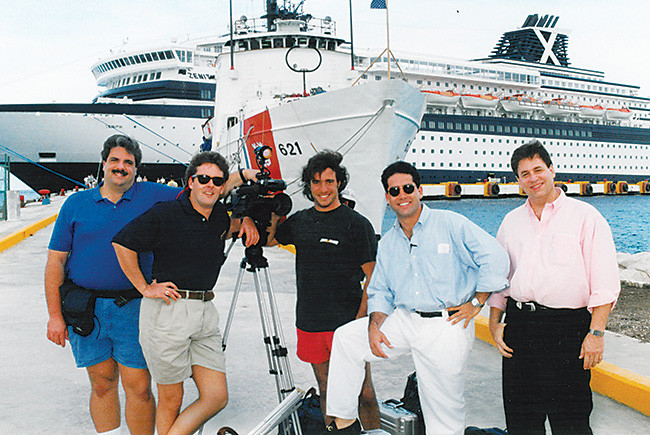 Levine (second from right) with Onboard Media employees. Onboard created promotions and programming for cruise ships. 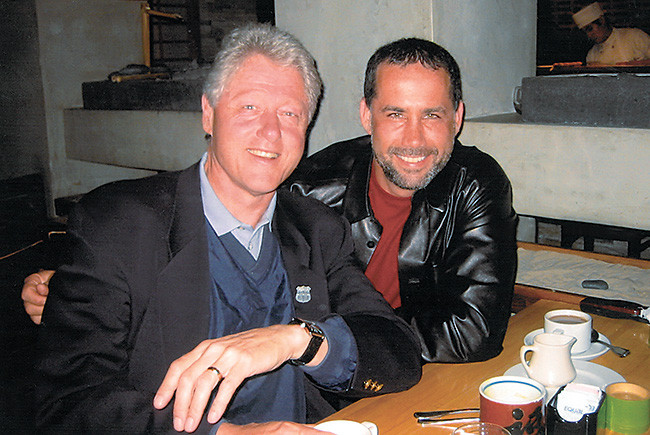 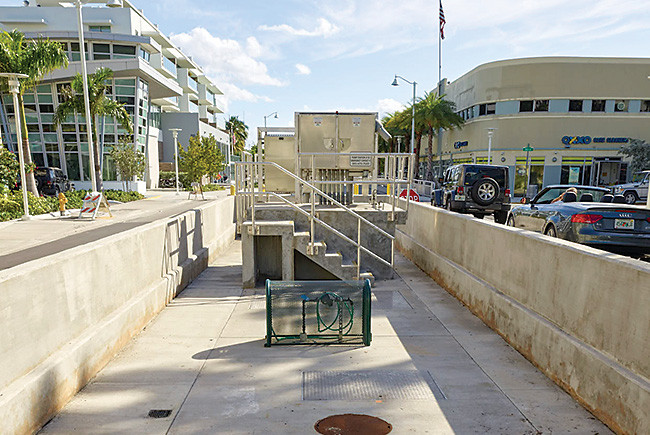 Levine has spearheaded a $500-million effort to protect the city from flooding, including raising some roads almost three feet. 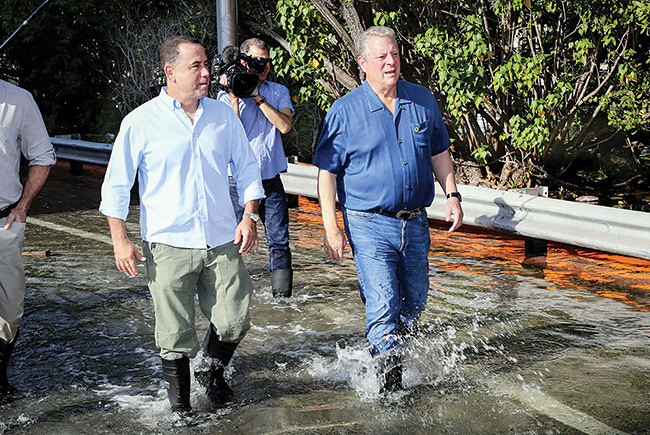 Al Gore tours the flooded streets of Miami Beach with Levine in 2015. 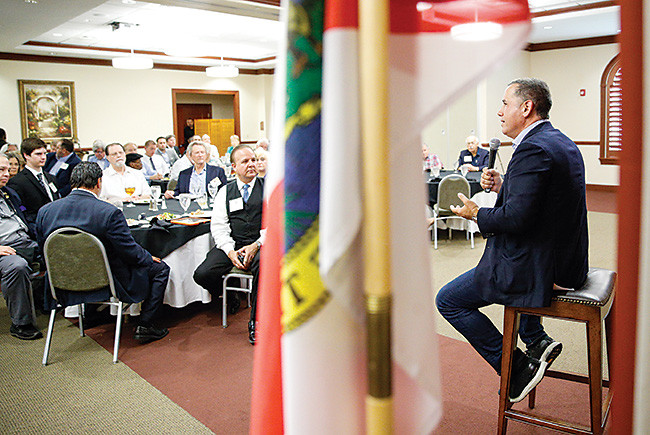 Levine is self-financing at statewide "listening tour" as he considers a run for governor.

Brash and confrontational, Miami Beach Mayor Philip Levine achieved success in business before turning his energy toward the political world — and now, a possible run for governor.

On a sunny afternoon in February 2016, Philip Levine, multimillionaire businessman/mayor of Miami Beach, came upon a FedEx truck blocking a lane of traffic on one of the city’s main roads. The driver, who had presumably just completed a delivery, was hurrying back to the truck. Levine pulled out his phone and hit “record.”

“Hey, so let me ask you a question,” Levine calls out, striding toward the startled driver. “What’s the reason you have your FedEx truck parked in the middle of our most busy road?”

“I don’t have nowhere to park it, man,” the driver responds nervously. He immediately climbs into the truck.

Levine moves closer, his voice rising. “You’re going to be getting a call from our chief in about two seconds,” Levine says, as the engine starts. He moves behind the truck to record the license plate as it begins to drive away. “Here we go. Here we go,” Levine begins saying to himself, as his phone continues to record.

A little while later, Levine posts the 38-second video, in all its awkward and uncomfortable glory, on Facebook and Twitter, with an addendum that the city had issued citations against FedEx. The posts set off a mini-storm of comments and responses — many of them critical, including one from a woman calling Levine a bully — and led to a new round of newspaper and television stories about the mayor, who campaigned in the mayor’s race four years ago — his first run for public office — under the hashtag #FixItPhilip.

These kinds of confrontations aren’t all that unusual for Levine, who has also initiated public clashes with everyone from home-rental company Airbnb to a professional geologist at the University of Miami. They have made Levine a polarizing figure in south Florida. But they have also helped make the Democrat one of the highest-profile mayors in the state — and a potential contender for governor in 2018, should he choose to run.

Levine’s style has proven effective in Miami Beach, where he has spearheaded a $500-million publicworks campaign to fortify the city against rising sea levels, overseen wholesale staff changes at the police department and city hall and pushed a long-stalled renovation of the city’s convention center to the point of completion.

Levine, 55, displays a quote in his office: “The speed of the leader determines the rate of the pack.” And he says he brings a hard-charging approach to every problem he faces — whether a rising ocean or a double- parked delivery truck.

“I’ve always felt that there’s no job too small or too big for me to handle,” he says. “If I have to go out there and tell the FedEx driver, ‘you’re doing the wrong thing, and we’ve warned you over and over again,’ so be it.”

Levine was born in Boston and raised in the suburb of Brookline. He once told a reporter that he was a “poor kid with a single mom,” although that characterization overstates the narrative somewhat. His parents divorced when he was about 7, but he and his sister were raised by his mother and their stepfather and maintained a close relationship with their biological father as well.

Levine started working around age 8 or 9 because his parents encouraged it for character-building and he wanted some spending money. He began by shoveling snow from the stoops of neighboring houses and washing the family cars. Later, he scooped ice cream at Baskin-Robbins and washed dishes at a Chinese restaurant.

He went to Edward Devotion School, the same public school that John F. Kennedy attended. Levine used to look at Kennedy’s old report cards, which the school displayed under glass, and says the artifact and its mystique fed an interest in public service.

“I’ve always had like a movie in my mind,” Levine says. “And I can see the vision of where I hope or think I may go in the future. It’s blurry because a lot of times it’s way out in the future. But I can sense or feel things. And I always sensed that I wanted to be successful in business first — and then I wanted to give back and do something in the political world.”

Monetary success came quickly. Shortly after graduating from the University of Michigan, Levine, whose family had moved to Florida when he was about 10, went to work for investment banking firm Drexel Burnham Lambert. He left there to become a lecturer aboard a Royal Caribbean cruise ship. His job was to give passengers recommendations about where to go and what to do at various ports of call. In the late 1980s he started his own company, Onboard Media, organizing shopping promotions and entertainment programming for cruise ships.

Onboard Media grew rapidly as the cruise lines themselves expanded. And as the cruise lines added ships, Levine broadened his business to produce in-cabin magazines, television programming and then onboard auctions and art galleries. In 1998, Levine partnered with Boston private equity firm Berkshire Partners to buy Greyhound Leisure Services, which operated duty-free stores on cruise ships, from soap manufacturer Dial. Two years later, Levine and his partners sold what was then called Miami Cruise Line Services to Louis Vuitton for more than $400 million.

Levine says young college graduates often ask him for his advice. “I always say catch a wave,” he says. “I don’t care what wave it is. I don’t care if it’s the internet wave, the social media wave, golf courses — there are always waves out there. I caught the cruise ship wave.”

As his wealth grew, so did his involvement in Democratic politics. During Bill Clinton’s second term as president, Levine says he was asked to host a fundraiser at his home for the president and the Democratic National Committee. The evening ended, Levine says, with Clinton inviting him to fly to Washington on Air Force One; the pair stayed up late into the night at the White House, watching basketball, playing scrabble and talking. Levine has been a key Clinton fundraiser ever since, supporting Al Gore in 2000 and Hillary Clinton in 2008 and 2016, as well as the Clinton Foundation.

Levine considered running for mayor of Miami-Dade County in 2011, though he ultimately passed. He entered the Miami Beach mayoral race two years later, running in part, he says, because he was frustrated by the “analysis paralysis” that had set in at City Hall. He spent $2 million of his own money on the campaign, winning a four-way race with a hair over 50% of the vote.