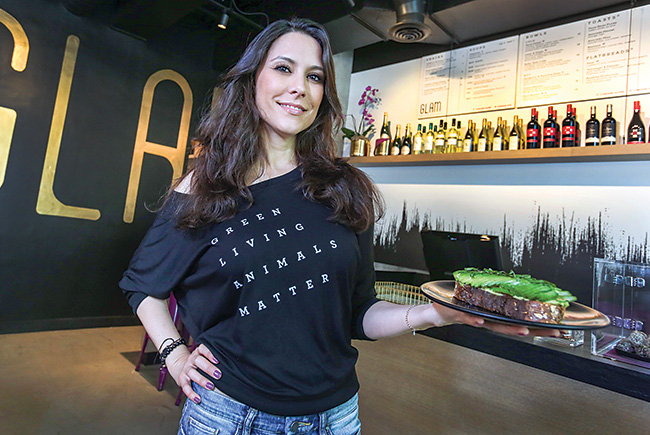 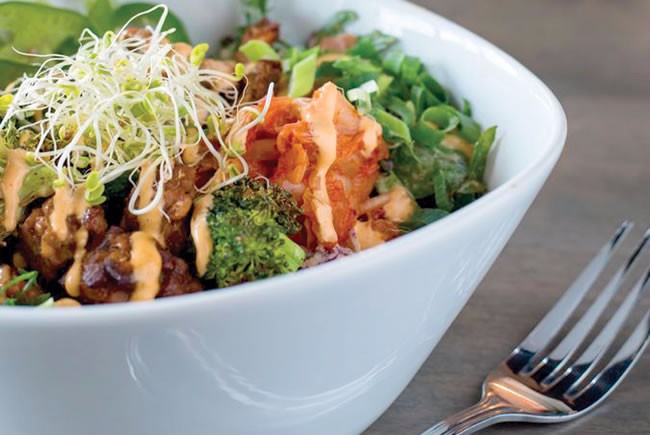 The Sanctum's bibimbap with Korean kimchi.

If you had to guess where a restaurant named GLAM would likely be located and said Miami, you’d be correct. But you probably wouldn’t guess that GLAM stands for Green Living Animals Matter and that it serves a menu that includes watermelon poke, cashew cheese and chocolate avocado mousse.

Yet it has glitz glam, too: A South Beach chef, a smart Midtown location, a hip decor of black and white with flashes of purple, plus bubbly pops of Perrier-Jouet.

Vegetarian chefs have discovered traditional American foods can be meat-free and still hearty and comfy. Who doesn’t like French fries, tomato soup, chili beans, PB&J and, well, apple pie? Or for that matter, watermelon, pineapple, coconut and maple syrup?

The most intriguing growth is in restaurants like GLAM — full-fledged vegan: No leather on servers, no meat, no fish, no eggs, buttermilk or honey and no beers or wines that use animal products in final processings.

Smart vegan kitchens get more from plants with new technology and age-old tricks of spiral-cutting, sun-drying, smoking, compressing and pickling. They add heaps of spice, from ginger and peppers to kimchi.

They use tacos, burritos, pizza and pasta as vessels for veggies, and after years of experimentation are closing in on a good burger.

The best alternatives are made of grains, nuts, coconuts and such, given a good charring and trimmed all the way with mushrooms and heaps of vegan “bacon” and “cheese.”

At Crate in Miami, the house burger mix is kitchari, an ayurvedic blend of mung beans and brown rice with veggies and, for pinkness, beets. Or forget pretending: Chomp into a bun with grilled pineapple inside.

While sticking to their ideals, many new restaurants want to be as polished as a cool bistro or as lusty as a gastro pub.

Flavor by the Plate

“Everyone likes flavor,’’ says Crate chef Chris Baugh, who has hot pepper dingbats all over his menu and loves to slather deli mustard on a grilled (vegan) cheese melt of mushrooms and pickled peppers he happily calls “hot mess.”

Baugh’s high-energy Brickell Village location may sound rustic, but it has shiny décor, including an ice-blue bar. It’s not just for carrot juice and date smoothies. You can get a classic margarita or “Sex on the Beach” until 4 a.m. on weekends.

The fascination with bowls as a one-pot health food has inspired several casual chains like Dirt (two Miami Beach spots and one coming in Brickell) to “eat clean” with hip style.

Using the mix ‘n’ match format, the Bolay chain of Outback pioneer Tim Gannon now has six locations from Palm Beach south. Choose a base, veggies and toppings as vegetarian as you wish. Or pop $2 to add raw tuna, Thai shrimp or jus-y steak.

Fresh Kitchen from Tampa’s Ciccio has taken its somewhat spicier smart-mouth menu and style (#GIVEAFK T-shirts) to five locations from Orlando to Boca.

Also irreverent and not far away is Dixie Dharma, which peddles Deep South vegetarian victuals under the aegis of Ganesh in a baseball cap. It started with a vegan hot-dog cart (add blackened onions) and a food truck and now brick and mortar, serving Carolina pulled BBQ jackfruit, orange sloppy joes, nopales tacos, and, of course, collard greens, tater salad and boiled peanuts.

Nefetari’s Fine Cuisine & Spirits gave Tallahassee a royally plush option three years ago with a worldly menu of Indian samosas, Ethiopian stews, jerk tofu, vegan mac and cheese as well as meat and seafood. Decor is gilt-edged, and the martini list is good-sized.

Some lingo from the vegan world:

Acai (ah-SIGH-ee): Pulped purple berry of a palm tree in Central and South America that tastes like blueberry and is the base of many “superfood” bowls.

Jackfruit: A popular South Asian fruit that when unripe can be used as a substitute for chicken and pork; when ripe, it is sweet and aromatic.

Kombucha: Fermented green tea consumed by itself or in juices and cocktails.

Mylk and Gary: Walnuts, almonds and cashews make vegan analogs of milk, cream and ricotta, cheddar and other “cheeses” or with hipster affection, “Gary.”

Tempeh: Soy cooked and cultured for more flavor and texture than tofu, often used as a meat substitute.

Get Florida Trend's October magazine – print or digital. Select from these options: