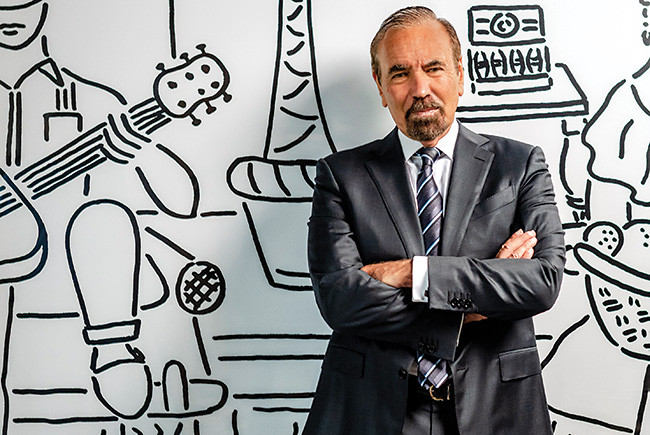 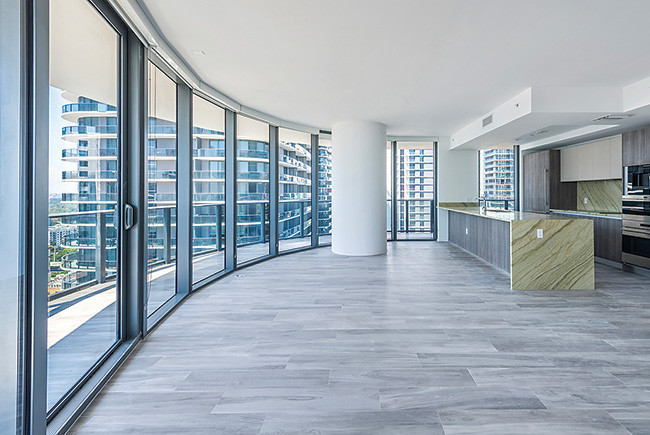 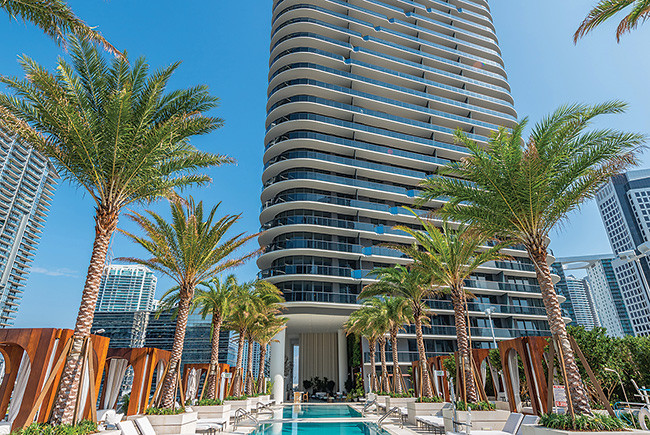 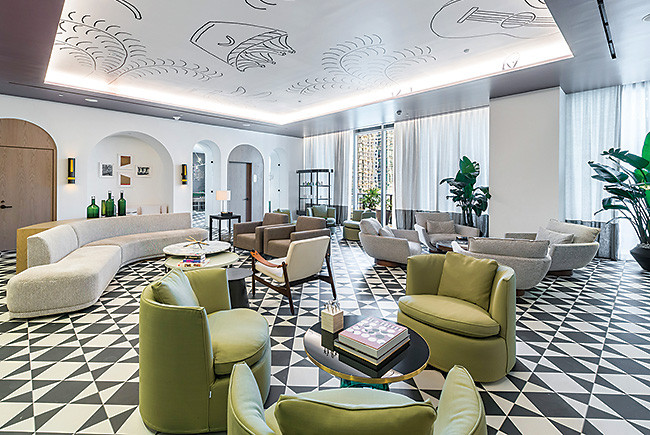 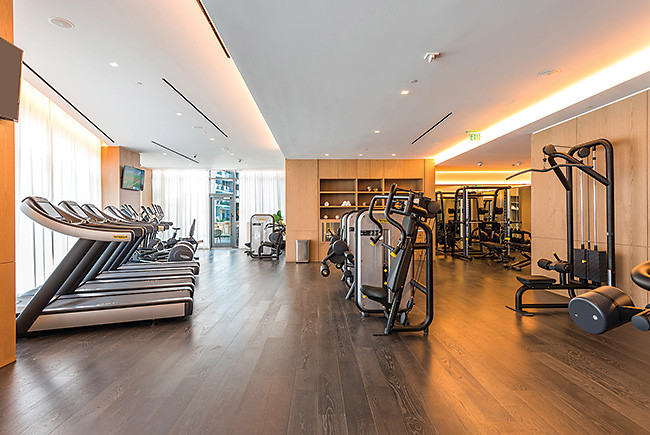 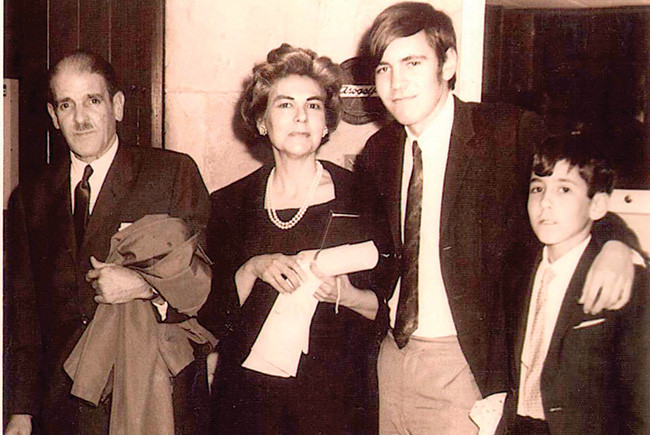 Jorge Perez (circa 1970) with his parents, Raquel Esther and Jorge Antonio, and younger brother, José. Perez’s mother instilled in him a love of art at a young age. 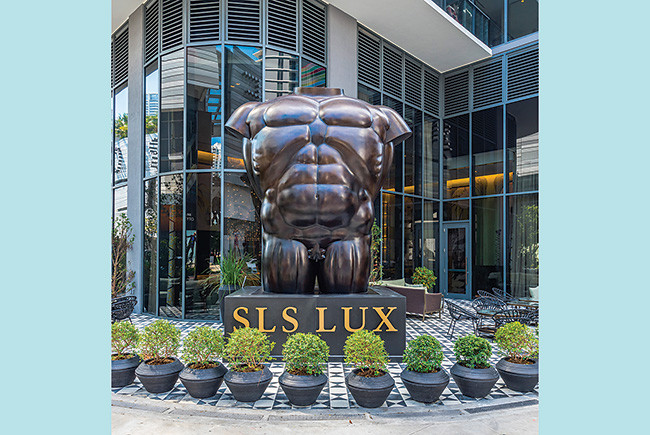 Related paid $3 million for this sculpture by Colombian artist Fernando Botero. The sculpture, called Male Torso, stands near the entrance of SLS LUX, a new condo tower in Miami. Related employs two full-time art curators who commission paintings, sculptures, murals and other art for each project. “The art that we pick is not left to a designer who says, ‘Ooh, we have a blue couch, so we’re going to put up a blue painting,’ ” says Perez. 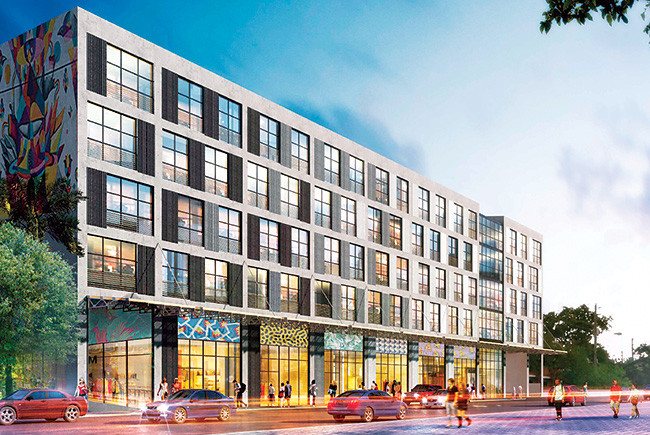 One possible strategy for incorporating workforce housing in downtown projects, Perez says: Micro-units like those at the Bradley project in Wynwood in Miami. 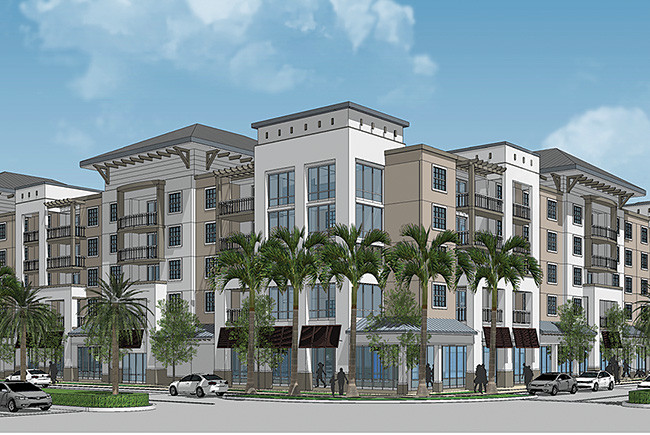 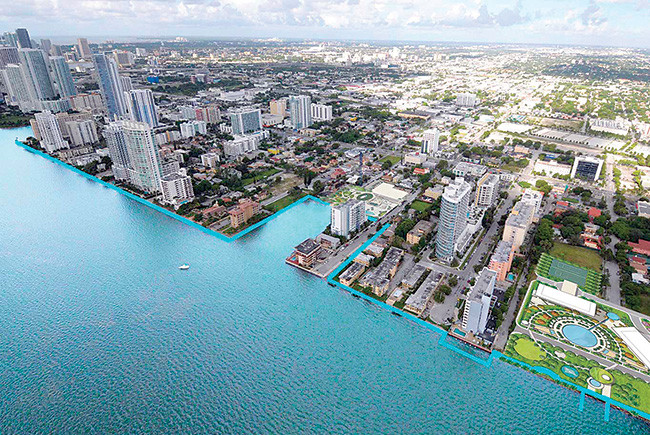 Perez has offered to pay for part of a proposed Biscayne Line public walkway (blue line in photo).

Related Group -- No. 42 on the largest private companies in Florida -- is riding the crest of the downtown development wave with high-end apartment and condo projects in Miami and abroad.

In 1979, Jorge Perez, just starting out as a developer, rehabilitated a small, government-subsidized apartment building for low-income residents in Miami’s Little Havana neighborhood. The building, a 1920s walk-up, had to be outfitted with new plumbing and electrical systems. The renovation also involved adding an elevator to improve elderly residents’ access to the second and third floors. The project took six months and turned a profit of $200,000.

Last month, Perez completed SLS LUX, a 450-unit condo tower in downtown Miami. Among the building’s features: A Katsuya sushi restaurant, one of 14 in the world, along with high-tech elevators that identify residents by their fingerprints and a 59th-floor swimming pool with deck-side cabanas and towel service. The project sold out for a total of $430 million.

In between, Perez rode the condo boom, befriended — then alienated — Donald Trump and worked his way through the recession. By the time he finished SLS LUX, his Related Group had $6 billion in projects underway and more than $1.4 billion in annual sales.

Today, Perez himself is worth $3 billion.

“I had no intention of being a real estate developer,” he says. “In high school, the subjects I loved were philosophy and literature. Business wasn’t even a consideration.”

Born in Argentina to Cuban parents, Perez, 68, grew up as the eldest son of a father who worked in the pharmaceutical industry and a mother whom he describes as a dilettante. At 9, Perez moved to Cuba when his grandfather died, and his father started his own business. A year later, Fidel Castro seized power. “My father was forced to give up his pharmaceutical company and all our family holdings and take us into exile in Colombia,” Perez says in his 2008 book, “Powerhouse Principles.”

Watching his parents start over “scared the hell out of me,” he wrote, “But it also made me damned determined.” He credits what he calls the “Cuba fear” for his work ethic. “It drove me to succeed, to work harder than anyone else, to put money away to have security for myself and my family.” He says his mother, though no communist, taught him that corruption and inequality in Cuba had led to Castro’s rise.

Another experience that shaped Perez was living abroad. In the late 1960s, while getting his associate’s degree at Miami Dade College, he was a hippie, he says, with hair past his shoulders. He followed a girlfriend to New York, finished college and spent a year in Europe. There, he was struck by how different European cities were, with people walking to neighborhood bars and restaurants, shopping locally and making do with smaller apartments and no cars. “I really loved that style of living,” he says.

Looking to merge his social consciousness with his perspective on cities, Perez got a degree in urban planning and a job as a city planner in Miami in the mid- 1970s. He found the public sector “constraining,” however. “I remember people telling me, ‘you’re making us look bad; you’re working too much.’ ”

By the end of the decade, he’d left his city job to compete as a developer for projects like the contract to renovate the walk-up in Little Havana. Among the people he beat out for that job was Steve Ross, then a rising player in New York real estate. The two men became friends and business partners, with Ross helping to provide financing for Perez’s projects.

“From our very first conversation, I found Jorge to be engaging, passionate and very focused — and fun to be around. We immediately hit it off,” Ross says.

While Ross’ New York-based Related Cos. owns about 20% of Perez’s Related Group, they operate independently. The “I never thought in terms of money, but it was a way of counting.” — Jorge Perez two remain “very close,” says Ross. “We travel together, talk several times a week, and our families spend time together. We have known each other almost 40 years, which makes it one of my longest relationships.”

As he branched out from governmentsupported projects into private development, Perez became known for attention to detail and finishing projects on time and on budget. He says he made sure to establish good relationships with building contractors, who, in turn, gave him better pricing and “put their best people on our jobs.” Internally, he created a bonus program tied to company profits to motivate employees to work hard. “You come here at 6 or 7 o’clock at night, and you’re going to see all the developers, accountants and so forth working toward that goal,” he says.

In the 1990s, while continuing to build government-subsidized buildings, Perez tapped into a demand for high-end condos from buyers from South America, who typically fell into one of two categories: Businesspeople who wanted a pieda- terre in Miami or investors looking to rent out their units.

Between the mid-1990s and the mid- 2000s, Related rode the condo boom to become the largest condo developer in South Florida. “We were the golden boy,” Perez says. “Lenders got upset with me if I didn’t give them the financing deal for my next project. They’d fly me on their private jets to their headquarters, and I’d meet and become friends with their chairmen.”

Donald Trump, then a friend and business partner, wrote the forward to “Powerhouse Principles,” saying of Perez: He’s “the one person who could teach me something about real estate.” (Their relationship has since soured — in 2017, Perez, a top Democratic donor and supporter of the Clintons, publicly criticized Trump’s push for a wall on the Mexico border.)

While Perez says he anticipated the market downturn in 2008, he did not foresee how bad it would be. As prices plunged more than 50%, buyers backed out of deals and forfeited deposits, leaving Perez with nearly $3 billion in unsold or unfinished inventory.

During what he considers “the most difficult period of my life,” Perez restructured his debt with lenders, whittled down his inventory and began buying distressed property to position himself for a market rebound. “One of the lessons learned is that we had put too many of our eggs in one basket, and that was the condominium basket,” he says.