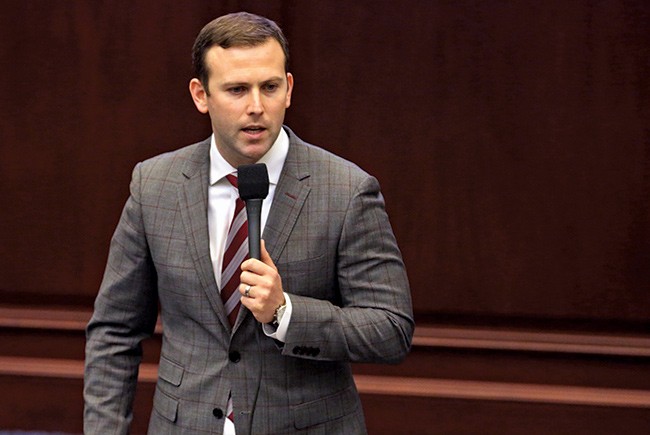 "Try to find out what the right questions are and never be afraid of what the answers might be." Sprowls takes the same approach to legislating that he did as a lawyer. 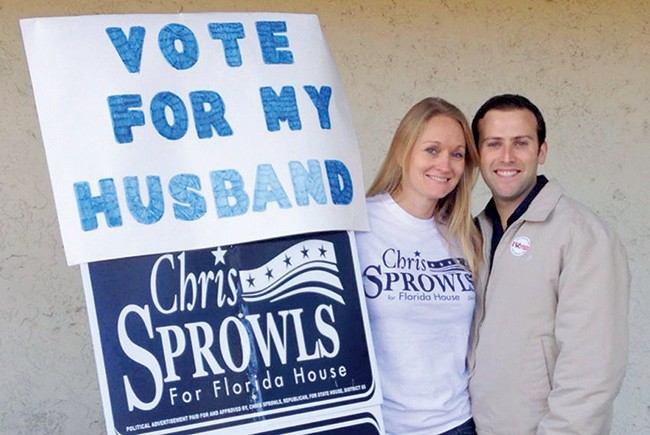 Sprowls and Shannon met at the YMCA where she works and where he worked out. They got married in 2014.
< >

Future House Speaker Chris Sprowls grew up in a home where politics were a dinner-table topic. He became a prosecutor in part on the advice of a famous journalist.

During his seven years as an assistant state attorney in Pinellas and Pasco counties, Chris Sprowls took on gangs, prosecuted murderers and tried dozens of other cases. But as much as he loved the courtroom, he also found the job frustrating. “When I saw defendants or I saw victims, it was as bad as it would get,” he says. “Someone was killed or someone was going to prison for probably decades or more. I got everything at the end of the line.”

Looking to make a difference “on the front end,” Sprowls ran for and won a seat in the Florida House in 2014. In November, the 35-year-old Palm Harbor Republican will have an even bigger influence over state policy when he becomes Speaker of the 120-member Florida House, where he’s earned a reputation as a quiet, determined — and ambitious — leader.

Sprowls — whose family moved to Florida when he was 3 — says his parents sparked his interest in politics. His dad, a retired New York City homicide detective, and his mom, manager of a Palm Harbor walk-in clinic, would talk about politics at the dinner table and with just about anyone who’d engage with them. “They would talk about it all the time,” he recalls. “I kind of developed this compulsion to say, ‘Hey, I should do something.’ ”

By the time he was 14 or 15, Sprowls was volunteering on the campaign of his local congressman, Republican Mike Bilirakis, and during his junior year of high school, he set off for the nation’s capital to serve as a page in the U.S. House of Representatives.

Not long after, Sprowls was found to have Hodgkin’s lymphoma. The health crisis delayed his entry into college as he was treated, successfully, with chemotherapy for approximately eight months. “After that experience, I was kind of in a rush,” he says. “I was in a rush to do the things I wanted to do and to be part of the things I wanted to be part of. I’m not sure that has gone away.”

Sprowls majored in political science at the University of South Florida. He loaded up credits to graduate on time and went on to study law at Stetson University. During law school, he returned to Washington for a summer to clerk on the Homeland Security Committee under then-Chairman Peter King (R-N.Y.). “I wanted to get exposure to how the federal agencies were working together to combat terrorism, both domestically and abroad,” he says.

After earning his law degree in 2009, Sprowls received job offers from both a civil law firm and the state attorney’s office in the 6th Judicial Circuit. A chance encounter with Bob Woodward at a Hillsborough County Bar Foundation Law & Liberty dinner helped him decide which job to take. The legendary Watergate reporter told Sprowls that becoming a prosecutor would be “a great training ground for life,” Sprowls recalls.

During his career as an assistant state attorney, Sprowls prosecuted several high-profile cases. They included the 2012 manslaughter conviction of Betty- Jo Tagerson, sentenced to 13 years in prison after driving her Jeep into a group of children and killing one of them, and the 2014 prosecution of Michael Ortaliz, a 61-year-old Port Richey man who shot and killed his wife’s lover.

His most infamous case was the 2013 prosecution of William Hurst, who was convicted of murdering his wife, Amy, and tossing her body in the Gulf of Mexico. “The unique thing about that one was that it was so old,” Sprowls says. “It was a 1982 homicide — a young woman who was murdered just years before I was born, and I was part of the prosecution to bring her killer to justice.”

Looking back, Sprowls says he better understands what Woodward meant. “It really was a great training ground for how to ask the right questions — and how to figure out a way to come to a just result,” he says. “I try to approach the Legislature in that same way, which is ask what I think are the right questions, try to find out what the right questions are and never be afraid of what the answer might be.”

That approach has also influenced his personal life. Sprowls met his wife, Shannon, at the local YMCA, where she works and where he was working out. He says he struck up a conversation with her as she was getting off work one night. Eager to keep the conversation going, he feigned interest in serving on the YMCA’s advisory board. He and Shannon, who married in 2014, have two boys, Prescott and Conrad.

The same year that he tried the Hurst case, Sprowls launched his campaign for House District 65 — a GOP-leaning district that includes much of northern Pinellas County. In November 2014 — with support from local Republicans and a $306,000 campaign war chest — Sprowls cruised to victory over Carl Zimmerman, a high school teacher and one-term Democrat.

His next big contest wasn’t at the ballot box but inside the halls of the state Capitol as he and then-Rep. Eric Eisnaugle duked it out to become Speaker in 2020-22.

Eisnaugle, an Orlando attorney, appeared to have an early edge. Eisnaugle had served in the statehouse from 2008 until he was redistricted out in 2012, and won a special election that landed him back in the House in April 2014.

Eisnaugle campaigned aggressively for the post and by early 2015 seemed to have locked up the race. But by the end of the year, his support had eroded. Several media reports have traced Eisnaugle’s decline to his aggressive push in 2015 for a controversial contact lens bill that would have prohibited manufacturers from setting prices for their products — a touchy issue that supposedly sparked the ire of House leaders. Meanwhile, influential leaders like House Speaker Richard Corcoran (R-Land O’Lakes) wanted to see a Tampa Bay area lawmaker take the helm of the House after Jose Oliva’s (R-Miami Lakes) term ended.

Sprowls peeled off Eisnaugle supporters until he clinched the contest in early 2016.

His leadership win is good news for the Tampa Bay region, which will gain clout with Sprowls leading the House and Republican Sen. Wilton Simpson leading the Senate (“On the Senate Side,” page 40). The Tampa Bay duo will oversee the 2022 redistricting, a process that will influence Florida’s entire political landscape and likely cement Republican control for another decade.

Sprowls’ personal fortunes have blossomed along with his political career. When he left the state attorney’s office, Sprowls was earning about $75,000 annually. In 2016, he joined the litigation practice of Buchanan Ingersoll & Rooney in Tampa, where he earns approximately $150,000, according to his 2019 financial disclosures. He earns an additional $26,600 annually as a state lawmaker. While his net worth increased from $26,100 in 2014 to $351,600 last year, the dramatic jump resulted from his marriage and the couple’s investment in a new home, which has appreciated more than 32% from $416,000 in 2015 to $550,000 in 2019. Other assets include his $65,350 state retirement investment plan; checking, savings and money-market accounts valued at about $57,800; and various investment funds totaling about $27,316.

Over the past five years, Sprowls has accumulated a string of accomplishments addressing everything from the regulation of ridesharing services to transparency in health care pricing to expanding school choice.

The lawmaker — who served as chairman of the House Judiciary Committee from 2016-18 and now heads the Rules Committee — has also helped reshape criminal justice policy in the state. He championed legislation that has streamlined the process of expunging criminal records for minors and fixed the state’s unconstitutional death penalty law. He also authored a measure enacted into law that will beef up the collection and transparency of criminal justice data in Florida — a move that WIRED magazine said could trigger a “criminal-justice data revolution” and that Sprowls hopes will lead to better-informed policy decisions.

Sprowls is modest about his achievements, but friends and colleagues say his legislative fingerprints are everywhere. “He never tries to take credit for things he’s done. Countless pieces of legislation have been made better because of Chris Sprowls,” Latvala told the GOP conference last fall.

In his Speaker designation speech, Sprowls touched on some of his priorities. Among them: Controlling spending, increasing the state’s reserves and giving state inspectors general more teeth to investigate and refer matters to the state attorney for criminal prosecution.

To the surprise of some, he admonished his fellow Republicans to “stop being afraid of words like climate change and sea-level rise” and encouraged them to find practical ways to mitigate flooding in Florida’s coastal communities. “We cannot afford to put our head in the sand and hope the beach doesn’t disappear against a permanent rising tide,” he said.

On the Senate Side

Wilton Simpson would not agree to be interviewed by Florida Trend about his background or legislative priorities. Born in Lakeland, Simpson is a 1984 graduate of Pasco High School and earned an associate’s degree from Pasco-Hernando Community College in 1997. The owner of an egg business since 1996, Simpson is the Senate’s third-wealthiest member, with a net worth of close to $14.4 million, according to his 2019 financial disclosure form. Fifteen years ago, he founded Simpson Environmental Services, which specializes in asbestos removal, mold cleanup and other environmental demolition and restoration projects and provides his biggest stream of personal income.

In a speech during his Senate president-designation ceremony last fall, Simpson, a Republican, said his legislative priorities included environmental issues, such as sea-level rise and water quality and quantity. He talked about the necessity of finishing a water-storage reservoir project in the northern Everglades and providing incentives to local governments for septic-to-sewage conversions.

In the speech, Simpson also promised to support “common-sense, fiscally conservative principles because they work” and keeping Florida’s tax burden low. Colleagues describe him as a behind-the-scenes leader who works to build consensus.

Read more in our January issue.