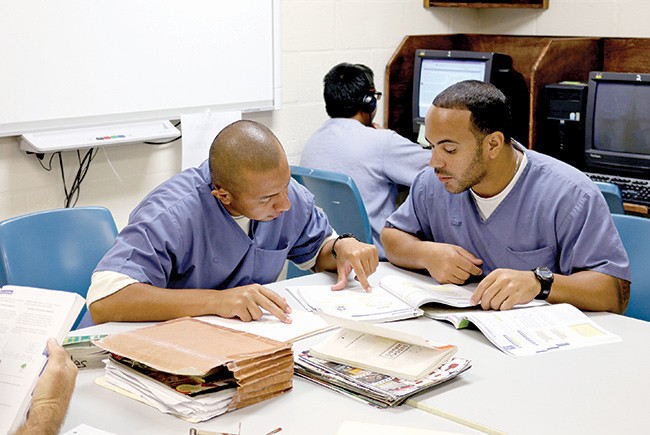 GEO spends 11% of its revenue in Florida on inmate education and rehabilitation. 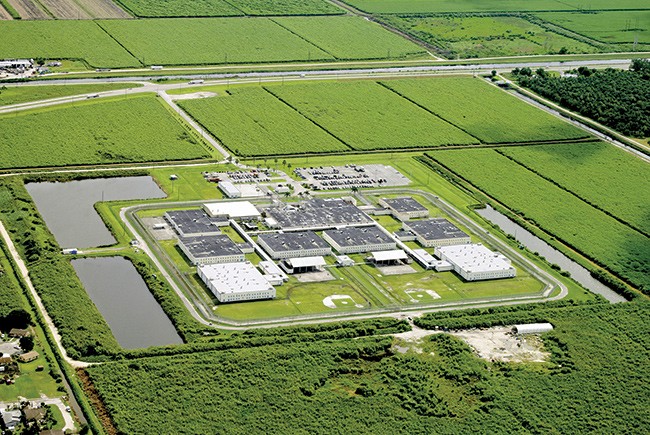 One in four prisoners is serving time for murder or manslaughter at GEO's South Bay Correctional Facility in Palm Beach County.

Private prison operators like Florida’s GEO Group have introduced more programs focused on rehabilitating and educating inmates as the state and nation move away from a policy of mass incarceration.

On a recent weekday morning, about 20 prisoners at South Bay Correctional and Rehabilitation Facility in Palm Beach County gathered in a classroom for a life-skills workshop. The men, ranging from their early-20s to mid-50s, are serving time for both violent and non-violent crimes.

The windowless classroom has 12 computer stations and is decorated with high school diplomas and GEDs earned by prisoners. Above the teacher’s desk, a quote is painted on the wall: “Live as if you’ll die tomorrow. Learn as though you’ll live forever.”

Half of the students in the classroom are new to the prison or short-timers — due to be released within the next year or so. The other half are in for life and have volunteered to be peer mentors in the prison, encouraging inmates to get their GEDs, learn a trade, work on their addiction issues and turn their lives around. The weekly workshop is a way for the students to meet and discuss things like conflict resolution and stress management.

“I’ve been down for 20 years, and if I can touch just one person, then I’ve done something,” says inmate David Jackson, 43, who was sentenced 20 years ago to life in prison for murder, burglary and grand theft. He credits the prison’s education and rehabilitative programs with helping him rebuild family relationships and stay out of trouble.

“I know people can be skeptical, but I’m telling you from 30 years of working in the business, 27 of those in state government, what I see is working,” says Derrick Schofield, an executive vice president for the prison’s contracted manager, Boca Raton-based GEO Group, the nation’s second-largest prison company.

Schofield, a former state corrections commissioner in Tennessee, oversees GEO’s Continuum of Care program, which uses cognitive behavioral treatment — an approach based on the idea that you can change a person’s behavior by changing how they think and feel — to prepare inmates for life after prison. About half of South Bay’s inmates are due for release within one to five years, 26% are to get out in five to 20 years, and the rest are in for at least two more decades. All told, 22% of inmates are in for life.

GEO launched Continuum of Care at two of its facilities in late 2015 and has since expanded the program to 18 facilities, including all five of its prisons in Florida. The program, now in its third year at South Bay, marks an increased focus on inmate rehabilitation for the prison operator as lawmakers nationally and in Florida pursue bipartisan efforts to reduce recidivism and shrink the prison population by releasing non-violent offenders to diversion programs, including substance abuse and mental health treatment. In December 2018, Congress passed the First Step Act, which gives federal judges discretion to skirt mandatory minimums for non-violent drug crimes and encourages prisons to contract with companies for post-release offender services and electronic monitoring — a possible boon to the industry.

Florida’s history with private prison companies dates to 1993, when then- Gov. Lawton Chiles, a Democrat, signed the Correctional Privatization Act over the objections of the state’s top prison officials, saying “a little competition from the private sector should make the (corrections) department better at its core mission.” Two years later, the first three private prisons in Florida opened in Moore Haven, Panama City and Quincy.

Today, seven private prisons, housing about 10% of Florida’s inmate population, operate under contracts with the state Department of Management Services. But no new privately-owned prison has opened in Florida since 2010, and the state has no plans for any new privately run prisons.

And as the financial incentives and political winds continue to shift away from merely housing inmates, the private prison industry’s ability to successfully rehabilitate inmates and reduce recidivism may determine whether it can grow — or even survive.

In Florida, the state requires private prisons to be 7% less costly to operate than their public counterparts. Experts say they achieve the savings through lower staff and administrative costs and economies of scale, though some say comparing public and private prisons is virtually impossible because of differences in inmate characteristics — public prisons generally take the most challenging prisoners, such as those on death row and those with complex medical needs — and because private facilities tend to be newer and less in need of expensive repairs.

The state pays GEO and two other prison companies a contractual per diem rate for their security and operations costs, plus add-on fees for inmate programs and health care services. With $13 million a year allocated for programming, GEO spends 11% of its revenue in Florida on inmate education and rehabilitation, while about 3% of the state Department of Corrections’ budget goes toward programming. Unlike Florida’s public prisons, which limit GED and vocational programs to inmates scheduled for release within three to five years, GEO-run prisons make programming available to all inmates, the company says.

In GEO’s Continuum of Care program, all prison employees go through a two-day training course on “the core skills needed to support cognitive behavioral programming,” such as how to reinforce positive behaviors and discourage negative ones, the company says. The program provides biweekly counseling and case management services to inmates a year before their release and then post-release support from another set of case managers, who check in with them weekly and help as needed with finding a place to live, a job, support groups like Alcoholics Anonymous or mental-health treatment. Post-release services, both voluntary and free, also include access to a case manager, a 24/7 call center and financial assistance for housing, clothing, food, tools for work and job placement assistance.

In 2017, the Legislature began allocating about $3 million a year to GEO to cover most of the program’s costs at South Bay and three other state prisons. The company continues to operate the program at its own expense at Graceville Correctional, one of the two original sites. In all, GEO says it spends about $10 million a year on the program nationwide.

GEO Chairman and CEO George Zoley became interested in the program after the company acquired electronic monitoring firm BI for $415 million in 2011, says spokesman Pablo Paez. Zoley, who declined to be interviewed for this article, said the deal allowed the company to offer its government clients a full range of post-prison services. (GEO continued that strategy in 2017 with its $360-million purchase of Community Education Centers, a New Jersey-based operator of halfway houses.)

“It takes a lot of work to get people to understand what are the triggers for their behaviors and what are the consequences of their decisions,” says Schofield, who joined GEO in 2016 after a rocky tenure as commissioner of the Tennessee corrections department, where he took heat over reports of prison overcrowding and increased violence, among other things.

“Over the years, we’ve heard that if you provide meaningful employment and suitable housing, people will stay out of prison. Well, that’s part of it,” he says, adding that effective in-prison programming also is key to helping ex-offenders lead a crime-free life. “There’s no magic wand.”

GEO says programs like Continuum of Care show the benefits of privatizing prisons. Without the bureaucracy of a government agency, GEO says, private prisons can be more nimble and innovative. Critics of privatization counter that it’s unethical for any company to profit from confining people and could lead to prisons cutting corners to save money. They also point to research generally showing that private prisons are no better at reducing recidivism than public prisons.

The debate over privatization has intensified in recent years, with the American Civil Liberties Union and other activist groups accusing GEO and its main competitor, Tennessee-based CoreCivic, of profiting from the Trump administration’s immigration policies. In 2018, 20% of GEO’s $2.3 billion in revenue came from managing federal immigrant detention centers, up from 18% in 2015. GEO faces several lawsuits alleging that it violates minimum wage and other laws by forcing detained immigrants at its facilities to work for free or $1 a day. According to the lawsuits, detainees who refuse to do things like clean bathrooms and mop floors can be punished with a loss of recreation time or solitary confinement. GEO denies wrongdoing, saying its federal contracts require that detainees be responsible for personal housekeeping.

Meanwhile, every major candidate for the Democratic U.S. presidential nomination has spoken out against private prisons, and big Wall Street banks, including JPMorgan Chase, Wells Fargo and Bank of America, say they won’t make new loans to the industry. As a real estate investment trust, GEO is required to pass at least 90% of its pre-tax income to shareholders, leaving it with little cash and a hefty reliance on borrowing to expand or survive.

Last year, California and Illinois banned private detention centers, and Nevada outlawed the use of private prisons for core services, such as housing and custody. As of February, GEO was trading at about $17 a share, well below the $30 range from the early days of Trump’s presidency.

GEO also has been a lightning rod in its hometown. In 2013, it agreed to stop pursuing a $6-million deal for the naming rights to Florida Atlantic University’s football stadium after the plan drew criticism from faculty, students and community members. Critics dubbed the proposed GEO-sponsored stadium “Owlcatraz,” a play on FAU’s owl mascot. More recently, a small group of activists protesting the detention of illegal immigrants used tar and cement to attach themselves to the company’s headquarters, blocking its entrances until police were able to remove them.

For now, at least, Florida appears likely to follow the model set by the federal First Step Act, which seeks to create a fairer and less-costly federal prison system by curbing mandatory minimums and providing incentives for inmate rehabilitation.

“Based on the political mood out there today, you could privatize some functions in prisons, but not privatize the whole facility,” says state Sen. Jeff Brandes, R-St. Petersburg, a leading advocate for prison reform in Florida. “There’s a role for privatization in prisons. I just don’t think there’s a growing role for private prisons.”

GEO is led by George Zoley, a Greek immigrant who holds bachelor’s and master’s degrees from Florida Atlantic University and a doctorate in public administration from Nova Southeastern University.

Zoley, 70, launched GEO in 1984 as the prisons division of Wackenhut, a security guard company based in Palm Beach County, where he was then vice president of government services. The division, initially called Wackenhut Corrections, became a wholly-owned subsidiary of Wackenhut in 1988 and a separately traded public company in 1994. In 2003, a management group led by Zoley raised money to buy a majority stake in Wackenhut Corrections, renaming it GEO.