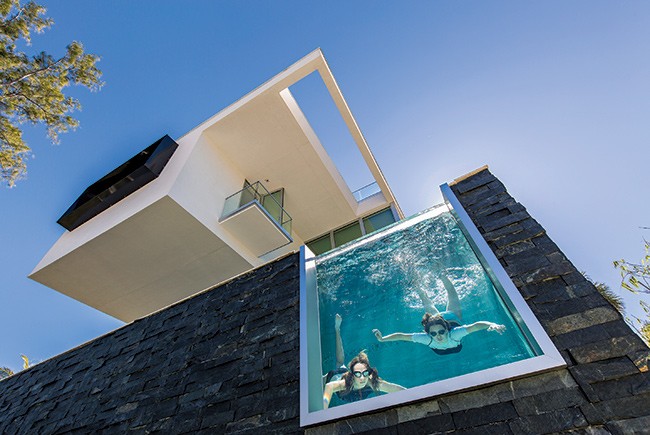 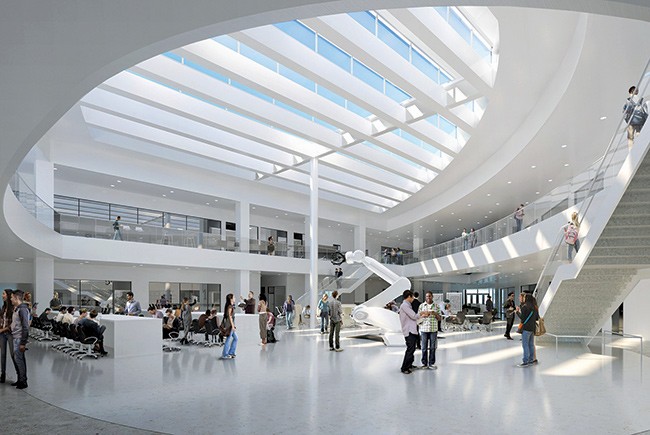 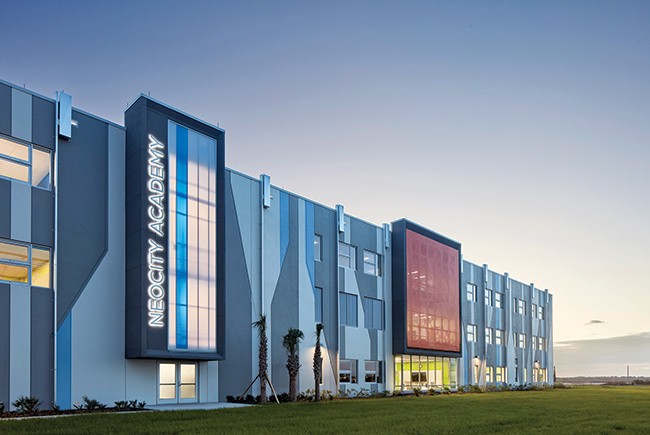 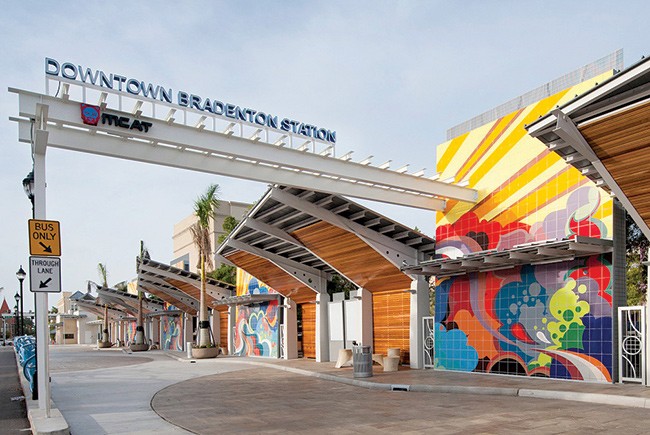 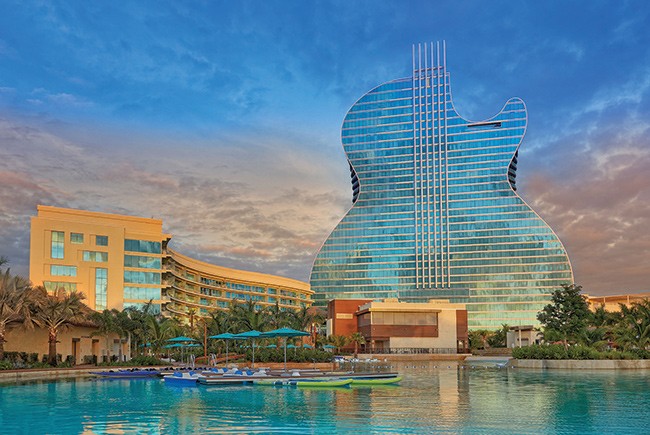 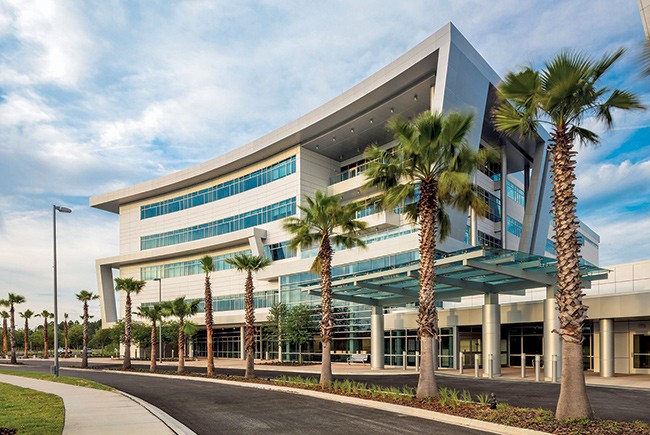 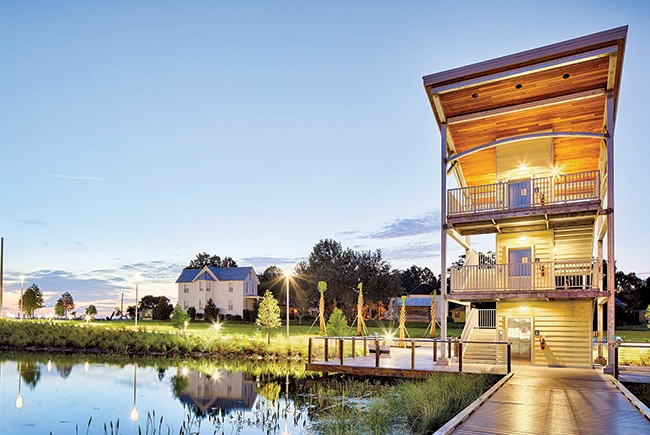 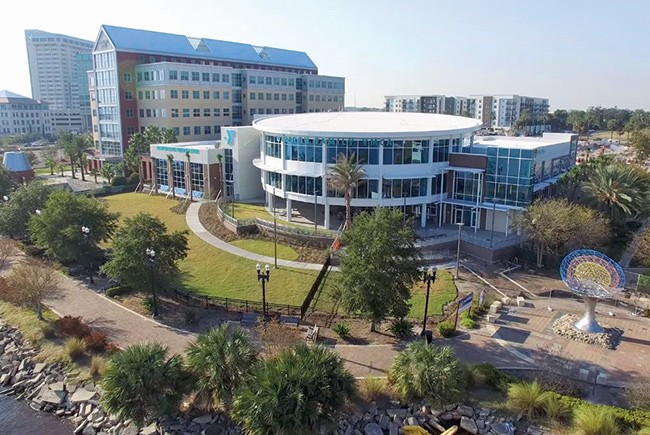 About: An instant Florida icon, the Guitar Hotel opened in November as part of a $1.5-billion expansion of the Seminole Hard Rock & Casino in Hollywood that also included a 13.5- acre pool and lagoon with overwater cabanas, a new performance space and expanded gambling floor. The 638- room hotel reaches 450 feet into the sky with floor-to-ceiling glass panels. LED lights built into the hotel add a light show across the facade while six lasers project six guitar strings 20,000 feet upward. The building was designed by Steve Peck of Klai Juba Wald Architecture, with engineering done by DeSimone Consulting Engineers along with Boston lighting designer DCL and Montreal digital player Float4. Hotel interiors were done by Wilson Associates and Rockwell Group.

About: This seven-story, 800-car garage (with space for ground-floor retail) is hidden by multiple exterior works of art. Architect Terence Riley commissioned exterior artwork from WORKac, J.Mayer.H, Clavel Arquitectos and Nicolas Buffe to add to his own firm’s designs. None knew what the others were planning or exactly where their piece would be placed on the garage. It fits in with developer Craig Robins’ (of DACRA) overall art-focused vision for the neighborhood, which also includes other highart garages. The artworks are called “Barricades,” “XoX,” “Urban Jam,” ”Ant Farm,” and “Serious Play.”

About: When 22squared, an advertising agency with offices in downtown Tampa, wanted its space to better represent the company’s lively culture, it turned to design firm ASD | SKY. The result is an open workspace featuring different work “neighborhoods” and plenty of colorful furniture and art. The redesign won a 2017 people’s choice award from AIA Tampa Bay, a chapter of the American Institute of Architects.

About: The 62-story, 82-unit luxury condo (rendering at left) was one of the final designs of the late architect Zaha Hadid. Its concrete exoskeleton is a structural frame that is thicker than required, which allows most of the units to be column-free. The city’s first private rooftop helipad will top off the building, now under construction.

About: Most homes hide the swimming pool in the back yard behind a fence and tall foliage, but this Anna Maria Island residence has a pool where anyone can see — elevated to the second floor and visible from the yard behind a sheet of 3-inch-thick Plexiglass.

About: The Downtown Bradenton Station is a burst of color amid a drab area just south of the city’s downtown. The 21,780-sq.-ft. plaza acts as a central hub for Manatee County Area Transit buses and features automated ticketing, a six-bay bus transfer station and offices.

About: Florida Polytechnic University's $40-million Applied Research Center stands out with linear wings linked by a sun-lit atrium. It’s due to be completed in 2021 and will be visible from I-4.

About: The Hub is an outdoor, family-oriented entertainment complex providing food and beverage services. The facility’s design recently won kudos from the Northwest Florida chapter of the American Institute of Architects. The pavilion’s stage is designed to accommodate orchestra, dance and theater performances. AIA judges said the entertainment venue’s design is “nicely scaled” with “good use of architectural rhythm.”

About: In 2014, Fairwinds Credit Union decided to renovate its aging administrative campus. The two existing buildings were slated to be reskinned, but one was beyond repair and had to be demolished. It was rebuilt and connected to the other building via a glass atrium that serves as an entry point for employees and visitors. Notable interior features include a centralized staircase that promotes exercise and open workspaces that encourage collaboration. The contemporary exterior incorporates shading to protect against the sun, including a folding plane that provides a layer of protection and perforated metal shading fins suspended from the building’s facades to reduce glare and solar heating. Jim Hair, president of Little’s Orlando office, says the project is a “great example of repurposing existing assets” when possible.

Museum of the American Arts and Crafts Movement

About: Scheduled to open by the end of this year, the $90-million Museum of the American Arts and Crafts Movement will house Rodolfo “Rudy” Ciccarello’s extensive collection of arts and crafts pottery, furniture, lighting and other objects and feature a spiral staircase. It will be the only major museum in the world devoted solely to the arts and crafts movement.

About: CID Design Group, founded by a mother-daughter duo, won an Aurora award from the home-building industry for the project with its gourmet demonstration kitchen, yoga studio, pet spa, billiards room and hammock lounge/outdoor living space, resort pool, fitness room, co-work and flex-office spaces. CID has a full-time trend forecaster who researches how best to design for target markets, set projects apart from others and deliver designs with long-lasting use to reduce wasteful design. It’s also won awards and received attention of late for Kalea Bay in Naples, Yard 8 in Miami and Avalia in Boca Raton.

About: The $100-million expansion designed by Pritzker Prize-winning architect Lord Norman Foster opened in February 2019 to rave reviews from architecture critics. Respectful of the original Art Deco-style building created in 1941 by architect Marion Sims Wyeth, the expansion includes moving the main entrance to South Dixie Highway, where a giant eraser sculpture and reflecting pool greet visitors. The expansion increased gallery space 35%. “The design celebrates the local landscape and architecture, taking advantage of the museum’s excellent location in the heart of West Palm Beach and transforming the landscape to create a museum within a garden,” Foster said. The contractor was Gilbane Building, executive landscape architect was EDSA and the executive architect CBT. The museum collection includes works by Gauguin, Monet and other masters.

About: A cultural and meeting venue that’s part of the six-block Faena District development of hotels, restaurants and retail space, the Faena Forum includes two exhibit halls and a 2,900-sq.-ft. amphitheater made of rose marble. The entire building is 42,565 square feet, divided into a cylinder and a cube. Inside, a circular stairway descends from a 46-foot cantilever. The stairway leads to the lobby, elevated to accommodate future rising sea levels. The building has 350 windows that look over outdoor public spaces and Indian Creek.

About: Located across the street from a sensor manufacturing facility called BRIDG, NeoCity Academy is among the first components of a planned technology district on 500 acres in Osceola County. The STEM-focused public high school was designed to use 76% less energy than a traditional school — and has the potential to be net positive, generating more energy than it uses over a year. A total of 650 solar panels dot the school’s roof, dining canopy and food truck canopy. (There’s no traditional kitchen or cafeteria at NeoCity.) Other energy-efficient design features include sensors that control lighting, HVAC and ventilation; a building skin that prevents air leakage; and windows that block ultraviolet light but allow high levels of visible light.

About: A three-year, $150-million, LEEDcertified renovation of the 1,200-employee site will wrap in 2021. The renovation features a cafe, a sports complex and a conference and training center. Rainwater from the new garage roof will flow into tanks with a 240,000-gallon capacity that should provide 65% of the site’s irrigation needs. Solar arrays will produce 20% of site energy use.

About: More than just a recreation area, Victory Pointe Park in Clermont is a stormwater treatment system that collects runoff from the downtown streets and filters it through a series of ponds and marshes before it flows into Lake Minneola. One of the key attractions is the 40-foot observation tower that sits at the center of the 10-acre site. From that vantage point, visitors are treated to views of Triathlete Beach, elevated trails, the lake and parts of downtown Clermont. The site also has become a catalyst for downtown redevelopment because businesses no longer need to create their own runoff retention areas.

About: UF Health North was designed to reflect the salt marshes of the surrounding Timucuan Ecological and Historic Preserve. The building has a similar ribbon of oxbows across its facade. Phase one was completed in 2016. Phase two, a 92-bed full-service hospital, was completed in 2017.

About: While most of the luxury vacation homes in Golden Oak (a private residential community in the center of the Disney World complex) have a traditional European feel, local architect Phil Kean designed Nyumbani to be a modern oasis. Nods to mid-century modern architectural icons, such as Frank Lloyd Wright, are visible throughout — from the home’s sweeping indoor/outdoor living areas and vanishing-edge pool to its centrally positioned, four-sided glass and stone fireplace. Nyumbani — which means “home” in Swahili — has its own exercise suite (complete with sauna and steam shower), a home theater and a detached casita, or guest house. The 8,589-sq.-ft. spec home has six bedrooms, six full baths and three half-baths and is listed at $7.9 million.

About: Maximizing the facility’s riverfront location and downtown views was an important consideration in the Winston Family YMCA’s building design, says Brandon Pourch, an architect with Reynolds, Smith and Hills and the 2020 Jacksonville chapter president for the American Institute of Architects. “Most YMCAs and fitness centers are not in that prominent a location,” Pourch says. A large elliptical drum on the third floor, which serves as a running track, became the main driving element of the design. The 71,000-sq.-ft., $20.2-million project was awarded the Jacksonville Downtown Vision Project of the Year for 2016.

About: The building will include greenhouses, an auditorium and a museum to house the school’s nationally recognized collections of insects. The centerpiece is an expansive atrium that ties together classrooms and labs while fostering an open and collaborative academic environment.