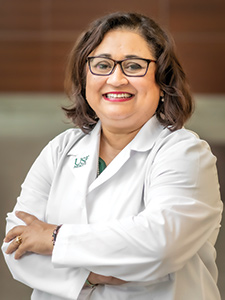 Usha Menon, dean of the University of South Florida’s College of Nursing and a senior associate vice president of USF Health, says she gets “chills” when she reads current research concerning job satisfaction among nurses. One study, she points out, published by researchers at Emory University before the pandemic, found that nearly one-third of the nurses who quit the profession cite burnout. Another study, published this year in the Journal of the American Medical Association Psychiatry, found that the suicide rate among nurses was more than twice the rate of the general public and 41% higher than that of physicians.

“It makes me fear for the future of the profession,” Menon says.

As a result, USF is stepping up its efforts to produce more nurses to address the nationwide nursing shortage — as well as working to better prepare its graduates for the realities of what they’ll experience once they’re on the job, from inadequate staffing to emotional stress.

Along with boosting its efforts to recruit more nursing students, USF is increasing enrollment in its accelerated nursing pathway program. At USF’s Sarasota- Manatee campus, for example, the program’s enrollment has doubled to 80 since 2020, while the St. Petersburg cohort has grown from 30 to 50 since 2019. The initiative is tailored for students who already have a bachelor’s degree and are looking to earn a bachelor’s in nursing, which they can get in four semesters.

“We are proactively working to address the growing need for additional nurses in Florida,” Menon says. “Many of our students remain local post-graduation. The increase in graduating nurses will have a direct impact on our very own nursing community.”

But more than producing additional nurses, Menon says USF is also trying to increase the likelihood that its graduates will stay on the job long term. She says reducing turnover will be key to reversing the nation’s nursing deficit, currently estimated at about 1.1 million. The profession, she says, has always dealt with experienced nurses “aging out” of the profession and moving on, but now, she says, “younger nurses are leaving,” often before reaching a year on the job.

To help address that, USF has initiated a “preceptorshipto- hire” program at Sarasota Memorial Hospital to help ease the transition from academia to professional practice, with a goal of reducing quick turnover among recent graduates. Other programs, using webinars and podcasts, focus on mental and physical wellness to help nurses deal with the on-the-job stresses that Menon says are leading to burnout and turnover.

“They have to be well-trained, well-prepared, and they have to be ready to enter a workforce that is in crisis,” Menon says. “We’re not sending nurses out to work in a fairy-tale world.”