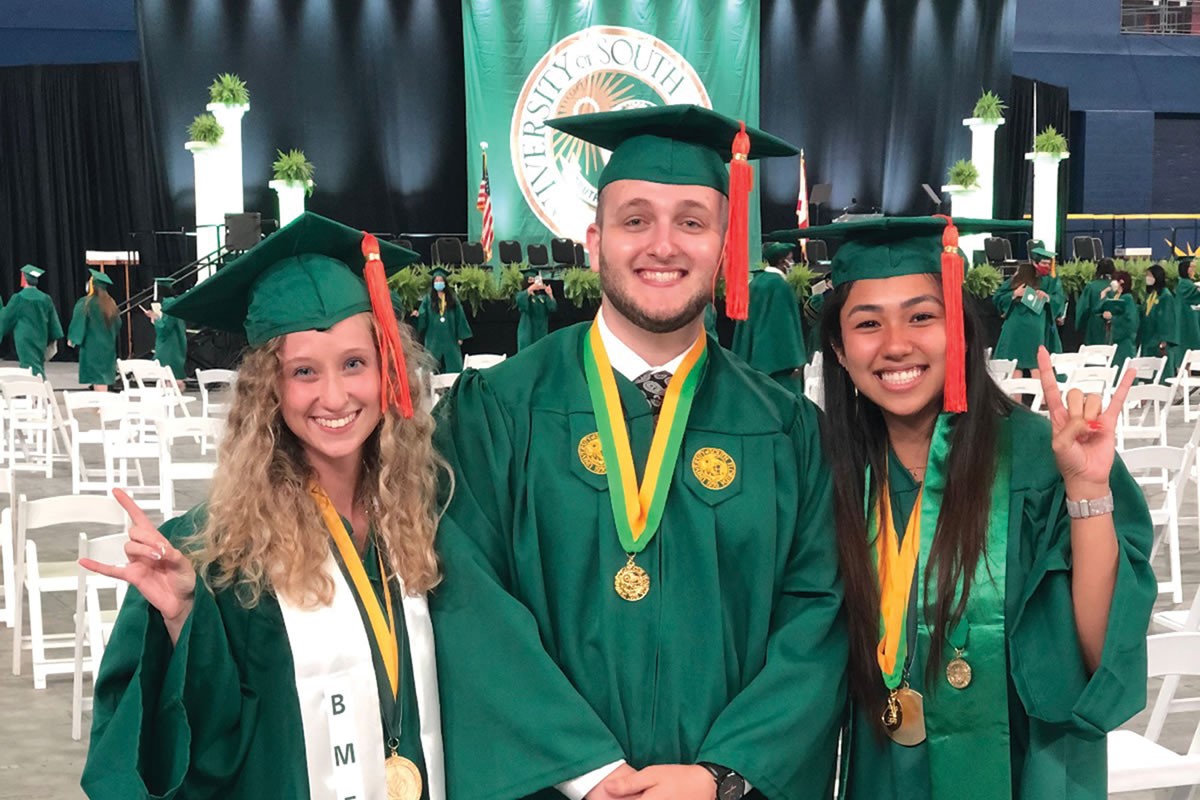 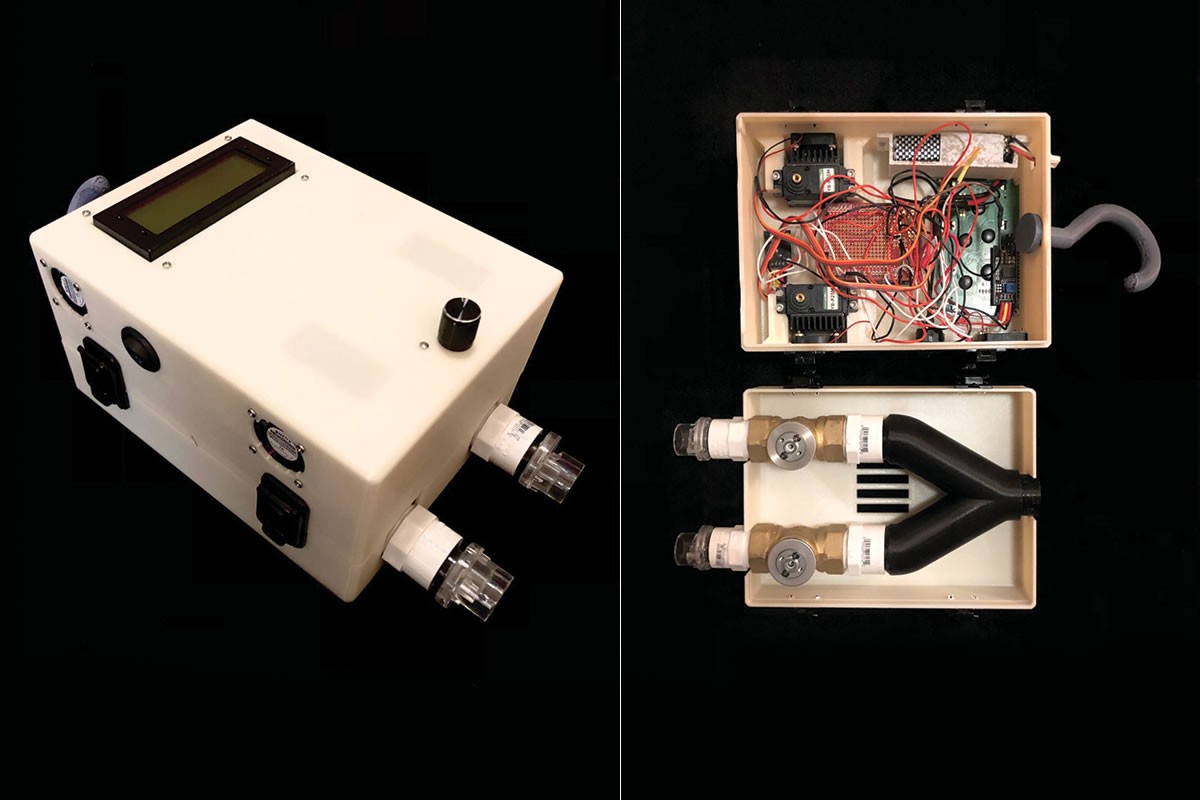 Made with just $200 of materials, the Eucovent makes it possible to ventilate two patients independently.
< >

All University of South Florida biomedical engineering seniors take a yearlong capstone course that begins with health care-related companies presenting them with problems to solve. A trio of 2021 USF summa cum laude biomedical engineering graduates — Abby Blocker, Carolyna Yamamoto Alves Pinto and Jacob Yarinsky — spent their senior year working with mentors at the university and at Moffitt Cancer Research Center. Their project: Engineering ventilators — the devices that force oxygen into a patient's lungs — so that a single machine can serve two patients simultaneously — and safely. “When we got paired together, we all said, ‘Hey, we are three great minds; let’s make something awesome,’ ” Yarinsky recalled.

The students created five prototypes before they settled on one they called Eucovent, Yamamoto says, made with $200 of materials they 3-D printed or bought.

In hospitals, one ventilator typically serves one patient. As the number of COVID patients exceeded the number of ventilators during the height of the pandemic, some institutions resorted to ventilator “splitting” — essentially dividing one large puff of air into two equal-sized puffs in order to serve two patients simultaneously. Health officials warned the approach wasn’t safe and could lead to lung trauma, however, because the two patients might need vastly different levels of oxygen.

The Eucovent, which attaches to a ventilator, takes a “timed multiplexing" approach — rather than generating one puff of air, the ventilator supplies a custom-sized puff to one patient, then switches quickly to provide the second patient with a different-sized puff of air before alternating back to the first patient. The approach could enable the same ventilator to serve, for example, both a 250-pound man and a 125-pound woman or a child. “Ours is more of a personalized experience for each patient, which we think is a safer solution compared to others,” says Blocker.

The Eucovent also could extend the capacity of ventilators in times of crisis, like during COVID, and in rural areas and emerging markets where ventilators are often in short supply.

Dr. Aaron Muncey, a Moffitt anesthesiologist and one of the team’s mentors, calls the students’ multiplexing approach a breakthrough. "These students are absolute all-stars.”

The USF team took first place in the National Institutes of Health’s DEBUT competition, beating out students from Harvard, Stanford, Rice, Columbia, Georgia Tech and other universities. “For us, that was the spark that this could be more than a successful capstone project,” Yarinsky says. “This could be the future of co-ventilations.”

After the students graduated last spring, Blocker worked at Moffitt during the summer and on Eucovent in the fall. With an interest in emerging markets, she is pursuing a biomedical engineering master’s at the University of Cape Town. Yamamoto, who grew up in Brazil and moved to the U.S. with a USF scholarship, is earning a biomedical engineering doctorate at Johns Hopkins in Baltimore. Blocker and Yamamoto remain involved with Eucovent.

Yarinsky has landed a full-time research job at Moffitt and is putting the Eucovent device — which hasn't been used on actual patients in a hospital — through stress-testing with “test lungs.” That involves modeling a wide range of scenarios to determine how the prototype reacts. Eventually, the device could be constructed using medical-grade materials.

Yarinsky and the Moffitt mentors are also working with a second group of USF biomedical engineering seniors — Sai Addala, Cristian Benito Elias, Estelle Toto-Lobe and Pascual Jahuey — who have taken on the Eucovent project this year as their senior project.

“As you get more and more smart people involved, the idea evolves, and it takes a life of its own. The changes we are making on it now are the next steps of that,” Muncey says.

“We are working on adaptive feedback” so that ventilation can be adjusted in real time, Muncey says. “For patients who are sick, their needs may change over time, and you need a device that can adapt to that. The new students are working on integrating sensors into the prototype, as well as new programming for the micro-controller and more hardware changes on top of that.”

Commercializing the technology will likely involve applying for FDA approval and the related testing. A ventilator company could eventually purchase the technology through USF’s tech transfer process and take it to market, Blocker says. Future iterations of the device could potentially help three or more patients at a time. In the meantime, Blocker, Yamamoto and Yarinsky are eager to see what this year’s student team comes up with.

“New people bring new ideas — they will think of things that we didn’t see at the time, so it just keeps improving. Our mentors are showing their interest and support with patent applications, and we have a patent pending, and they are putting us in touch with companies that sell ventilators. We’re really excited, and we think it will be a reality in hospitals,” says Yamamoto.

“For us to have the opportunity to McGyver around is pretty cool,” adds Heiko Enderling, a Moffitt research scientist in integrated mathematical oncology who also has been working with the student teams. “But these students have been taught the latest and the greatest. It is just amazing what they can do if you just allow them.”

Blocker took her pitch to a ballroom full of investors at the Florida Venture Forum’s Early Stage Capital Conference last October, where the Eucovent team shared first place in the state collegiate competition: “You don’t want to miss the next opportunity to change the world.”