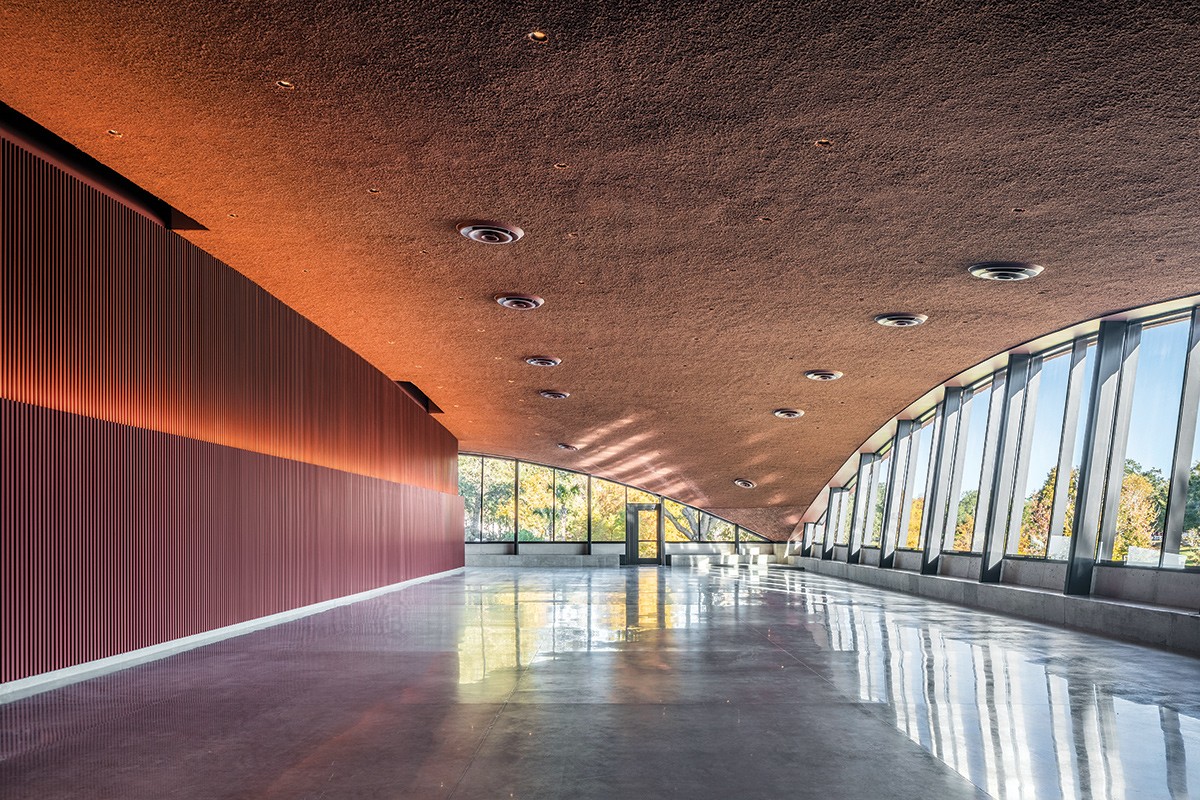 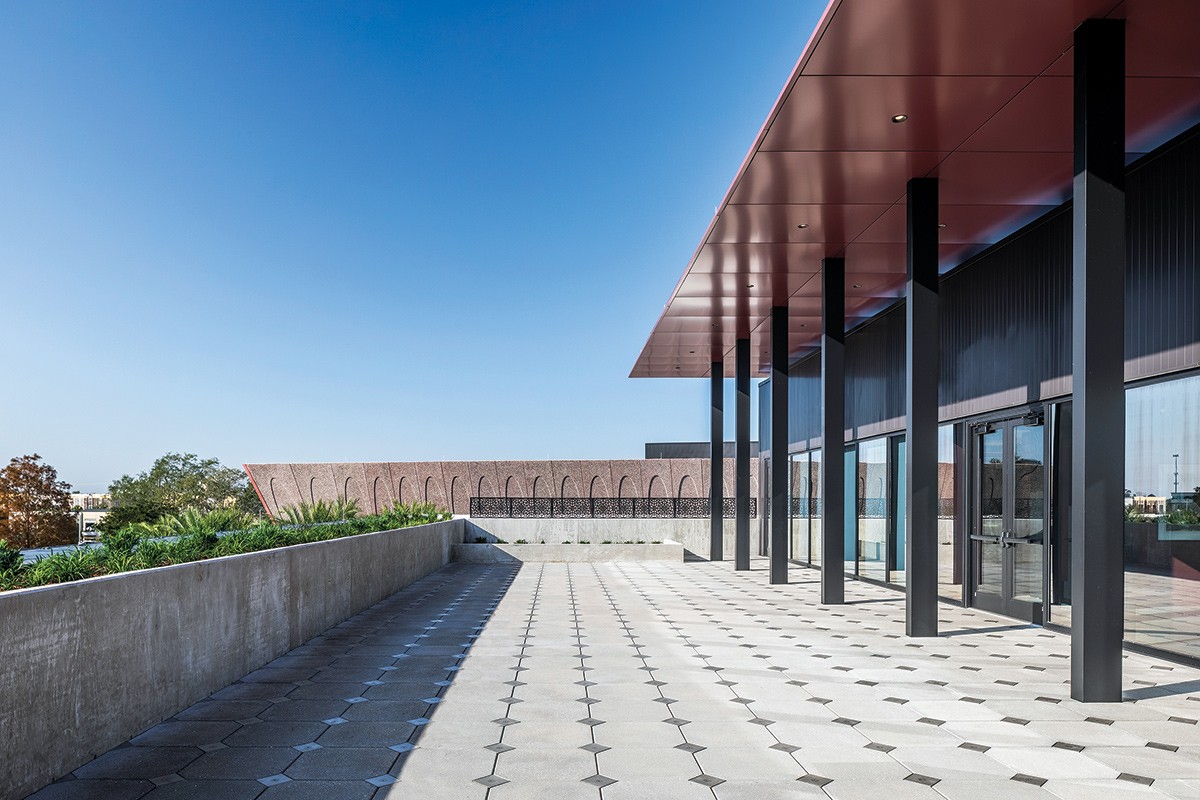 The three structures of the "knowledge campus" are made of rose-tinted concrete. 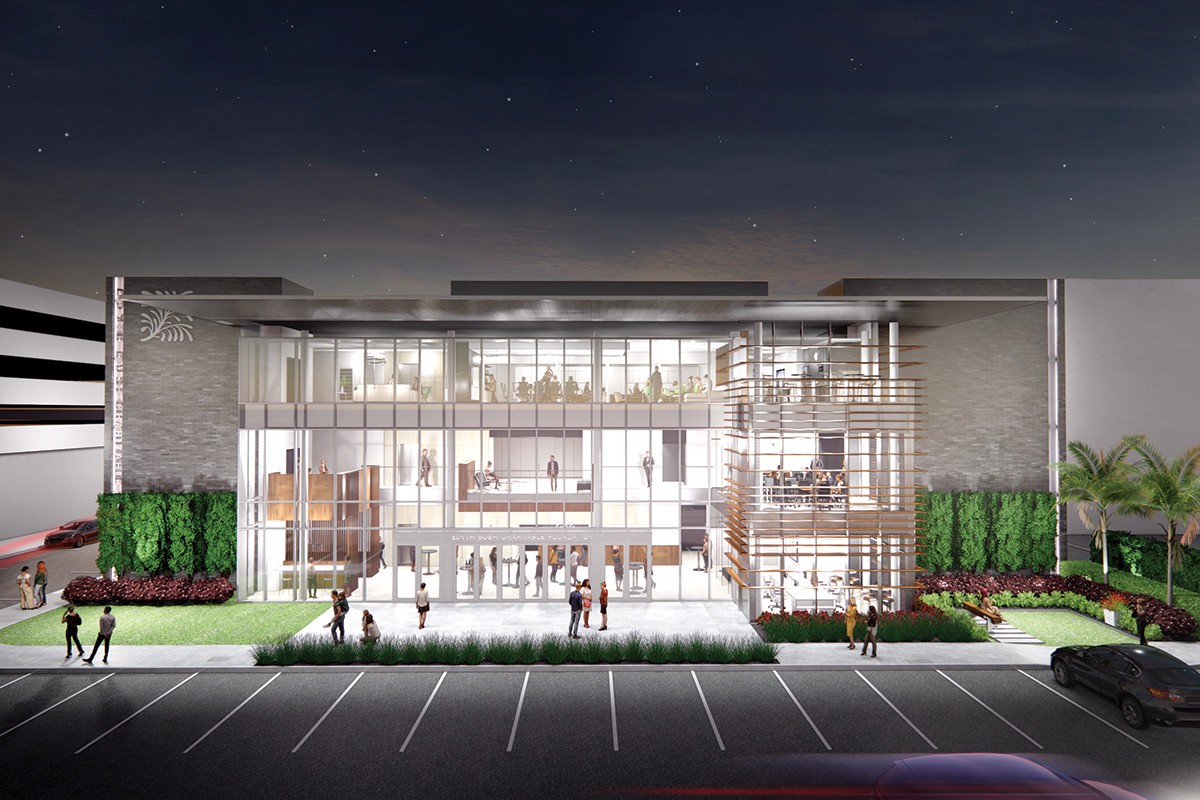 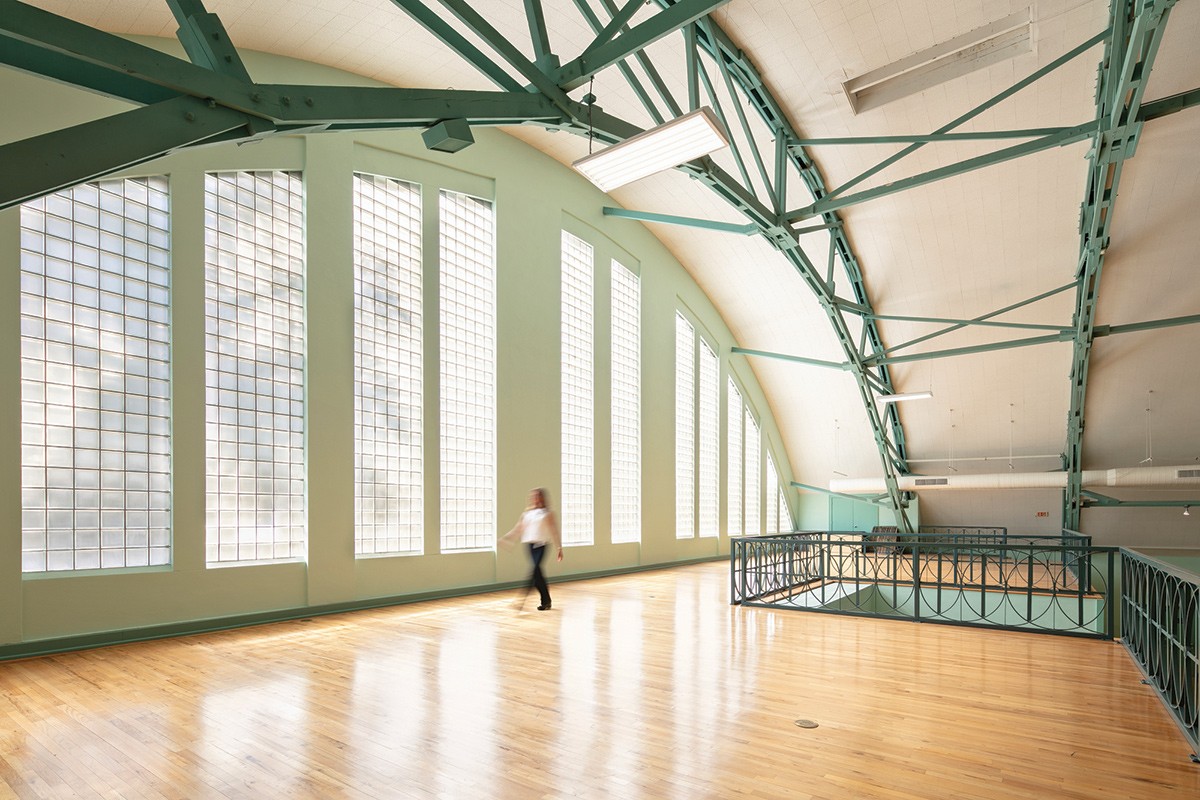 The windows of the Sarasota Municipal Auditorium in Sarasota are designed in an historically accurate Art Deco style. 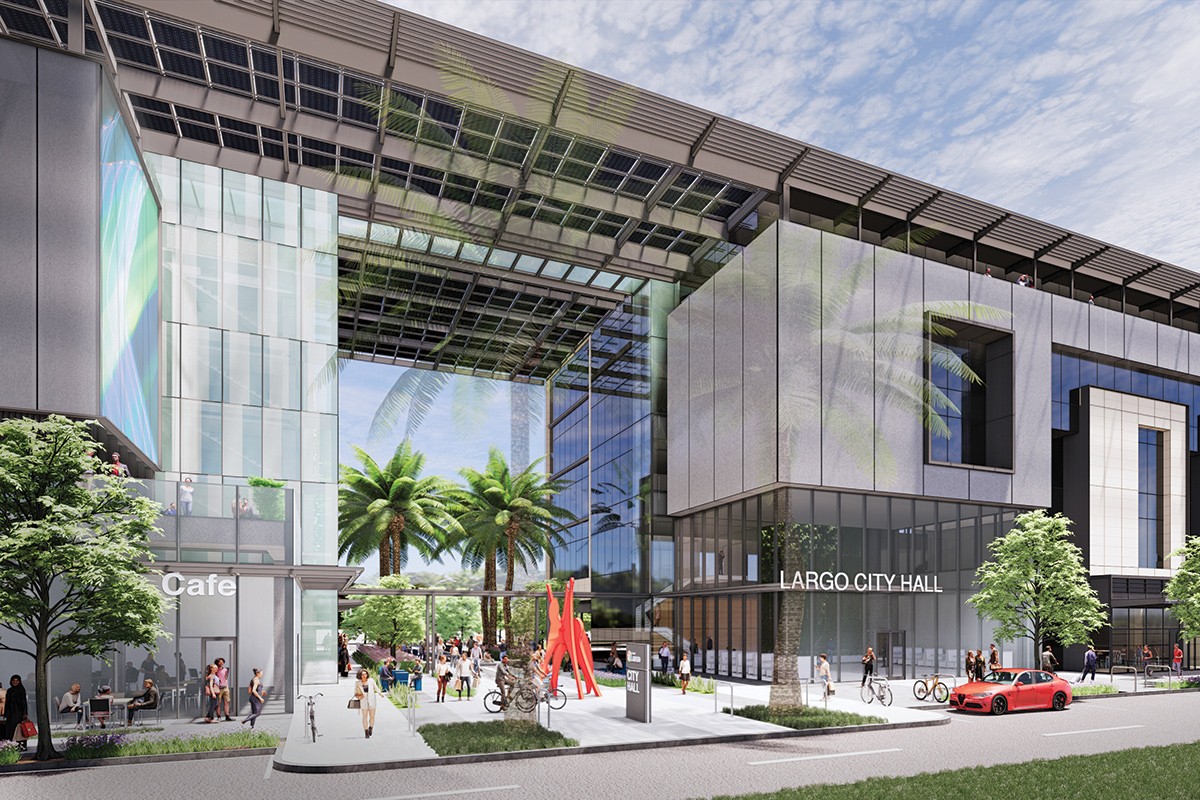 Largo City Hall has already won the 2021 sustainability award from the Tampa Bay chapter of the American Institute of Architects. 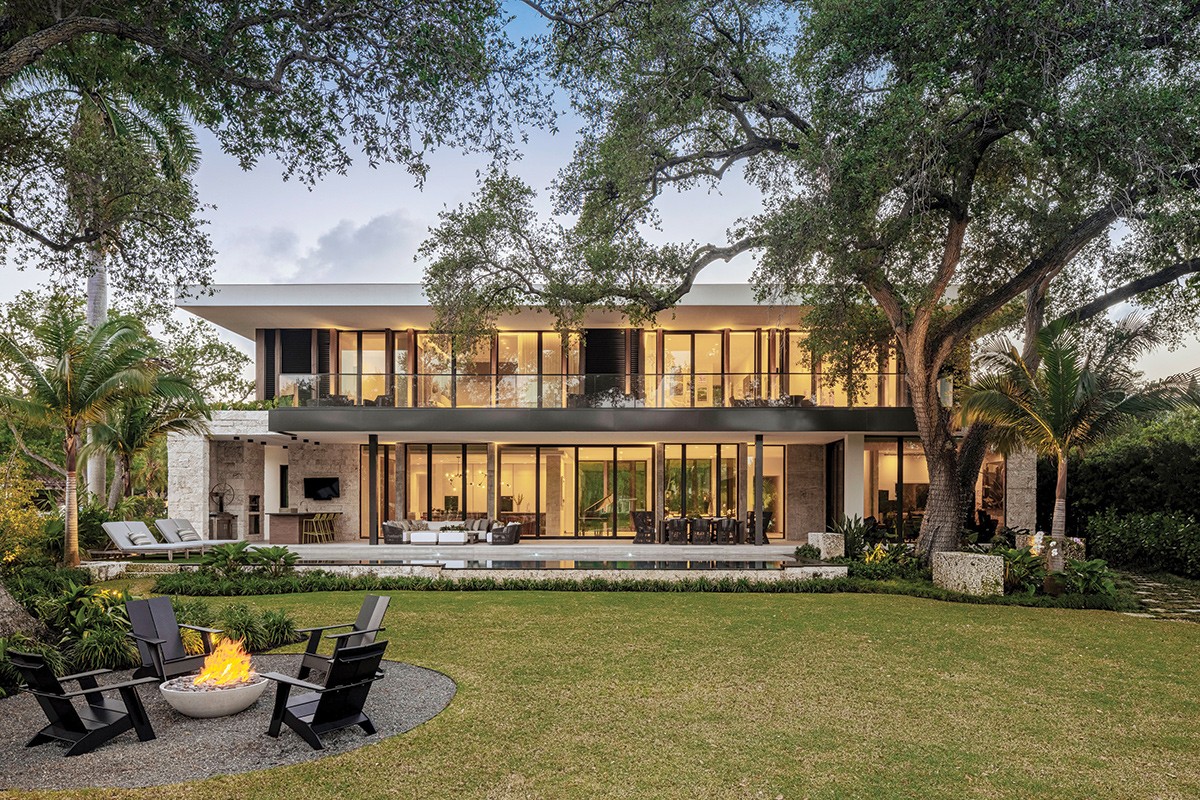 The 9,000-sq.ft. Tarpon Bend Residence uses courtyards and other design features to work with the climate and site. 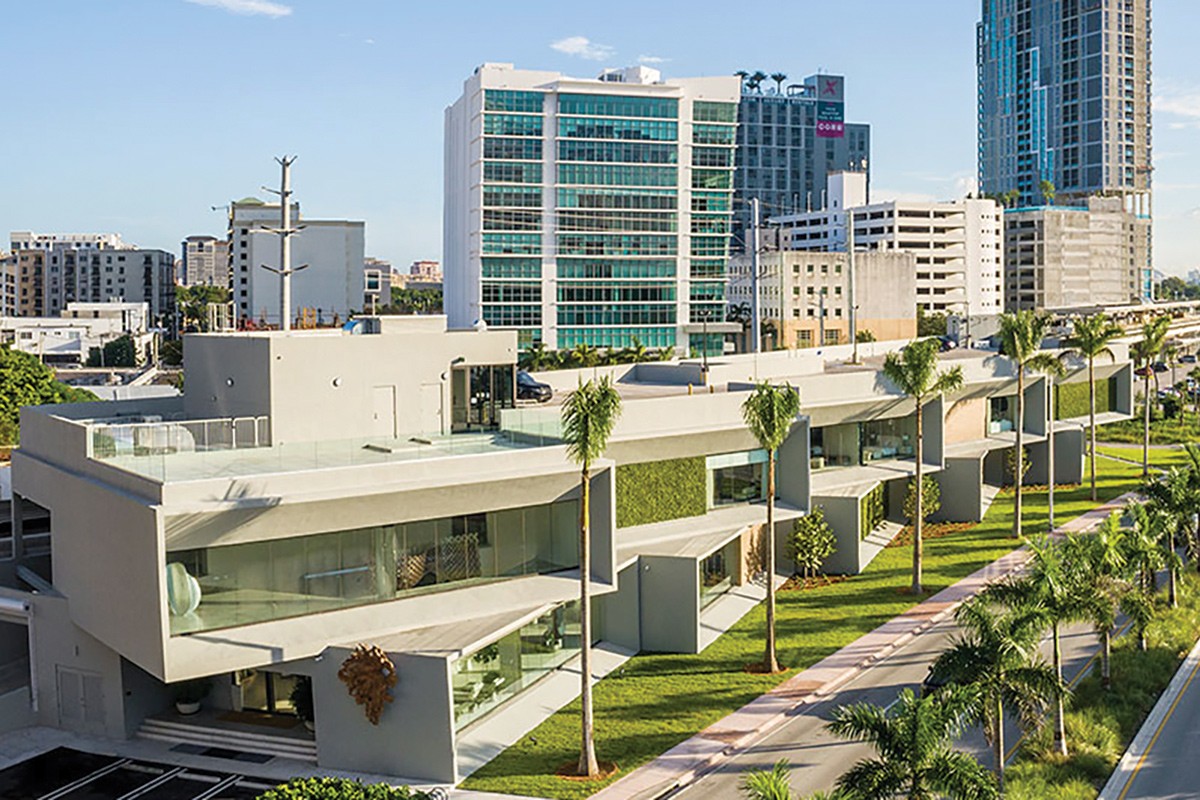 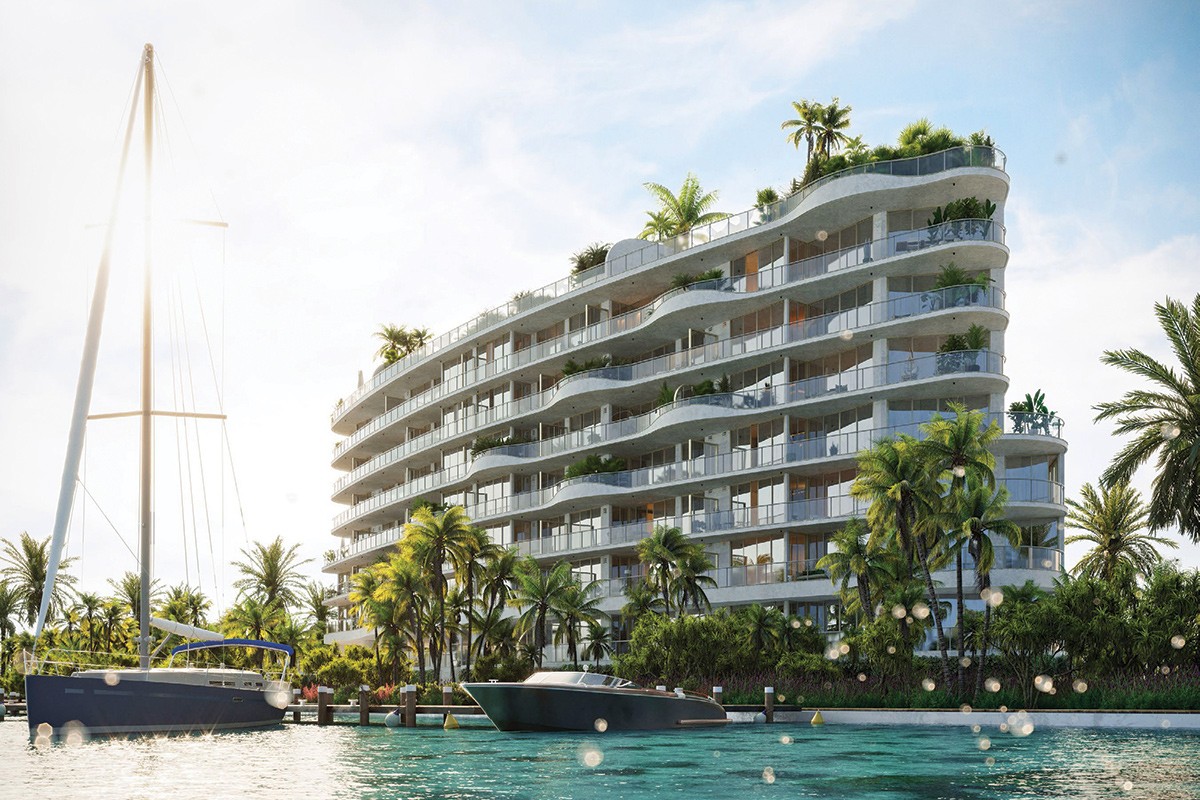 Onda — the Italian word for wave — has been architecturally designed by Bernardo Fort-Brescia of Arquitectonica. 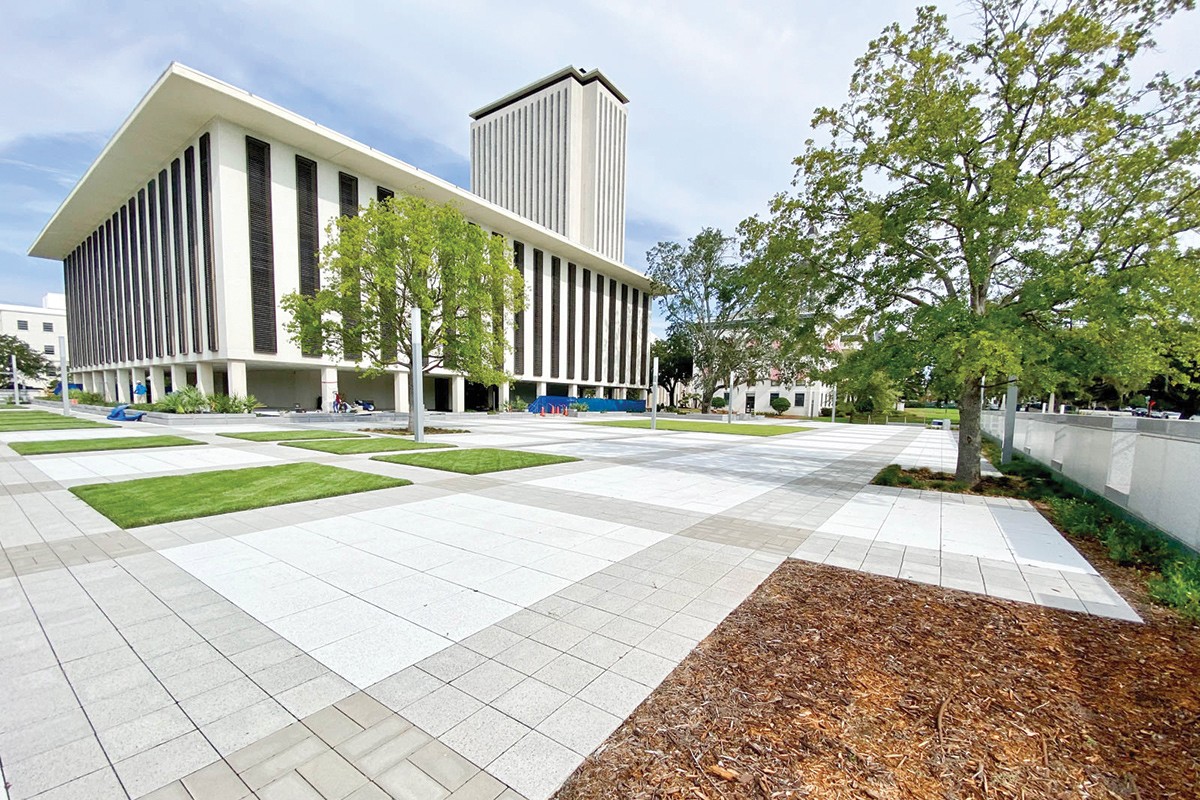 Capitol Memorial Park was approved by the Florida Legislature to house future monuments and memorials. 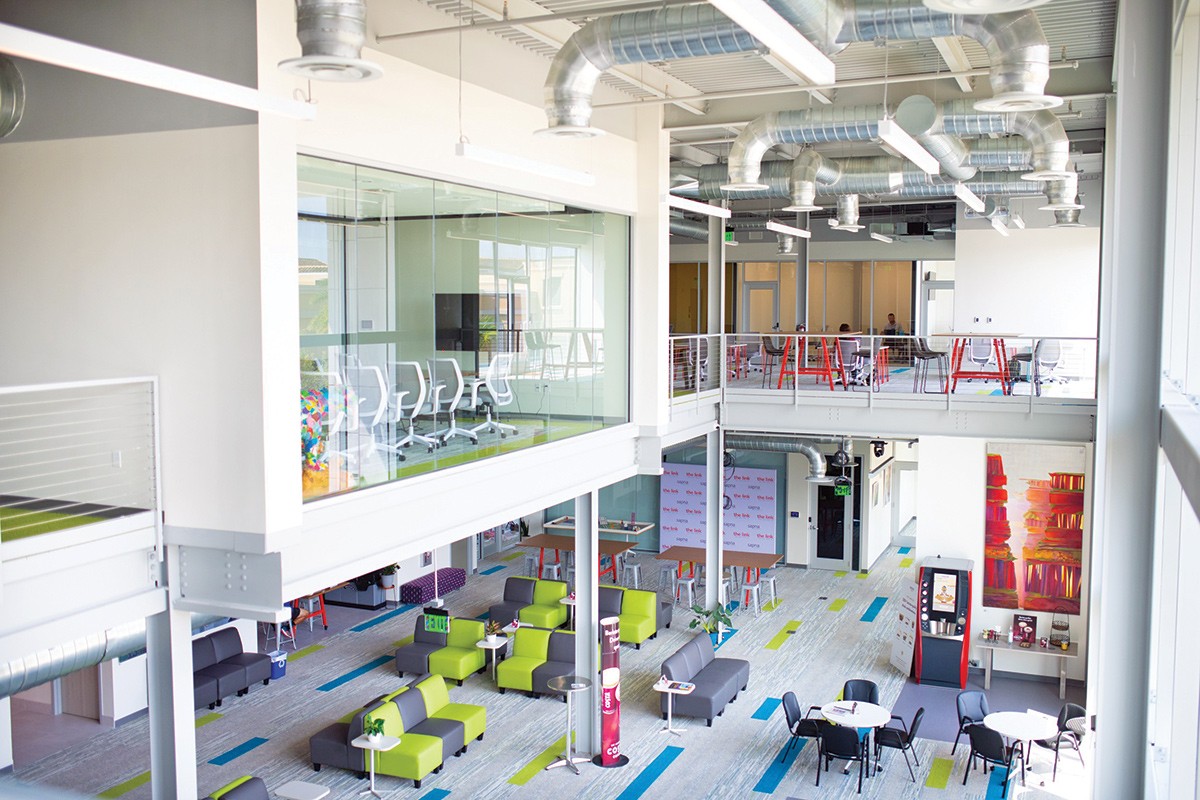 Large windows take advantage of the multi-purpose building's location next to a park. 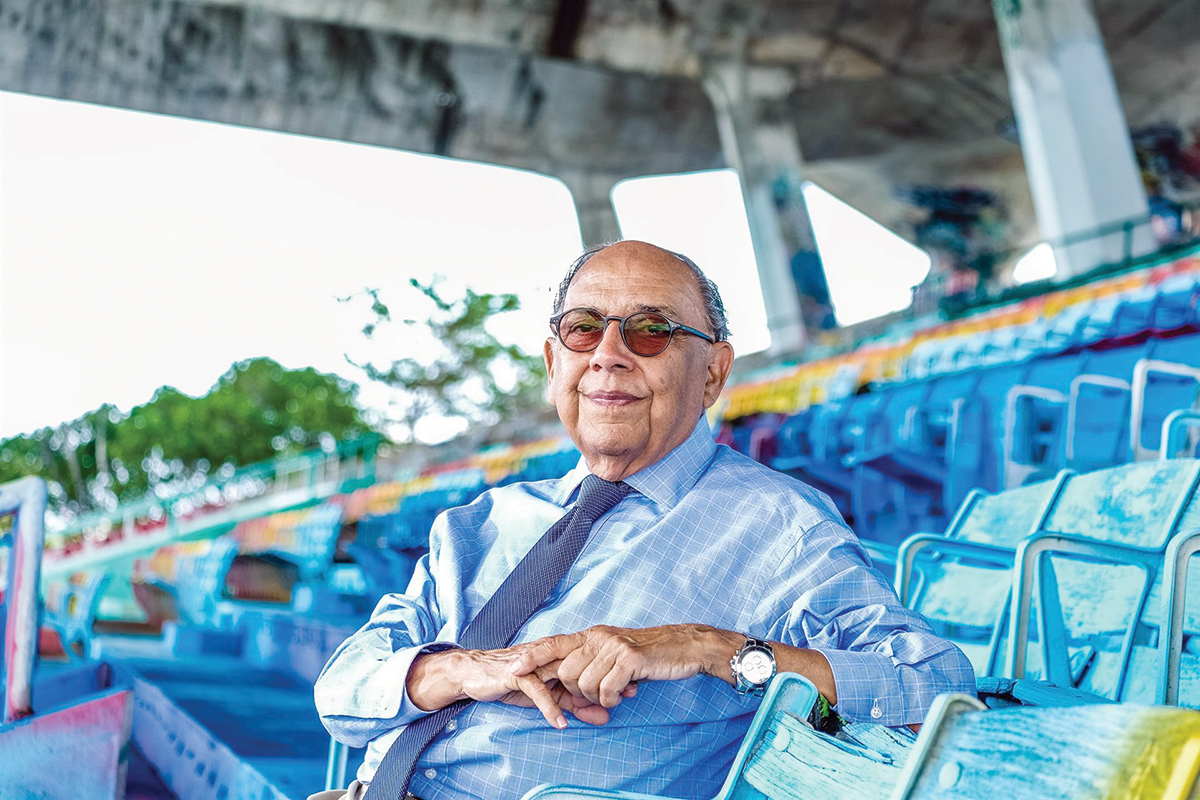 Hilario Candela, one of Miami's most respected and prolific architects, died of COVID at age 87 on Jan. 18. 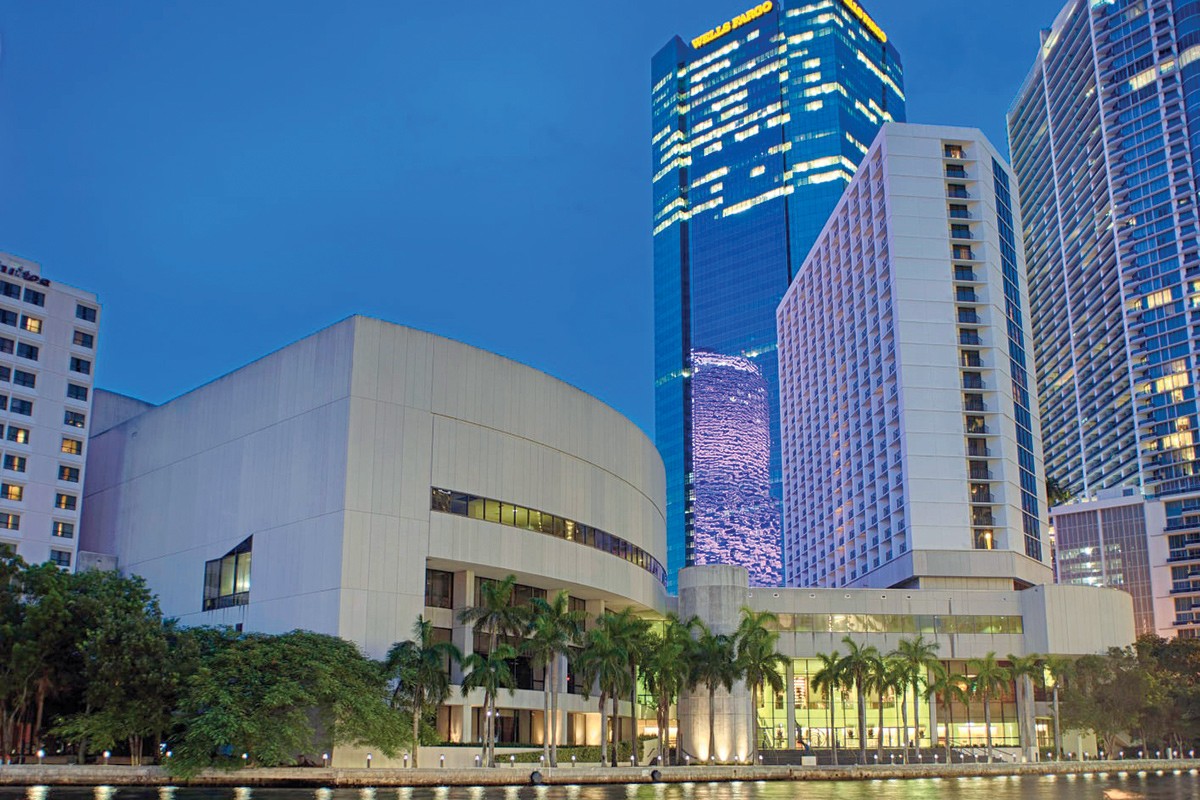 Hilario Candela oversaw the design of the James L. Knight Center and the adjoining Hyatt Regency.

Cutting edge profiles of Florida architecture from around the state

Winter Park unveiled its $42-million library and event center complex in December. David Adjaye — the Ghanian-British architect who designed the Smithsonian’s National Museum of African American History and Culture — led the design team in creating what he calls a “21st century prototype of a multi-purpose knowledge campus.” The 23-acre complex includes the two-story library, an events center with an auditorium and roof terrace and a portico to welcome visitors. All three structures are made of rose-tinted concrete and sit at elevations that provide views of Lake Mendsen, while sweeping windows draw natural light into the interior. — By Amy Keller

The Edyth Bush Charitable Foundation’s new building — dubbed The Edyth after the organization’s late philanthropic founder — will be completed this spring, providing a sleek, modern headquarters for the 50-year-old foundation as well as incubation and collaboration spaces for the local community.

The 16,934-sq.-ft., three-story building, featuring a glass facade and a two-story atrium, was designed to resemble a theater. A passionate supporter of the arts, Edyth Bush was an actress, dancer and playwright, and the foundation likewise has been a longstanding supporter for the arts community.

“The building’s form and materiality reflect the wings of a performance stage in the open position to reveal the variety of activities within,” says Ekta Prakash Desai, partner at SchenkelShultz Architecture and architect of record for the project. — By Amy Keller

The Heron, a 420-unit apartment building that opened last year in Tampa’s Water Street development, features wildly angled balconies and perforated metal screens that capture light and brighten the building’s facade. The building won the top design award in 2021 from AIA Tampa Bay, a chapter of the American Institute of Architects. The contest’s jury wrote: “We loved the simple materials, pure in their expression. The treatment of the concrete adds a nice warmth, and the angles in the balconies that get progressively more pronounced as they rise up the building are a fun way to add interest to the facade.” — By Art Levy

Built in 1910, the J.C. Newman Cigar Factory is the last of Ybor City’s historic cigar factories that still functions as a cigar factory. The red brick building, topped with a landmark clock tower, has undergone a major renovation, modernizing its manufacturing and shipping operations, as well as reconceiving its lobby and office space, while still maintaining the structure’s historic integrity. The building, included in the Ybor City National Historic Landmark District, also has new event space, retail space and a revamped area where cigars are rolled by hand, just as they were in the early 1900s. The renovation was overseen by Rowe Architects of Tampa. — By Art Levy

Solstice Planning and Architecture of Sarasota oversaw another notable renovation of a historic Tampa Bay structure last year, this one the 84-year-old Sarasota Municipal Auditorium off North Tamiami Trail. The Art Deco building underwent various upgrades and repairs, including the installation of custom-fabricated, historically accurate windows offering views of the nearby Van Wezel Performing Arts Center and Sarasota Bay. — By Art Levy

The Streamsong Black Golf Clubhouse, with its floor-to-ceiling windows and fire-treated wood accents, was conceived as both a building to see from the outside — and a building to stand inside and take in the panoramic views of the Streamsong Resort’s contoured terrain. The golf resort, developed by the Mosaic Co., is located on 16,000 acres of one-time phosphate mining land near the Bowling Green community in Polk County. — By Art Levy

Largo’s next city hall is still in its pre-construction phase, but its design from the Tampa-based architecture firm ASD/SKY has already won accolades, including a 2021 sustainability award from the Tampa Bay chapter of the American Institute of Architects. The $55-million, 90,000-sq.-ft. building will have its own solar array, multistory exterior living green walls and space for indoor and outdoor community events. Plans include a 360-space parking garage and retail space. — By Art Levy

For an acre lot near the meeting of the Tarpon and New rivers in Fort Lauderdale, architect Max Strang and his team designed an award-winning 9,000-sq.-ft. house that uses courtyards and other design features to work with the climate and site. It has a solar array, vertical “fins” to address shading and privacy concerns and a footprint that accommodated a grove of “gnarly oak trees.” Strang says the design advanced ideas Modernist architects such as Paul Rudolph and Alfred Browning Parker explored in Florida 60 years ago. The firm was responsible for not only the house’s design and landscaping but also for the interior decor. The house won a 2021 AIA Florida Award of Excellence for New Work. — By Mike Vogel

Palm Beach Gardens-based Birse/Thomas Architects found a way to make an “urban phoenix” take flight in a 1955 building in downtown West Palm Beach that had been “stuck in a constant cycle of dilapidation.” Keeping the structural shell, the firm reorganized the interior into spaces ranging from multi-use rooms that can hold 100 people to small meeting rooms and gathering areas. A new storefront glass facade on the east brought in natural light and blurred the barrier between exterior and interior — giving both pedestrians and occupants something to look at. “Overall, the essence of preserving and showing off some of the original elements and structural systems is a way to shine light on the mysterious past of this old building and pay homage to its recovery back into the emerging urban fabric of the neighborhood,” the firm says. It won an AIA Palm Beach chapter Merit Award. — By Mike Vogel

The family-owned, Brazilian furnishings company Artefacto recently opened its 40,000-sq.-ft. flagship showroom in Miami’s Coral Gables neighborhood. Built by Miami-based Origin Construction, the building was designed by Domo Architecture + Design, with the interior by Patricia Anastassiadis of Sao Paolo, Brazil. The building’s boxy exterior is a nod to the modern design that continues inside to the front lounge featuring a giant, undulating digital waterfall on the wall and a rectangular fireplace.

Fort-Brescia, Arquitectonica Ugo Colombo of CMC Group and Valerio Morabito of Morabito Properties recently launched sales for a 41-unit luxury condominium in Miami’s Bay Harbor Islands neighborhood. Onda — the Italian word for wave — has been architecturally designed by Bernardo Fort-Brescia of Arquitectonica, with interiors by Italian designers Carlo and Paolo Colombo of A++ Human Sustainable Architecture. The eight-story waterfront condo is slated to be completed next year.

The 66-story Aston Martin Residences, at 300 Biscayne Boulevard Way, topped off in December and is set to open later this year. With a facade inspired by a sail in the wind, the luxury tower will offer sweeping views of Biscayne Bay and the Miami River. The architect is Rodolfo Miani of the Argentine firm BMA Architects. The building is being developed by G&G Business Developments and Aston Martin’s design team is collaborating on the interiors. — By Nancy Dahlberg

The Link is a modern, 22,500-sq.-ft., two-story multipurpose facility that provides a space for families to “think, play, learn and do.” Conceived by tech entrepreneur Raghu Misra, the membership-based facility is the first of its kind in Northeast Florida.

Located in the Nocatee Town Center, the building features large windows to take advantage of its location adjacent to a park. Inside, the rooms are modern, industrial chic with splashes of color that punctuate the cool gray carpeting and mostly black furniture.

On the first floor, six studios provide space for yoga, dance and martial arts classes, among others. Meeting and event space is also available on the first floor, including a Flagler Health+-sponsored 360-degree immersion studio. The walls of the studio form a 360-degree screen, providing an immersive virtual reality experience using videos from around the world. “Today, you want to do yoga in Barbados, so be it,” Misra says. “Tomorrow, you may want to go to Hawaii.”

The second floor has meeting rooms and co-working space for startups, small businesses and remote workers.

The Link takes advantage of sensors and other technology to reduce the building’s CO2 emissions from lighting by more than 70%, and the structure’s total energy usage is 35% less than a similar-sized building.

“Our power bill for lights is less than $4 a day, so it costs less than a coffee from Starbucks to run the lights for the entire building,” Misra says.

Through sensors, the building learns the habits of its users and creates a personalized experience for everyone who enters. For instance, the building knows which office is Misra’s, the room temperature he prefers and how much light he likes. When Misra enters the building, the systems adjust to create his preferred environment. — By Laura Hampton

The Legislature approved the park to house future monuments and memorials. Hoy + Stark architects in Tallahassee created a flexible design and layout of the park — part of an $83-million Capitol Complex improvement project — to accommodate a variety of existing and future memorials and monuments created by commissioned artists and sculptors. “The Memorial Park has been an opportunity to transform the existing Capitol grounds into a public space for its numerous visitors,” says architect Monty Stark. — By Carlton Proctor

The center’s design has won the American Institute of Architects’ Honor Award for New Work. — By Carlton Proctor

A flexible interior design provides a light-filled environment with low maintenance and operational costs. Among the K-5 school’s features are a media center, labs and courtyards for outdoor learning. The $40-million school also was designed to project a strong, exterior “civic presence” enhanced by architectural features that include elevated towers and cupolas.

The design earned the AIA Citation Award of Excellence for New Work. “The design works well with its environment, bringing the outdoors into the school’s classrooms and common places in a way that engages the student population,” AIA judges said. — By Carlton Proctor

One of Miami’s most respected and prolific architects, Hilario Candela, died of COVID at age 87 on Jan.18. Early in his career, the Havana-born exile designed the 1963 Miami Marine Stadium, widely considered a masterwork of modern design and engineering, and Miami Dade College’s first two campuses, North and Kendall. For 30 years, he co-led his architecture firm Spillis Candela and Partners, overseeing numerous projects such as the Metromover, the James L. Knight Center and the adjoining Hyatt Regency hotel, before selling the firm and retiring in the mid-2000s. In later years, Candela consulted on the decadelong marine stadium restoration project but did not live to see it break ground.