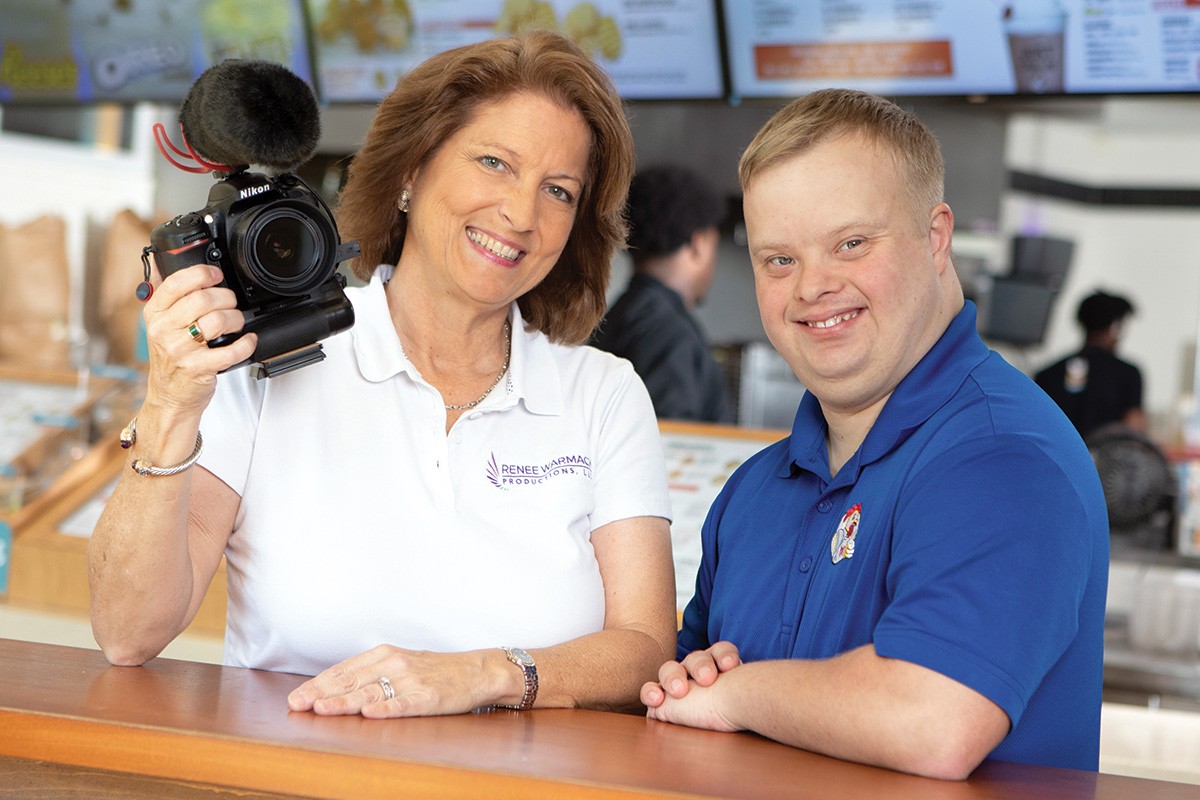 Tampa filmmaker Renee Warmack was so inspired by Piazza that she decided to make a documentary about his journey. 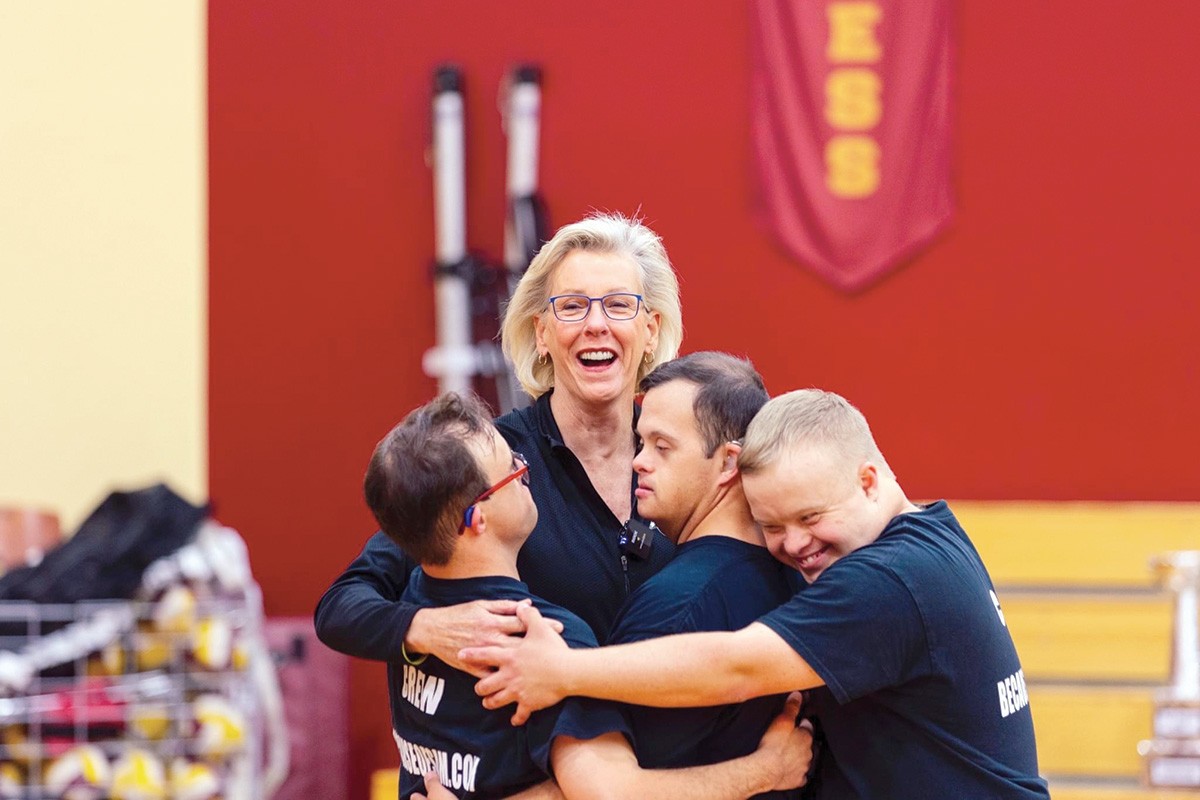 There’s a mutual admiration between Piazza and Tampa Mayor Jane Castor, who recently appeared in a music video with Piazza and his friends celebrating Tampa’s inclusive, sports-loving community.

How the documentary 'Because of Sam' changed workplace inclusiveness

Sam Piazza is an employer’s dream. He works hard. He’s friendly. And he’s improved the environment at the restaurant where he works. Now, a documentary about his life has inspired a new training program for Florida workplaces.

Sam Piazza loves to socialize, even during work. He wipes down tables and empties the trash while greeting the regulars at a PDQ restaurant in Tampa, chatting them up.

The restaurant managers who work with him say he has made a real difference in their business environment. They refer to him as their image and brand ambassador. It doesn’t matter that Piazza has Down syndrome. He’s never let it hold him back or stifle his spirit. He was homecoming king at his high school, a manager for the basketball team and member of the ROTC and was an ambassador for the school’s Best Buddies program.

Tampa filmmaker Renee Warmack was so inspired by Piazza that she decided to make a documentary about his journey. She filmed Piazza during his school years and as he grew into an adult in the working world. In 2019, the 50-minute film Because of Sam opened audiences’ eyes to the challenges of people with developmental disabilities who want to work and gain a measure of independence in a world that’s often at a loss for how to treat them.

“You could tell by looking at people in the theater and listening to them that it moved them,” Warmack says. “It was so validating. In 50 minutes, you get to see a snapshot of someone who has overcome barriers and how leadership at home, work and school helped set the stage and set the bar high for the culture that needs to be in place for someone like Sam to succeed.”

Since the movie’s release, Warmack and Piazza, now 32, have turned Because of Sam into a training program for organizations that interact with customers with disabilities and who want to make their workplaces more inclusive. “If yours is a more caring and empathetic environment to work in, you have more satisfaction and organizational efficiency,” Warmack says.

Julianne Holt, the public defender for the 13th Judicial Circuit understands that hiring individuals with unique abilities can enhance not only an office’s diversity but expand the conversation about how much value people can bring to the table.

Nick Altieri, one of Piazza’s best friends who also has Down syndrome, has worked in Holt’s office for 10 years. Holt also employs several others with disabilities.

She said she was inspired by Warmack’s documentary and welcomed Warmack to facilitate discussions in her office on diversity, cultural differences and inclusivity. “She is very good at expanding the discussion past the message of the movie.”

Warmack trained 118 attorneys and legal support staff in Holt’s office alone, with the employees providing feedback that the film and program would help them better relate to people who have disabilities and be more inclined to include people with disabilities in their work activities.

“It is a more meaningful way than just sitting in a room to do a one-hour training,” Holt says. “It really enhances awareness and has people doing self-reflection.”

Warmack has received approval from the Florida Bar Association to offer her training as continuing legal education for attorneys. In addition, she includes what actions businesses can take to better accommodate people with disabilities in her facilitator’s guide.

Hillsborough County Clerk of Court and Comptroller Cindy Stuart recently invited Warmack to deliver a training session for dozens of employees to help enhance the office’s ability to deliver services for people with disabilities and help them navigate local government services, adding “our mission is to meet our constituents where they are.”

“Sam Piazza’s message of love and acceptance is an inspiration,” Stuart says. “We are more alike than we are different.”

Warmack also is reaching out to schools.

Kelley Parris, executive director of the Children’s Board of Hillsborough County, says it is imperative for children to get this type of training to realize they can learn from everyone they encounter.

“To have true inclusion, it has to be a relationship, and that develops through documentaries like Because of Sam,” Parris says. “It creates tolerance in children, respect for others and helps children to accept differences.”

Piazza says he believes the documentary alone has already made a difference in raising awareness about people with disabilities.

“After my friend Casey saw it, he went and got a job at the PDQ in Brandon. And a couple people were saying stuff to me like, ‘Sam, you inspired my son or daughter to follow and find a job and have long-lasting friendships.’ It was like the best day in the whole entire world.”

Piazza has been helping to build understanding since a young age, serving as the United Way poster child at age 4. He’s been a longtime volunteer at the non-profit Gigi’s House in Tampa, which offers tutoring, speech therapy, fitness programs and life skills classes for people with Down syndrome. There’s a mutual admiration between Piazza and wrestling superstar Thaddeus Bullard, the Tampa resident known worldwide as Titus O’Neil, as well as Tampa Mayor Jane Castor, who recently appeared in a music video with Piazza and his friends celebrating Tampa’s inclusive, sports-loving community. “He works the entire room like a pro,” introducing himself and striking up conversations, Warmack says. But the positive impact goes two ways. “The best part of my job are the people,” Piazza says. “They give me energy, make me full of life.”

John Piazza, Sam’s father, says he believes Warmack’s training is already making an impact. “It is broadening the awareness of how to interact with people with a disability. As far as the businesses, I see more and more like PDQ that hire more people with disabilities. As one company hires and puts in place a program, another company will see it and realize it can happen. Hopefully, these are some building blocks.”