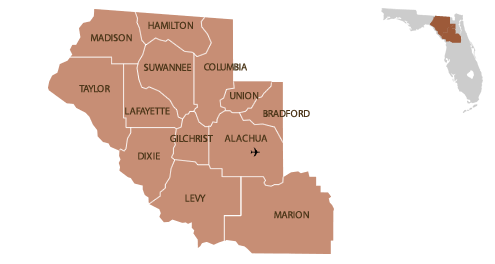 What comes to mind when you picture the perfect place to live in Florida? We’re betting that your ideal destination has one or more of these: sandy beaches, ocean views, moderate temperatures, perhaps a theme park within reasonable proximity. Now add a world-class university to this list and you’ve put yourself in Florida’s North Central region, where many who first came here as college students have stayed to raise families, join existing firms and/or launch new ones. Adding to this region’s appeal: ready access. Companies with customers and suppliers spread far and wide will find seamless road and rail connections here along with easy links to two of Florida’s busiest deep-water ports.

North Central is home to the University of Florida — the nation’s 5th ranked public university — where innovations created in its classrooms and laboratories become products that can be licensed and commercialized quicker than at almost any other university nationwide. According to the think tank Heartland Forward, only Pittsburgh’s Carnegie Mellon University beats UF for turning knowledge into market power, a process otherwise known as technology transfer.

In 2022, for the first time ever according to the National Science Foundation, University of Florida surpassed $1 billion in research spending, almost half of which took place in the six colleges of UF Health. Leading the way was the College of Medicine in Gainesville and Jacksonville at $347 million with another $120.2 million generated by the Colleges of Public Health and Health Professions, Veterinary Medicine, Pharmacy, Dentistry and Nursing combined. And further adding to the pot: $278 million from UF’s Institute of Food and Agricultural Sciences and another $131.8 million from the Herbert Wertheim College of Engineering.

Approximately $469 million of total research conducted at UF in 2021-22 was funded by federal agencies, including the National Institutes of Health, the National Science Foundation, the U.S. Department of Agriculture, the Department of Energy and NASA. Another $171.7 million came from the state of Florida.

With its record $1.076 billion in research expenditures, UF joins an exclusive group of some 15 public universities across the country, including the University of Michigan, UCLA and the University of North Carolina, Chapel Hill, to surpass the $1 billion mark. And helping innovators move their discoveries from conception to commercialization are two UF-supported incubators — The Hub in downtown Gainesville and Sid Martin Biotech in nearby Alachua.

• The 84,000-sq.-ft. Herbert Wertheim Laboratory for Engineering Excellence opened in October 2021, and nearby, at the 263,000-sq.-ft. Malachowsky Hall for Data Science & Information Technology, construction continues with a projected opening in April 2023.

• In November 2021, the University of Florida and California-based Scripps Research signed an agreement to welcome the Florida branch of Scripps into the research arm of UF’s academic health center with the aim of accelerating the translation of basic scientific discoveries into clinical advances to benefit human health. Potential areas of study include cancer, immunology and infectious disease, neuroscience, HIV/AIDS, structural biology and molecular medicine.

• Construction is underway at The Convergence, a 420-acre mixed-use development near the Sid Martin Biotech incubator in Alachua combining single-family homes, commercial space and a technology hub. Anchored by Momentum Labs and adjacent to Progress Park, the development’s goal is to create a collaborative atmosphere where high-tech innovation thrives alongside a vibrant residential community.