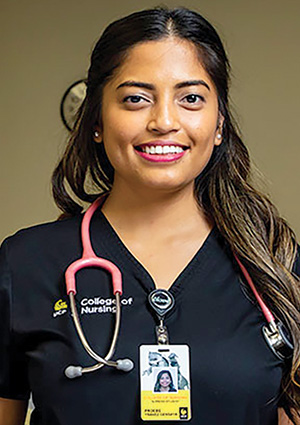 Second-degree nursing programs are helping to fill a need.

While nursing wasn’t her first career, Proebe Ybanez always felt a pull toward the profession. As a teenager growing up in the Philippines, she recalls feeling helpless as she watched her great-aunt suffer a massive seizure. Years later, when she was teaching chemistry in Arizona, she says she noticed promising students going missing for days or weeks at a time, only to learn they were at home taking care of sick relatives or dealing with their own illnesses. “That was the turning point for me,” she says. “Teaching is great; teaching is wonderful. It gives me so much pride and joy, but I felt like in that moment, health care is where I need to be.”

Ybanez, 28, took the fast track to becoming a nurse — landing a spot in the University of Central Florida’s accelerated nursing program and earning her bachelor’s of science degree in nursing (BSN) in just four semesters (about a year). UCF’s second-degree nursing program has been in place for nearly 20 years, but programs like it (there are 11 in Florida) have become a key tool to shore up the RN pipeline amid a nationwide nursing shortage.

Ybanez, who graduated last summer, has accepted a position at AdventHealth in Orlando and will start her nurse residency there in October, working in a vascular unit. Looking ahead, she hopes to continue her education and eventually become a family nurse practitioner. “I would really love to go back into the community I was raised in and help underserved populations, so I want to become a family health practitioner and do some global health nursing in the future,” Ybanez says.

Last year, Jacksonville University’s Keigwin School of Nursing teamed up with Baptist Health to launch a 12-month, second-degree program for nursing students who already have bachelor’s degrees. The school also offers a 16-month program for students with prior four-year degrees.

AdventHealth University, a private, faith-based university focused on health care with campuses in Orlando and Denver, has replaced its four-year curriculum for a BSN nursing degree with a three-year curriculum, beginning this fall. The restructured program targets high school graduates, college transfer students and mid-career professionals and aims to get new nurses into practice faster.

The Arizona College of Nursing, a Phoenix-headquartered private school that has campuses in Tampa and Sarasota, also is offering an accelerated program through which students can earn their BSN in three years or less.