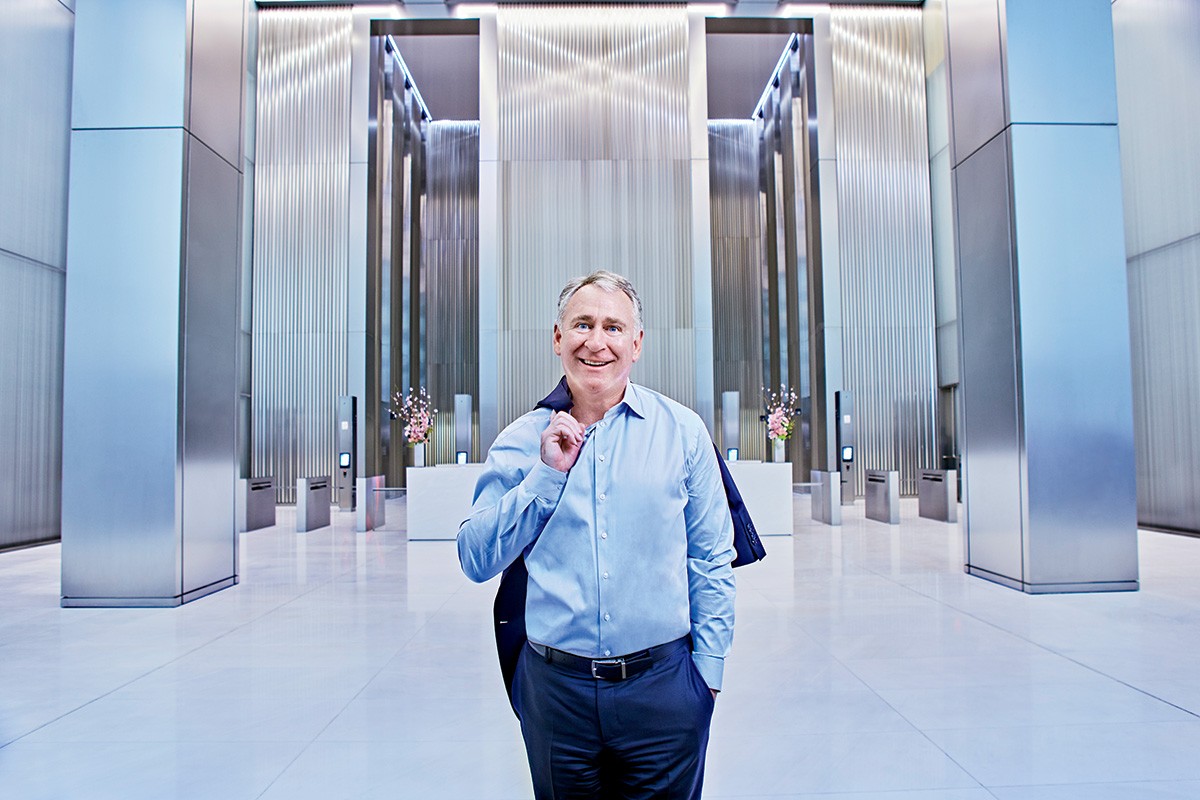 The Boca boy who made good — becoming Illinois’ richest person — announced in 2022 he was moving his family and the firms’ headquarters to Miami, where he became Florida’s richest person. 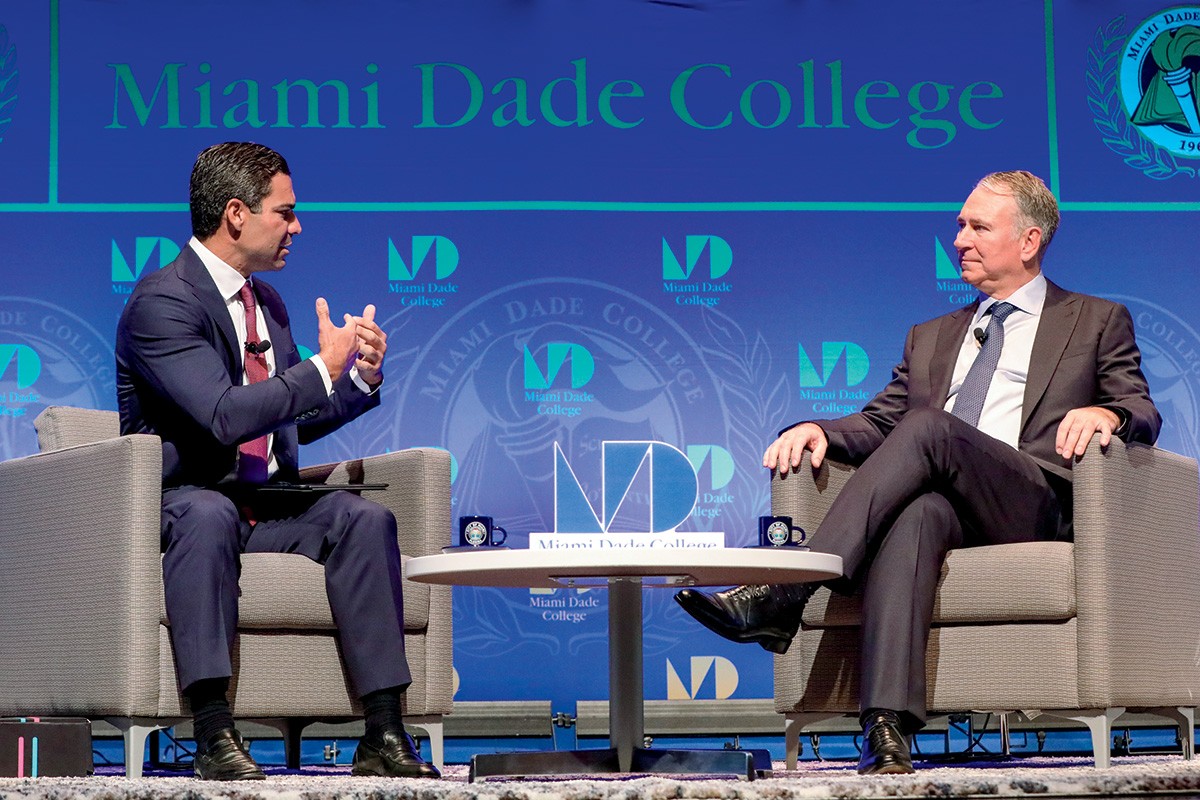 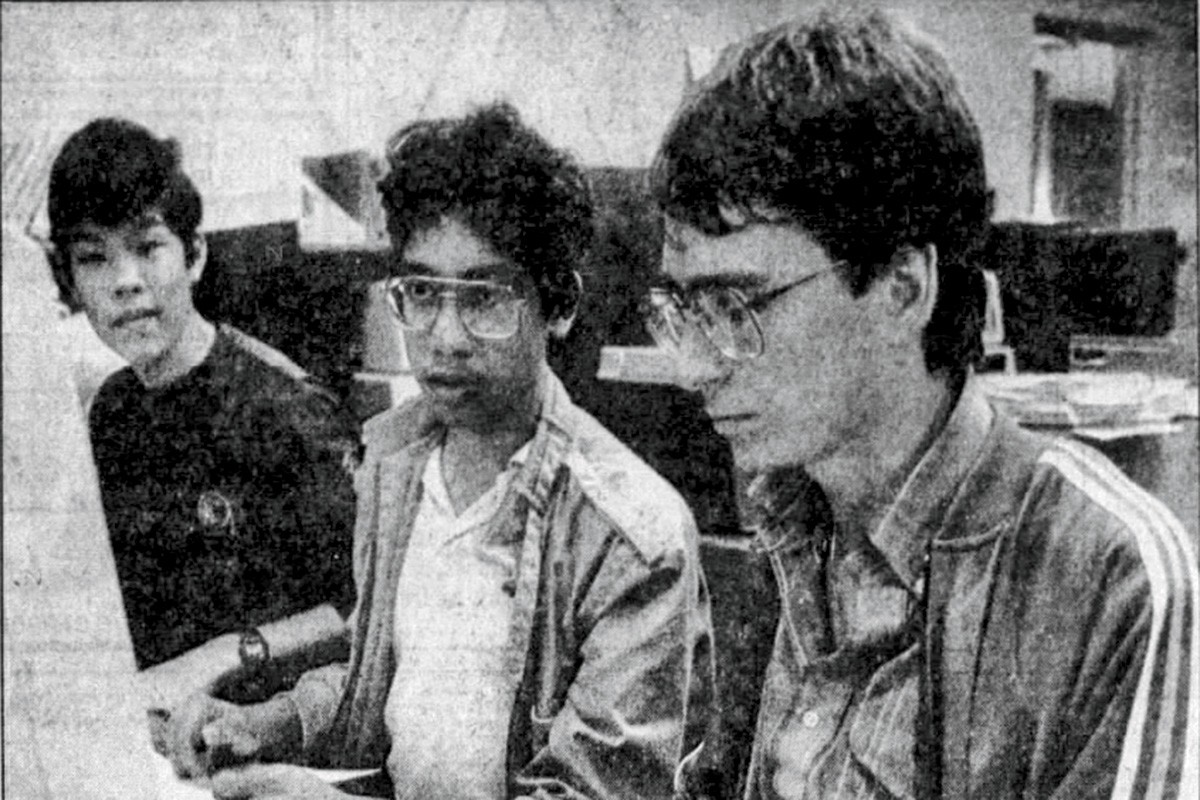 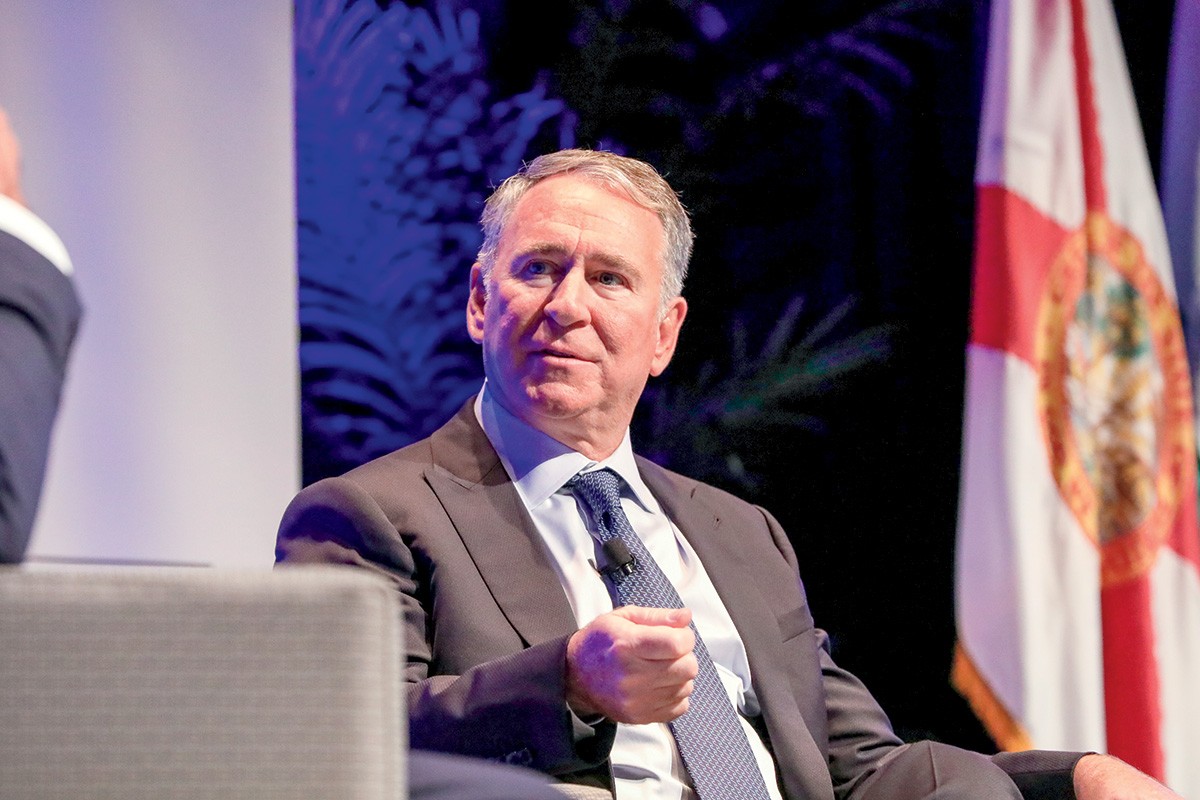 "In the United States, there's just a tremendous sense from most of my peers in the commercial realm. We're going to run our business to be successful; we're going to develop our talent; we're going t hope they have great careers with us. And if they leave us, they continue to be prosperous in their lives, and we're going to give to our communities. We're going to make a difference in where we live." 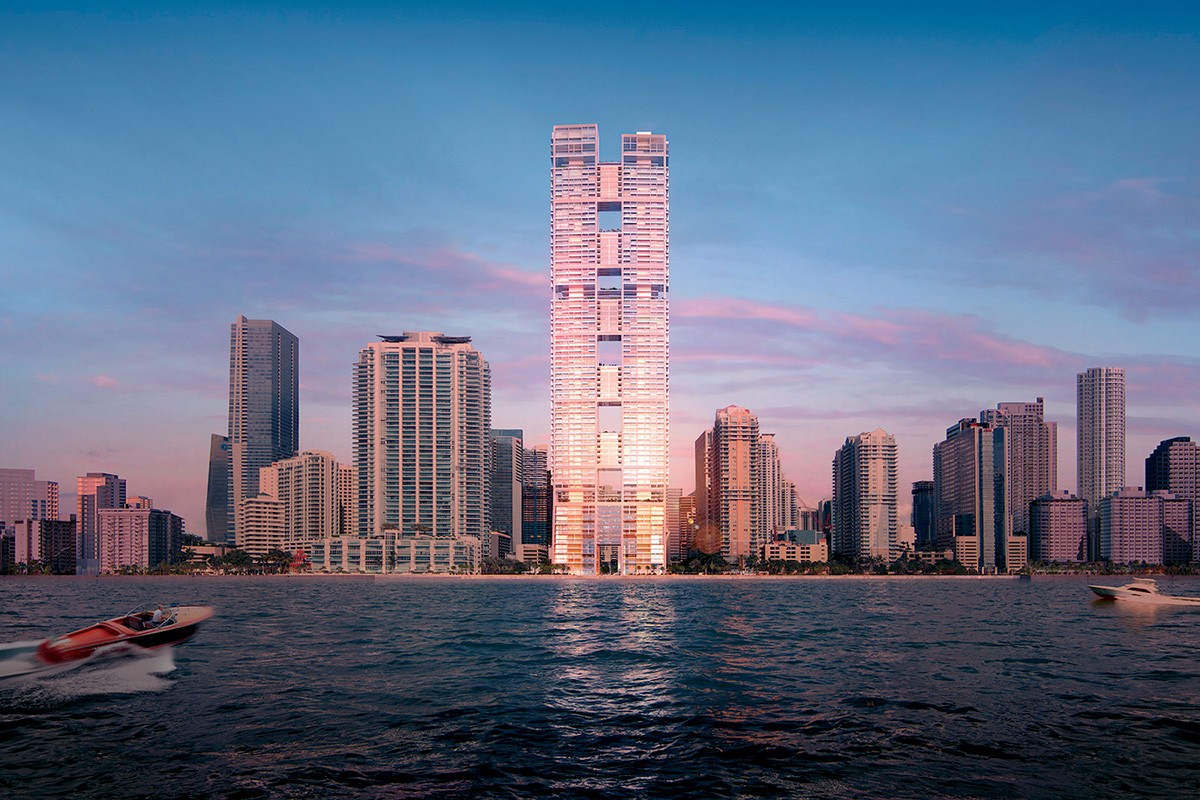 A 2.5-acre site on Biscayne Bay will be home to a headquarters for Griffin. He paid $363 million for land.

Hedge fund manager Ken Griffin is building a multi-billion-dollar corporate and private empire in South Florida — and it's having commercial, political and philanthropic implications in the region and beyond.

In the 1986 photograph in the local newspaper, teenager Ken Griffin sits closest to the camera, typing away on a keyboard. The “lanky bespectacled youth,” as the accompanying article described him, belonged to Boca Raton Community High School’s “crack computer team.” Being on Boca’s computer team carried a particular local status: The IBM personal computer was born just five years earlier at the company’s massive Boca Raton campus.

The Sun Sentinel article called Griffin and his teammates “perennial honor roll students and math hotshots.” Griffin was president of the math club. He also had his own one-person, fledgling mail-order company, selling education software — some of which he created.

But Griffin told the reporter that computers wouldn’t be his life’s work. He predicted the job market for programmers would contract in the next decade. He wanted to be a businessman or lawyer because both were people-oriented.

“He was an awesome kid,” says Becky Cray, a retired Boca High teacher who led the computer department when Griffin was on the team. “He was always willing to help the kids. A great business sense. Great leadership skills. An all-around great kid. I knew he was going to be something special, but I never knew he was going to be a multi-billionaire.”

A year after the article was published, Griffin was a student at Harvard University, where despite a ban on students running businesses from campus, he put a satellite dish on the roof of his dorm so he could get real-time stock quotes. By 1990, he had co-founded Citadel, a hedge fund that today has $57 billion in assets. He eventually based the company in Chicago along with Citadel Securities, a second firm he founded in 2002, that has become a market-making company handling one in every five trades in the United States.

Jump forward to 2022: The Boca boy who made good — becoming Illinois’ richest person — announced in 2022 he was moving his family and the firms’ headquarters to Miami, where he became Florida’s richest person. Many billionaires have a first or second home here, but Griffin differed in that his move also brings scores of Citadel employees with him, creating their own wave of economic impact on South Florida. Griffin has become one of the private sector’s most prominent proselytizers for relocating to Florida. Few things carry the imprimatur of a man with a $31.5-billion net worth voting with his feet in favor of Florida.

That was evident in November, when Griffin appeared as the headliner at a sold-out Economic Club of Miami event alongside Miami Mayor Francis Suarez, still relishing the considerable prize the city has landed: “I can’t tell you the number of places that I go around the world where people say, ‘I cannot believe Citadel is in Miami,’ ’’ Suarez told the audience. “You could have chosen anywhere in the world. You chose to be here. We’re incredibly grateful.”

Griffin’s Florida story begins when his father, a General Electric engineer, and mother relocated to Florida to work in the space program. Griffin was born in Daytona Beach in 1968. His family connection to the space program remains an inspirational touchpoint for Griffin, telling the Miami audience that the Apollo moon landings were some “of the greatest moments in the history of humanity” that proved “we can do anything as a country.”

When Apollo wound down, the family relocated to Wisconsin, then back to Florida when Griffin’s father went into management at a concrete tile company. Griffin attended middle and high school in Boca Raton. He played soccer, including against a number of Miami schools — “often a pretty humbling experience” he told the Miami crowd. He was active in clubs and appeared in the local press several times.

Then came Harvard. His wealthy grandmother (a formidable Illinois businesswoman in her own right whom Griffin gives much credit for his success) “was my scholarship program to Harvard.” Griffin later donated $150 million to Harvard to fund need-based scholarships; at the time it was the largest gift to the university in its history. (Griffin is estimated to have given more than $1.5 billion to philanthropic causes.)

For approximately 30 years, Griffin based Citadel in Chicago, where he grew it and his profile. He donated $600 million in the city, battled with fellow billionaire Democratic Gov. J.B. Pritzker, especially over Pritzker’s handling of Illinois crime, and was a major donor to Republican candidates. He chaffed at what he calls “woke ideology” in the Chicago schools, citing an incident when his son was reprimanded for telling an Asian student that the student was good at math, a comment the teacher considered stereotyping, and concerns that American history lessons left out the role the U.S. has played in advancing the concepts of freedom and individual rights at home and abroad.

A self-described centrist, Griffin also worked closely with Chicago Mayor Rahm Emanuel on crime solutions and education. In 2018, Griffin donated $10 million to the University of Chicago Crime Lab for what was called a transformative initiative to use data analysis, community input and tech to make Chicago safer. “No child, anywhere, should be afraid to walk to school or play outside. A safer Chicago attracts more families and better jobs and provides a better quality of life for all,” Griffin advocated at the time.