Scientists have discovered a way to alter the chemical properties of fentanyl, offering a safer alternative to the powerful pain reliever.

Fentanyl is a synthetic opioid similar to morphine but up to 100 times more potent. According to the Centers for Disease Control and Prevention, it is among the most abused pain relievers in the U.S. and the leading cause of overdose deaths. More than 80,000 Americans died from an opioid overdose in 2021.

In a study published in the journal Nature, a team of scientists from the University of Florida, Washington University in St. Louis, the University of Southern California and Stanford University, report how they modified fentanyl’s chemical structure to maintain its pain-relieving properties while reducing harmful side effects.

“Fentanyl is one of the world’s most powerful, yet dangerous pain-relieving medications,” said study co-author Jay McLaughlin, Ph.D., a professor of pharmacodynamics in the UF College of Pharmacy, part of UF Health, the University of Florida’s academic health center. “A team of multidisciplinary scientists from some of the nation’s leading universities came together to gain a new understanding of how the opioid receptor works, and from that research, we sought to generate a new medication that will be a safer pain reliever.”

Pain-killing drugs like fentanyl and morphine bind to the mu-opioid receptor on nerve cells. The interaction triggers a series of responses — from beneficial pain relief to serious side effects like respiratory distress, sedation, addiction and even death.

By applying new insights into the receptor structure, researchers designed a medication that binds to the established site of activity on the outside of the mu-opioid receptor, while also engaging a binding site for sodium ions that exists deep within the receptor. McLaughlin described these receptor sites as switches that turn on and off to control the drug’s effect on the body. Researchers found that when the new drug interacts with both sites on the mu-opioid receptor, it maintains its painkilling effects while reducing harmful side effects. 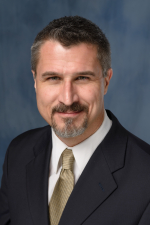 “The newly designed fentanyl medication is engineered to work as a partial agonist, which are drugs that bind to and activate a receptor but only have partial efficacy,” McLaughlin said. “When the drug binds to the mu-opioid receptor site, the interaction triggers pain relief, but the engagement with the sodium ion essentially turns the receptor off before the adverse effects can occur.”

Susruta Majumdar, Ph.D., led a team of scientists at Washington University to design the new fentanyl drug. Other researchers provided computer modeling support and studied it in cell assays before animal studies began at the University of Florida. McLaughlin tested the altered fentanyl drug in mice and found it provided pain relief without causing respiratory depression or other opioid side effects.

“The more we can learn about how opioid receptors work, the closer we get to developing safer pain medicines,” McLaughlin said. “We can expand this research to target other receptors and see if similar results may improve medications for substance abuse, mood disorders and other health conditions.”