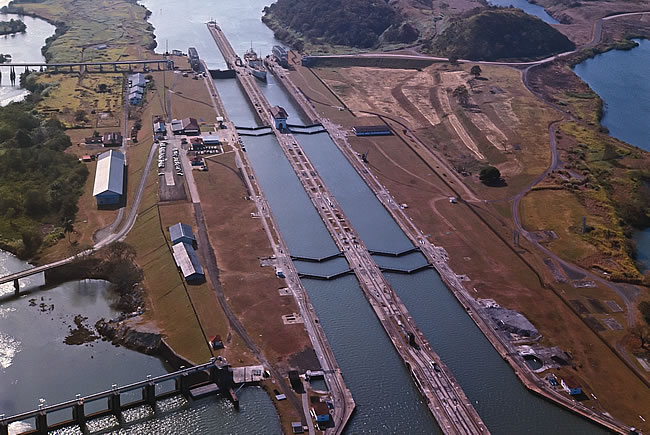 Florida is that rare state with a trade surplus; thanks largely to south Florida, it exports more than it imports. Florida’s 15 deep-water ports plan to spend $2.6 billion over five years deepening their channels, adding cranes, dockside rail and other infrastructure to better position themselves to capture the cargo traffic and the good-paying jobs that trade generates. Part of the building boom is focused on giant ships that will begin transiting a wider Panama Canal in 2015. Other spending aims to capture trickle-down traffic that feeds from those larger ships or that’s displaced by them. The goal: Attracting cargo that now goes through Long Beach, Calif., Savannah, Ga., or other ports.

» Takeaway No. 1
The wider canal isn’t the only logistical factor in determining Florida’s competitive position.

Florida Ports Council President Doug Wheeler points out that Florida is a two-day logistical ride (trains and trucks) to 60% of the U.S. consumer base. That argues in favor of Florida ports, but logistics is a complicated business — cargo ship lines have to analyze how to deploy their fleets; shippers must consider rail and truck rates and balance speed, service and diversification of routes.

Ports must crunch all the numbers to make their case as the best route. “The wider canal is tipping the playing field,” says Paul DeMariano, a consultant and former director of Port Everglades. But “you’ve got to know something more than ‘build it and they will come.’ ”

Ken Roberts, CEO of WorldCity, a Coral Gables company that follows global business, says “shipping lines and logistics companies are pretty agnostic. They want the most efficient and least expensive means to get the goods from beginning to end. It remains to be seen how well the state can do that. There will be all sorts of calculations the shipping lines will have to make.”

» Takeaway No. 2
Miami sees itself as most likely to benefit from an expanded Panama Canal.

When the wider canal opens in 2015, only three ports on the east coast will have the 50-foot channel depth needed to accommodate the new generation of monster ships that can carry 12,500 cargo containers: Norfolk, Va., New York and PortMiami. Gov. Rick Scott, who is very popular in port circles, saw to it that Miami got the funding necessary to deepen its channel.

Within 18 months, PortMiami will have both the deep water and a tunnel connecting the port to the interstate. “Florida’s the center for the hemisphere,” says PortMiami Director Bill Johnson. “Miami will be it. Miami will be at 50 feet. That has raised the conversation. It has raised the bar. ... You’re either in the game or you’re not. Here in Miami, we’re in the game. … Under the leadership of Gov. Rick Scott and the Florida Legislature, Florida has the opportunity to propel itself from the fourth position (in exporting states) to be No. 1 in America.”

» Takeaway No. 3
The Panama Canal isn’t the only high-impact trade factor.

Both JaxPort and Port Everglades plan to get to 50 feet eventually to accommodate the super cargo carriers. That said, “the Panama Canal is — I’m not going to say it’s not a significant project; it is — but whether it’s a game changer is debatable. Is it the game-changing project that people thought it was even five or six years ago? I think not,” says Paul Anderson, CEO of JaxPort. “The Suez Canal will be in my opinion the opportunity to be the game changer for the east coast of the United States.”

Anderson argues that as rising Chinese costs drive manufacturing to Southeast Asia and India, a route through the Suez will be attractive for reaching the east coast. JaxPort already has Suez-transited cargo ships calling weekly that are bigger than anything the Panama Canal can handle until it finishes its widening project in 2015. However, such ships can’t come in fully loaded because there’s not enough depth in the port’s waterway.

» Takeaway No. 4
Other U.S. ports are making improvements, too.

Florida ports will spend big on improvements, but it’s a drop in the bucket globally. After a costly labor strike at Long Beach, Calif., in 2002, shippers have been diversifying the ports they use. But how much of a shift will actually play out? “I’m not sure everybody’s going to get what they expect,” says Port of Tampa senior marketing director Wade Elliott, whose port is joining with Houston and Mobile, Ala., to market themselves as a route for container ships interested in reaching 32% of the U.S. population. “I don’t think there’s a real kind of simple answer that says, ‘OK, these are going to be the winners and these are going to be the losers.’ The (U.S.) west coast is not going to stand still. They are not going to let the east coast eat their lunch.”

» Takeaway No. 5
Florida isn’t certain to gain, but it has to build to stay in the game.

“I don’t think anybody’s throwing out it’s a panacea or a guarantee,” Florida Ports Council President Doug Wheeler says of the port construction boom. “I think the guarantee is: If you don’t do it, they’re not coming.”

» Takeaway No. 6
Florida loses traffic to other ports that it shouldn’t.

Florida will gain employment and revenue just by recapturing cargo that now moves through Savannah and other ports outside the state. Some 90% of what Florida’s 19 million residents and 86 million tourists consume comes by ocean. Of that, 45% comes through ports outside the state. “If we just recapture Florida, you’re talking about billions coming to the state. In Miami, we want to go beyond that,” PortMiami Director Bill Johnson says.

In the long run, growth in Brazil, the Caribbean and Latin America will mean more than Asian trade through the canal. Miami, which handles more traffic from Asia than any other Florida port, still gets 54% of its trade from Latin America and the Caribbean compared to 18% from China. Florida’s location is unique in the U.S. because of its position for east-west and north-south trade. “One of the things people are overlooking is the position of Florida ports in the north-south trade,” says Port Canaveral CEO Stan Payne. As the cost structure in China increases and manufacturing shifts to near-shore Central American countries, the north-south routes only grow more important.

“It’s really going to be a market-driven decision by the carriers. In today’s world, it’s all about time to market. It’s a lot of moving pieces. All the moving pieces are trying to optimize what they do. Everybody’s looking to save money.”

» Takeaway No. 8
Every port can find a niche.

Ports Council President Wheeler reports that a Colombian group is studying an opportunity to ship through Panhandle ports. JaxPort exports cars to Africa and the Middle East. Palm Beach makes a nice living serving the Caribbean. At Canaveral, where cruise business keeps growing, CEO Stan Payne sees potential gain from smaller cargo shipping lines and goods moved from larger canal-transiting ships to smaller ships at a transshipment hub such as Freeport. “We’ve always been a niche player, but the niche is a good one,” Payne says.

» Takeaway No. 9
A rising tide lifts all ports.

Increasing global trade has to go somewhere, and it’s tough to build a new port in the United States. “Somebody leaving for one port, it creates an opportunity for someone else to move in. There are only so many linear feet of deep water available,” says Port Everglades CEO Steve Cernak.