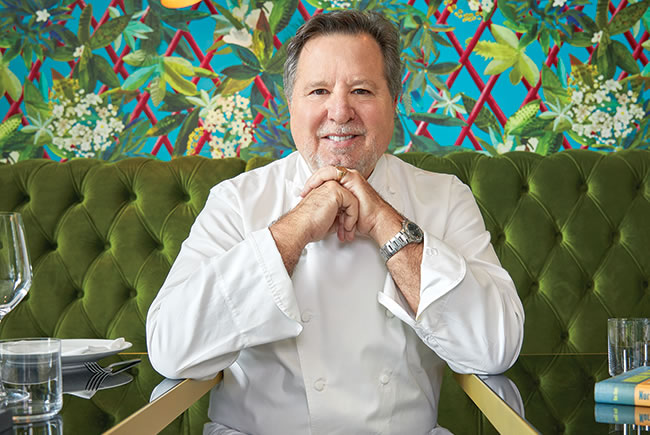 » As a kid, I would sit down and read a lot, by myself, up in a tree, on the bus, anywhere I could soak up the world. If people would have asked me when I was 10 years old, what I wanted to be when I grew up, I would say I wanted to be an artist. I didn’t want to be a fireman or an astronaut. I wanted to do something that was going to lead me to a greater understanding of why we’re here and how we can make the world more beautiful.

» The Siamese twin to passion is discipline. You have to have that. Discipline means you have to be organized in such a way that you’re not some wild-haired, swearing-and-yelling guy or girl back there, throwing things around. You’ve got to be able to have the discipline to be communicative, to be explanatory, to be able to keep your head when everyone else around you is losing theirs.

» My early fascination for food was deep, sometimes even argumentative. My father told a story that I heard years later about a night when he and my mother left my two sisters and myself in the care of a babysitter. The babysitter was in tears when my parents returned home. She was 14 or something, and she told my father that I was outside playing and when I came back in, I said I was hungry, so she fixed me a hot dog. I threw it to the ground and said, ‘This is not a proper dinner!’ What my father said to her was ‘Norman has very unrealistic ideas about food, especially in regards to its presentation.’

» What makes me laugh is what makes everybody laugh, which is the absurdity of something. That’s why the Marx brothers were so genius.

» I was peeling some hard-cooked eggs the other day, and I could see my grandmother in my mind’s eye, standing over the sink, peering over her glasses, perfectly peeling — no nicks, no scars, no broken parts — hard-cooked eggs.

» The mentors, the models for me, have been musicians and writers. I see them responding to the world in ways that are pure. You see depictions of Beethoven losing his hearing and laying his head on the piano to feel the notes. That to me is extremely powerful.

» When I was 21, I was at a party, and it was cold and dark and during that seemingly never-ending part of an Illinois winter. There were these three brothers I grew up with, and two of them were at the party. It was getting late and I asked, ‘Where’s Steve? Where’s your brother?’ They said he’s down in Key West, that he went down there to do something different. I was like, ‘Wow, anybody want to go?’ Ray and Randy said they would. I said ‘when?’ They said, ‘Let’s go now.’ So we got some concentrated form of caffeine and jumped in the van, and 36 hours later, we pulled into Key West. It felt like I was breaking out of a dark place, a kind of confusion about what I was going to do with my life, and suddenly we were in this place of potential wonder — the smell of the flowers, the smell of the ocean. I fell in love, in love with Key West.

» ‘Celebrity chef’ has become a term that has lost its weight, its meaning.

» I’ve managed to be married to the girl I met in the first restaurant that I ever cooked in — 44 years ago — and that’s something that’s really amazing in this business. I’m really proud of that.

» Most of the people who’ve known me for any length of time know that I need to be surrounded by books.

» I was on this sort of peripatetic journey of crappy jobs. I worked in a glass factory, shoveling broken glass onto conveyer belts. I worked in another factory, where I assembled picture frames. I worked in a carnival for three or four months, then got electrocuted on the Ferris wheel and decided to try something else. I got a job as a hot tar roofer and got fired because the boss didn’t like the fact that a rainstorm interrupted our work and I enjoyed that too much. So, I answered an ad in a local circular paper — it said ‘Short Order Cook Wanted — No Experience Necessary’ and they hired me. It was $3.25 an hour. I started the next day and began to learn what it meant to be a short order cook. It’s an athletic skill, a mental game, keeping track of the orders and dealing with the chaos, the cuts and the unknown.

» The orange industry in Florida is worrying me, how it’s being decimated by this disease called greening and by inexpensive imports, primarily from Brazil. The orange is the symbol of Florida, it’s what’s on our license plate, but it could become a distant memory in a very short period of time.

» I always love cooking something I never cooked before.

» My father wanted me to be a professional football player or a car dealer. I was a fairly small kid and got my teeth knocked out when I was playing football my freshman year, and I worked one summer at his car lot and hated it. My mom was very open to whatever I was going to become. She had the patience of Job.

» If you can imagine doing anything else, go ahead and do it, because being a chef is a relentless job — the hours, the physicality of it. If you think it’s stressful, I agree with you, but, for me, it’s what I was born to do.

» One of the great unknown things about the Godfather is that you will know when something really violent is about to happen if you see oranges. Like when Sonny gets assassinated at that toll booth, right before he gets to the toll booth, you’ll see a billboard advertising Florida orange groves. Like there are oranges on the table before the Abe Vigoda character is killed and, when the godfather is almost murdered, he’s at a fruit market picking up a bag of oranges. It’s not a food movie but, in a way, it became a food movie for me.

» I’m not the kind of guy who wants to get in a boat and go out 50 miles into the sea and bounce up and down in 40-foot waves. I’m the guy who wants to build a fire on the sand and watch the sun go down.

» When a young cook asks me how to become a famous chef, I’m like, ‘that’s the wrong question.’ Fame may never come. You have to look at how to become great.

» I love working in Miami. I love the energy of the city, but I’m still really a small-town person.

» Watch the plates come back because the plates don’t lie. If there’s food on the plates, then they’re not enjoying it. I look for empty plates.

» I don’t even know how to this day I had the ability to go buy the book. I certainly wasn’t carrying a checkbook. Maybe, I had just cashed my paycheck. But I went that day to a bookstore on Duval Street and bought one of Mr. Beard’s books —a book called ‘James Beard’s Theory & Practice Of Good Cooking’ — and it literally changed my life. I went from a person who was kind of catching cooking lessons, one after another in a very willy-nilly way, to a person who began reading books to tell me how to do things. It was a technique book, and it really helped systematize things for me. It was like coming over the ridge of a big hill. This was my art. I finally found it.

2017 » In the Kitchen with Norman Van Aken cooking school, Wynwood