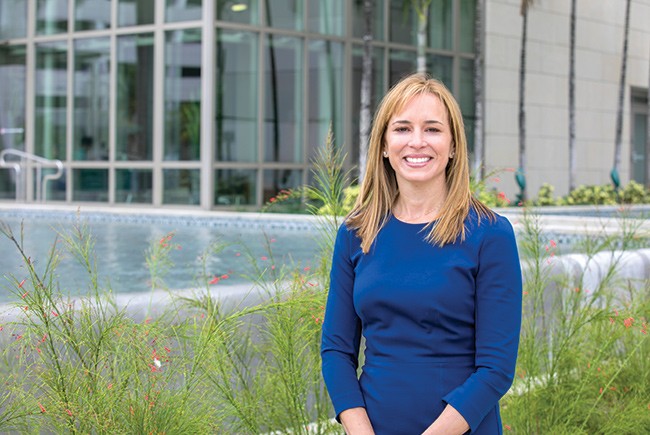 Six weeks after she started a new job as a cancer researcher at the University of Miami Health System, Erin Kobetz noticed a lump in her neck. Although she already had Hashimoto’s disease, an autoimmune disorder that can cause the thyroid gland to swell, Kobetz suspected something else was wrong.

During the next three weeks, she saw a series of doctors, who diagnosed her with thyroid cancer, and underwent surgery to remove her thyroid gland and neck lymph nodes. If not for her familiarity with the medical system, she says, the path from treatment to diagnosis likely would have been much longer.

Ultimately, the experience reaffirmed her commitment to reducing cancer disparities in minority and underserved communities, she says. “It’s not just something I pursue because I find it intellectually engaging. It means something to me personally.” Fifteen years later, she remains cancer-free.

Kobetz, a Miami native, joined the medical research staff at UM’s health system in 2004 after getting a doctorate in public health from the University of North Carolina at Chapel Hill. Interested in whether cervical cancer rates differed across Miami-Dade County, she discovered one area — the enclave known as Little Haiti — where women were four times more likely than women overall to have cervical cancer. Because cervical cancer is easily detectable, treatable and curable, she says, the higher incidence indicated an underutilization of health services.

Women ages 21-65 are urged to have a Pap smear to test for cervical cancer every three years. Haitian- American women, however, were foregoing the test due to a host of cultural, financial and social reasons, Kobetz says. In addition to difficulties accessing affordable health care, they had negative feelings toward Pap screening, including fears of violating modesty norms.

“Not only are women uncomfortable with the notion of exposing themselves to somebody who’s not their intimate partner,” she says, “there’s this idea that the speculum allows germs and other things to enter into the vagina.”

For years, medical researchers had studied whether allowing women to collect their own vaginal samples at home could increase cervical cancer screening in countries with high rates of the disease. Based on positive results from those studies, Kobetz began working with community leaders in Little Haiti to offer self-sampling device kits to local women. (Meanwhile, researchers also had proven the reliability of testing on self-collected samples vs. clinician-collected samples.) Each kit contained a long cotton-tipped swab and a plastic vial for holding the sample cells. To distribute the kits and provide information, Kobetz’s team hired community health workers — women who spoke Creole and were widely trusted. One worker, for example, was a popular local radio personality, Kobetz notes.

It turned out that most women in Little Haiti preferred self-sampling over Pap testing by a clinician, leading to an increase in cervical cancer screening. While that trend has continued, Kobetz says, it’s too early to tell if the incidence of cervical cancer among Little Haiti women has declined significantly. “Incidence rate is something that changes slowly,” she says. “But we are seeing a significant uptake in women who are being screened. We assume that with that uptake, the incidence rate will be lower.”

Since 2004, Kobetz has garnered about $25 million in federal money to support collaborative research in Little Haiti and other underserved areas. Last year, she helped launch a mobile outreach vehicle to bring cancer screenings to Little Haiti, Miami’s Liberty City, south Miami-Dade and LGBTQ neighborhoods. The vehicle also provides HIV/ AIDS screening and education. She says her work shows the need for researchers to actively engage with communities and not just “parachute in” and get out as quickly as possible.

“Initially, there weren’t many people who believed in the idea that you had to work with the community to get to the research questions that were important for achieving health equity,” she says. “That was a barrier that really, really changed with all the federal funding my colleagues and I received. It’s now an institutional priority.”