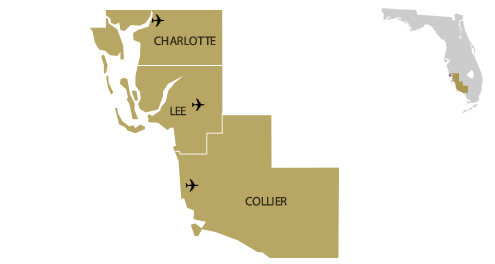 Consisting of just three coastal counties, Southwest is Florida’s smallest economic development region by land size, but it looms large as an ideal business site for three reasons: (1) This region’s largest county by area — Collier — is also Florida’s second richest by per capita income; (2) Lee County, which is home to Fort Myers and Cape Coral, is among the state’s fastest growing counties; and (3) Charlotte County, with its strategic location along I-75 between Tampa and Miami, proves its logistical prowess daily by providing easy access to a potential 4 million customers within a 90-mile radius. And if you’re not sold on this region quite yet, here’s another plus to consider: WalletHub’s 2021 nationwide ranking of “Best Small Cities to Start a Business,” put Fort Myers at No. 8, the only city outside of America’s West to make the Top 10 cut.

Medical device manufacturer Arthrex first came to Florida’s Southwest in 1991, and as its footprint grew in the region, so did a sizeable life sciences cluster. In 2020, as Arthrex opened a new 300,000-sq.-ft. headquarters and 160-room hotel to accommodate visiting physicians for training on its medical devices in Naples, these other health care companies were finding corporate homes here too:

• NeoGenomics, a specialist in cancer genetics testing and information services, has opened a 150,000-sq.-ft. headquarters with space for laboratory and corporate support functions near Southwest Florida International Airport in Fort Myers. In May 2021, NeoGenomics acquired Inivata, a British-based liquid biopsy maker.

• Lenkbar invents, designs and manufactures surgical devices and implants that aim to simplify surgery for physicians and improve patient outcomes. Founded in 2012 with just three employees, Lenkbar has recently expanded into a 20,000-sq.-ft. facility near Naples airport.

• Catalyst OrthoScience, founded in 2014 by an orthopedic surgeon, this Naples-based firm develops innovative medical solutions that make orthopedic surgery less invasive and more efficient for doctors and their patients.

In 2021, two Lee Health facilities made news: Lee Memorial Hospital was named No. 9 “Best Hospital in Florida” by U.S. News & World Report; and Gulf Coast Medical Center opened a new, 52-bed intensive care unit as part of the facility’s $315-million expansion, which is expected to wrap up later this year.

While medical devices are an important component of Southwest Florida’s technology sector, they do not represent the full gamut of technical expertise available throughout the region. Consider also these tech companies that are focused on non-medical solutions:

• Tech research and advisory firm Gartner, a fixture in Fort Myers for more than 20 years, has opened a new campus on Paul J. Doherty Parkway near the airport and plans to add as many as 2,300 workers in sales, client service, research and finance by 2022.

• Cigent, a cybersecurity company established in 2018 in Fort Myers, uses advanced endpoint and managed network security solutions to thwart ransomware attacks and stop data theft even after a security breach.

Companies representing a variety of industry sectors and sizes throughout Southwest Florida enjoy ready accessibility to domestic and international markets in multiple ways. I-75 bisects the region from north to south linking distributors in Charlotte, Lee and Collier counties to major population centers throughout the Southeast and to their five deep-water ports that are within a half-day’s drive. Thanks to this level of proximity to widespread markets, Florida’s Southwest region has established a solid reputation for excellence in logistics and distribution.

One company drawn here because of this region’s seamless connections is food service distributor Cheney Brothers. Founded in 1925 in Riviera Beach on Florida’s east coast, this family-owned and operated firm chose to site its fifth distribution center along I-75 in Punta Gorda in 2015. Since opening at 250,000 square feet, the facility has twice expanded and today, standing at a total of 455,000 square feet, employs close to 450.

And it’s not alone. All across the region businesses looking to streamline their distribution and logistics operations are choosing to settle in Florida’s Southwest. Neighboring Lee County, for example, is home to R&L Truckload Services and ScottLynn USA, which is nearing completion on its new 60,000-sq.-ft. North American corporate headquarters off I-75 in Fort Myers.

There’s renewed activity at Punta Gorda Airport too, where construction is underway on an $18-million expansion, and three aviation companies — Airtrek, Arcadia Aerospace and APG Avionics — have settled in, prompting renewed interest in creating a hub for airplane parts manufacturers and aviation MRO (maintenance, repair and overhaul) businesses if additional space can be found. And another bit of good news: The Florida International Air Show, which was canceled in 2020 for the first time in 38 years due to the pandemic, returns to Punta Gorda in October 2021.

Florida’s Southwest is well-known as a hub for medical device manufacturing, but this region is also home to facilities creating everything from LED retrofit kits to custom UL certified insulated wires for applications in defense, medical and dental devices and cutting machines.

Babcock Ranch, the self-contained, sustainable community that straddles portions of Charlotte and Lee counties, has been solar-powered with help from Florida Power & Light Co. (FPL) almost from its very start.

Now, thanks to that same utility, solar energy is finally coming to residents in another Southwest county. In July 2021, Collier County commissioners approved the construction of their first solar energy plant in Immokalee on a nearly 600-acre plot of land where oranges formerly grew. Scheduled for completion by March 2022, the yet-to-be-named FPL solar plant will be capable of powering 15,000 homes.

Southwest Florida is home to Florida Gulf Coast University, which earned two spots on U.S. News & World Report’s “Best Regional Universities South” rankings: No. 68 among “Regional Universities South” and No. 16 among “Most Innovative Schools.” Since its opening in 1997, Florida Gulf Coast has grown to include 15,000 students working toward 63 undergraduate and 33 graduate degrees. Newly opened on the FGCU campus in fall 2021: Lucas Hall, a 27,000-sq.-ft., three-story building to house entrepreneurial programs, classes and students under one roof. Previously, entrepreneurial students had to take many of their classes at FGCU’s Emergent Technologies Institute, a 20-minute drive away from the main campus. And coming soon at FGCU: The Water School, a comprehensive center for learning and research devoted to water, with specialized curricula leading toward undergraduate and graduate degrees.

Also providing higher educational opportunities in this region are two private universities and a state college: Hodges University with campuses in Naples and Fort Myers; Ave Maria, a Catholic university and town created by Domino’s Pizza founder Tom Monaghan; and Florida SouthWestern State College offering baccalaureate, associate and certificate programs at sites in Punta Gorda, Naples, Fort Myers and LaBelle, as well as a Corporate Training Center in Bonita Springs, where programs can be tailored specifically to the needs of Southwest employers.

No Better Place to Settle In
According to WalletHub, three of the top 25 fastest growing cities in the U.S. are in Lee County: Fort Myers (No. 1); Cape Coral (No. 14); and Lehigh Acres (No. 21). And once people get here, it seems they settle in and stay. According to U.S. News & World Report’s ranking of “Best U.S. Places to Retire,” Fort Myers came in at No. 2 and Naples was No. 4.

So Much to See and Do
It’s downright impossible to be bored in Florida’s Southwest because this place overflows with so many things to see and do. Start with the natural “stuff” — Ten Thousand Islands National Refuge; Big Cypress National Preserve; Everglades National Park; and Corkscrew Swamp Sanctuary, home to the largest remaining stand of old-growth cypress trees in North America. And add to all of this: miles of coastal waters for fishing, swimming, boating and birdwatching. If you’re into beachcombing, do check out Bowman’s Beach on Sanibel Island — one of Conde Nast Traveler’s 2021 “Best Beaches in the U.S.” Just be sure to bring along a bucket for all the seashells you’ll collect.

Green Development
Babcock Ranch, Southwest Florida’s solar-powered community planned for up to 50,000 residents and 19,500 homes, continues to grow. Powered by a 440-acre solar plant producing close to 75 megawatts of electricity, Babcock Ranch has a downtown district, a fitness center, medical offices, meeting rooms, a park with tennis, pickleball and basketball courts and two schools: Babcock Neighborhood School (K-8) and, under construction, Babcock High School (9-12). Of Babcock’s 18,000 available acres, half are set aside as greenways, parks and interconnected lakes. And newly opened in September 2021: a 48,387-sq.-ft. Publix supermarket with a drive-through pharmacy to serve as the anchor for an 82,640-sq.-ft. shopping center.