Peter Warhurst is out to reinvent moving and storage again 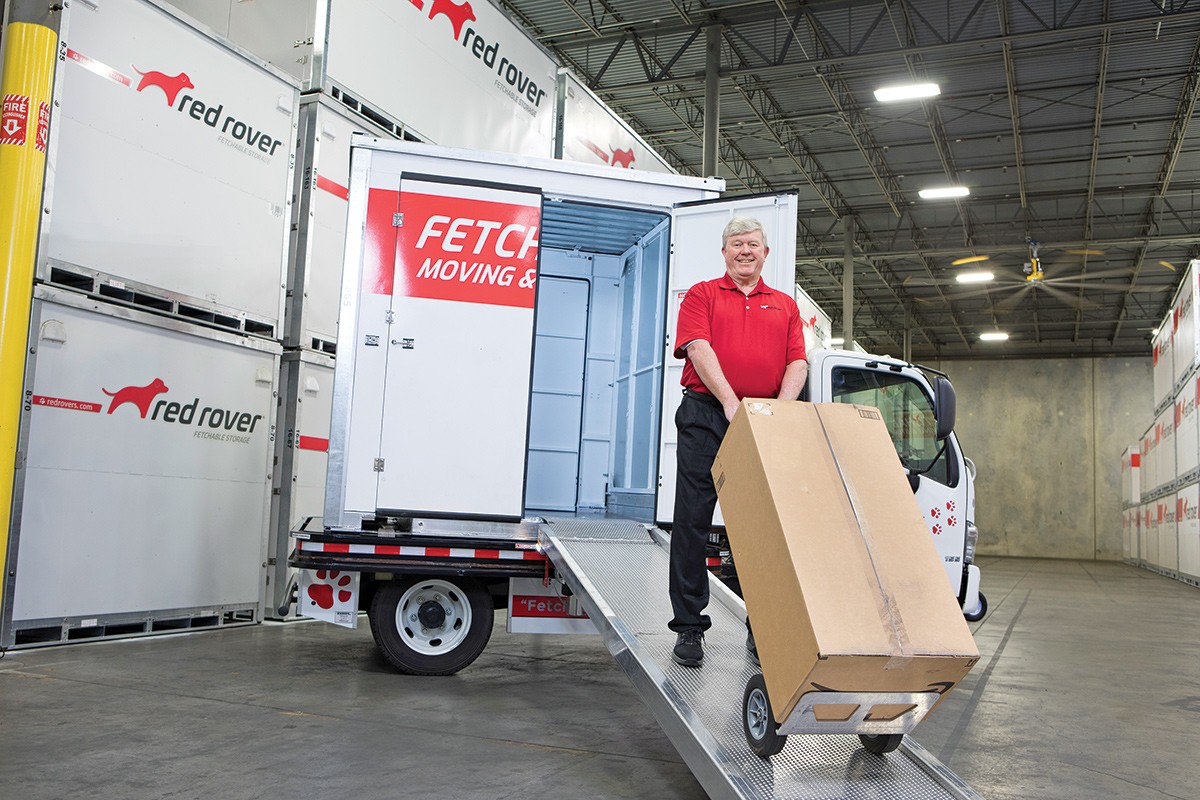 Warhurst founded PODS, the portable storage behemoth that upended the self-storage and moving industry and grew into a multinational powerhouse. He ran it for 10 years and sold it in 2007 for $430 million to a private equity firm.

With his new venture, Red Rover, Warhurst is trying to remake the industry a second time and fix everything he feels he didn’t get right the first. He’s not bashful in touting his new startup. Red Rover, he says, “is such a better product. There are so many advantages to the company and to the consumer.”

Under the model Warhurst pioneered at PODS, the company brings a storage container to the customer. The customer may use it to store belongings for a short period during a renovation, for example, or to pack up household goods in order to move. The container typically sits in the customer’s driveway but can also be kept at a PODS facility. A company employee handles all the delivery, pickup and transport.

Warhurst, while proud of the approach, says there can be problems — less-than-punctual pickups or deliveries, for example. The price point. And mistakes by drivers that can leave smashed mailboxes or worse.

Red Rover, which launched in February 2020, puts more of the process into consumers’ hands, combining elements of PODS and U-Haul. Warhurst calls the new model “fetchable storage.” Customers reserve a truck — eight-, 16- or 24- feet long — pre-loaded with one or more portable storage units. The containers’ loading doors can be configured to the user’s liking (right side, rear, left side) and accessed via a remote-controlled ramp that circumnavigates the truck. Customers pick up the truck and container at a self-service storage lot, fill the container with their belongings, then bring the unit to a Red Rover storage facility, where it remains until the customer returns to move it. Longer moves are handled by a Red Rover employee, but the customer — rather than a Red Rover employee — does the driving for local moves. Use of the truck, gas and tolls are free up to 60 miles with a one-month storage agreement.

“You just fetch the container and bring it back at your pace, your time, your convenience, and on top of that, I gave you a free truck, free miles, free fuel, free tolls,” Warhurst says, in a rehearsed patter he’s been using for weeks to pitch to investors.

(Estimates gathered online for a local move in Pinellas County including storage were around $214 for Red Rover vs. around $470 for PODS.)

The startup is surging as fast as PODS did in its early days when Warhurst’s factories were producing containers as fast as they could. Warhurst has raised nearly $80 million, set up 11 locations in five states and is looking to open in 10 more cities, ranging from Los Angeles to Atlanta. On a map of the United States in his office, Warhurst tracks migration trends, focusing Red Rover’s growth on regions with lots of in- and out-migration. New orders were four times higher in January 2022 than they were January 2021.

Warhurst didn’t set out to be a game-changing entrepreneur. He wanted to be a firefighter. He moved to Largo from Long Island in 1973 because firefighting jobs, scarce at home, were plentiful in Florida. Warhurst became one of Florida’s first paramedics. A few years into the job, 911 emerged as a concept. Pinellas County began exploring ways to connect its public safety departments and wanted input from those on the job.

“The fire chief came up to me and said, ‘What do you know about computers?’ and I said, ‘Not a damn thing,’ ” Warhurst remembers, his New York accent still prominent. But he was willing to learn — a trait his paramedic partner, Dave Revelia, noticed. Revelia, the union president, had recommended Warhurst for the task.

“He loved projects,” says Revelia, who worked with Warhurst on multiple endeavors, including PODS, and came out of retirement to help launch Red Rover. “He just sort of fit the bill.”

Warhurst ended up building a public safety dispatch and records management system and a company called EAI Systems that he took nationwide and grew into the country’s No. 2 provider of 911 records management. He sold to Bell Atlantic for an undisclosed amount in 1992. He was 40.

Warhurst then retired briefly but got bored and decided to dabble in mini-storage. His first warehouse did well. Finding a suitable property for a second proved challenging. “I was literally driving down the street and said, ‘What if we brought the storage to the house?’ ”

Warhurst asks a lot of “what if” questions and insists his employees ask them, too. “If he comes up with an idea, you need to pause and listen,” says Revelia.

Warhurst has filled Red Rover’s management ranks with former associates. Rob Allison rose through the ranks at PODS under Warhurst and was vice president of operations there before joining Red Rover. “I said, ‘Let me think about it and talk to my wife.’ I thought about it for about 15 minutes. I didn’t even call my wife. I called him back and said, ‘I want to be a part of it.’ ” Allison is Red Rover’s chief COO.

Warhurst stresses that Allison is the only employee he lured from PODS. He says he twice invited PODS to purchase the Red Rover concept from him; the company was not interested, he says.

Many of Red Rover’s senior managers took pay cuts and have invested their own money for a chance to rekindle the entrepreneurial magic. “With Pete, we’re always forward thinking; we’re never satisfied with the mouse trap,” Allison says. “We’re always trying to make it better, faster, easier. We’re always trying to improve everything.”

One example: Only three PODS containers fit on a tractor trailer truck, creating a logistical challenge when they have to be transported empty back to a PODS location across the country. Red Rover’s containers fold flat, allowing nine to a truck.

Warhurst’s business plan for Red Rover differs from the PODS model in other ways. To raise capital for PODS, he sold franchises almost immediately. Now, with Red Rover, he’s raising capital and opening company-run locations. Franchising may come later. Labor costs for PODS were higher because it requires so many drivers. Red Rover relies on automation. Red Rover’s reduced payroll translates into lower prices for customers and a clear market niche: Budget-conscious DIY-ers who want something more than a U-Haul and less than a full-service moving company.

“Ultimately, PODS will always be my baby,” Warhurst says. “I’m hoping this baby grows up to be a little bigger, but even if it’s No. 2, I think we’ve done pretty good for the moving and storage industry.”

No longer confined to sprawling clusters of one-story units, newer self-storage facilities are often multi-story, with buildings designed to look more like apartment complexes than garages. Nationally, over the past five years, 97.4 million square feet of storage space was built — equivalent to 6.3% of the total inventory.

Growth in the self-storage industry in Florida has been fueled by the pandemic and an influx of newcomers. “People accelerated their plans for coming to Florida,” says Scott McLaughlin, president of the Florida Self-Storage Association and Executive Vice President of Property Management for Sentry Self Storage Management. The state has seen a net gain of some 700,000 people since the pandemic began, he says. Some markets, including Tampa and South Florida, have seen year-over-year growth rates of 25%. Florida, with roughly 2,600 self-storage properties, has the nation’s third-largest number, behind California and Texas, he says.