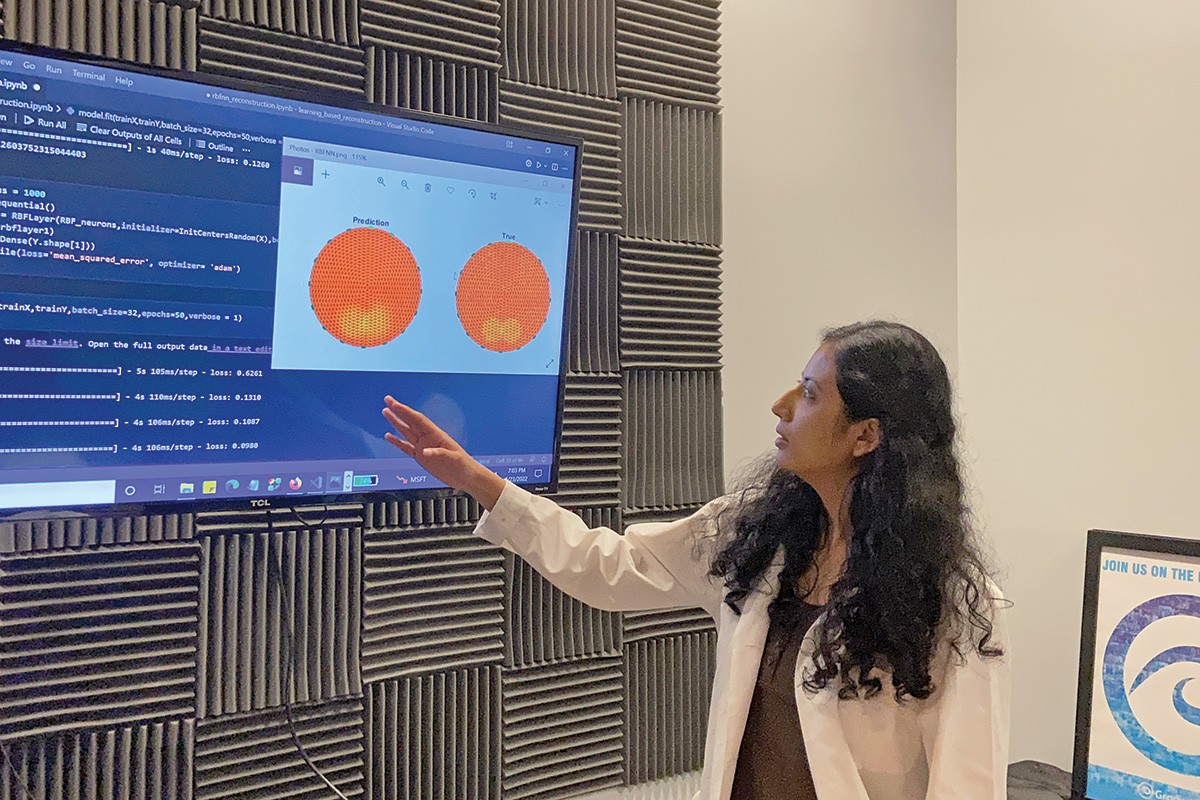 Growing up in her native Kenya, Bindi Nagda, now a doctoral student in applied mathematics at Florida Tech, noticed that people in underdeveloped regions of the country lacked access to sophisticated medical imaging technology or couldn’t afford accurate and reliable health care screenings — and those barriers were costing lives. In Kenya, up to 80% of cancer cases aren’t diagnosed until the late stages, and nearly 79% of patients don’t survive.

The problem inspired Nagda and her team of graduate students to develop EarlyByrd — a low-cost, portable device that can detect breast cancer early.

The technology uses a type of non-invasive medical imaging that can map tissue using electrodes and a weak electrical current. Cancerous breast tissue allows more electrical current to flow through it than healthy tissue does.

“Our device takes measurements from the breast tissue, and our software then analyzes the map to automatically identify and detect malignant tumors,” Nagda says.

Doctors and patients can receive results through a computer or phone app — and unlike a mammogram, the EarlyByrd screening test is radiation-free, posing no risk to the patient.

The technology also appears to have a lower rate of false positives compared to mammograms, Nagda says.

The invention is already winning accolades. Earlier this year, Nagda and her Florida Tech teammates — Nashaita Patrawalla, also a doctoral student in biomedical engineering, and Harold Raghunandan, a master’s student in software engineering — won the top prize of $10,000 in Embry-Riddle Aeronautical University’s Launch Your Venture business competition. The trio is now completing a final build of an early-stage R&D prototype of the device. They’re also working on filing a patent application for their novel image processing and reconstruction methods.

“The next step is to raise more funding in order to run preclinical and clinical trials so that we can achieve FDA approval for a class 2 device,” Nagda says. “This approval would give us the green light to bring this device to market in the USA. Of course, our long-term goal is to go global and deliver our device to underserved regions in countries such as Kenya.”

Many therapies have been developed over the years to treat cancer by targeting oncogenes, genes that have mutated. Eric Guisbert, an associate professor of biomedical and chemical engineering and sciences at Florida Tech, says cancer researchers are “starting to appreciate there are a lot of other genes that are important for cancer that might not have specific mutations, but we can still inhibit them to get a therapeutic benefit.”

Among them is a gene called SF3B1, which Guisbert and his team discovered is a key regulator in “heat shock response,” a stress response in cells that turns on a gene called heat shock factor 1 (HSF1), which promotes cancer growth.

“About 80% of women with invasive breast cancer have high levels of HSF1,” Guisbert says, and those with higher levels of HSF1 often have a poor prognosis. “If you take all women with invasive breast cancer, they’re going to have a five-year, metastases-free survival of about 75%, but if you take women with really high levels of HSF1, it drops to less than 10%.” Other research, Guisbert says, confirms that inhibiting HSF1 will slow the growth of cancer. “If you take cancer cells from a human and use a genetic tool to inhibit HSF1, a lot of those cells would undergo apoptosis. Their growth would slow; their invasiveness slows,” he says.

With funding from the Community Foundation for Brevard, Guisbert and his team are now looking for a chemical compound to create a non-toxic drug that will target SF3B1 to inhibit HSF1. “We’ve made a cell-based assay based on our new discovery, and we’ve already started screening some chemical libraries with the goal of moving it far enough to recruit a pharmaceutical company to carry the ball to the next stages,” Guisbert says. “It’s pretty new. It’s pretty exciting, and the data are pretty compelling for not only (treating) breast cancer but maybe other cancers as well.”

For about 50 years, mammograms have remained the gold standard in breast cancer screening. Now researchers at the University of Central Florida are working on a liquid biopsy technique that could help doctors to better monitor patients for evidence of recurrent breast cancer via a simple blood test.

“Right now, the only thing we have to assess tumor cells in the blood is counting,” says Annette Khaled, head of the cancer research division at University of Central Florida’s College of Medicine — but that method is often imprecise and doesn’t always indicate how aggressive the cancer is. A new technique developed by Khaled’s research lab measures blood levels of a protein complex called chaperonin to provide a clearer picture of metastatic disease. Normal cellular levels of chaperonin are “very low, almost undetectable,” says Khaled, so their presence is a useful “distinguishing marker” of worsening cancer.

The novel test has shown early success. Khaled says her team is working with local hospitals to verify their research through a larger trial — but she believes it could revolutionize the continuing care of breast cancer survivors.

“Imagine a woman who can go a couple of times a year to her doctor and just get some blood drawn. They can monitor her blood for these circulating tumor cells, and if they find them, they can say, ‘Oh, we’ve got to do something; there’s something happening here,’ ” Khaled says. “She may not have any cancer for 20 years. She just does this as part of her routine care and hopefully for most of them, they’ll never have a cancer recurrence, but at least we have a way to monitor it.”