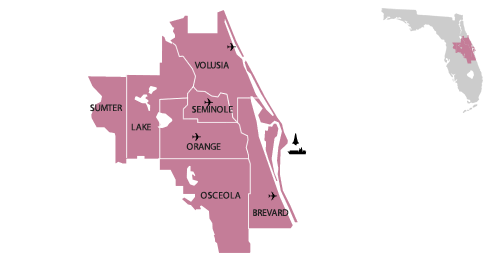 Florida’s East Central region is recognized throughout the world for its real rockets and mega theme parks. But if that’s all you know about this place, it’s time to take a closer look. Thanks to a workforce of 10.6 million, four commercial airports, one seaport, a spaceport and 118 miles of Atlantic coastline, technology, transportation, health care and education thrive here too.

Florida’s Space Coast remains abuzz with anticipation regarding the launch of NASA’s Artemis 1 moon mission. Canceled its first two tries because of rocket malfunctions, then postponed a third time in advance of Hurricane Ian, plans now call for liftoff later this fall, possibly between November 12 and 27, 2022.
Elsewhere along the Cape:

• Space Perspective, a space tourism company with plans to ferry people to the edge of the atmosphere in its space balloons beginning in 2024, is building a headquarters and manufacturing facility at the Space Coast Regional Airport in Titusville with an estimated 240 jobs expected by the end of 2026.

• At the Kennedy Space Center Visitor Complex, “Gateway: The Deep Space Launch Complex,” a 50,000-sq.-ft. attraction showcasing the future of space exploration and including a simulated journey through space, has opened.

Orlando’s theme parks, all of which suffered significant attendance losses due to the pandemic, have come back with a vengeance as new roller coasters continue to make their debuts. On the heels of Universal Orlando’s 2021 opening of its VelociCoaster are: Ice Breaker debuting at SeaWorld Orlando in February 2022 boasting the steepest beyond-vertical drop in Florida, and Guardians of the Galaxy: Cosmic Rewind opening at Epcot in May. One month later, in June 2022, SeaWorld Orlando confirmed the construction of its seventh roller coaster, scheduled to open in 2023. And coming next spring to Disney’s Tomorrowland: TRON Lightcycle Run.

Meanwhile, construction continues on Universal’s fourth Orlando theme park — Epic Universe — which is expected to open by summer 2025. Universal remains tight-lipped about specific details related to the project; however it is believed that Super Nintendo World, which is featured at Universal Studios Japan, will be among the “lands.”

It’s easy to think of Orlando as just a great place to vacation, but guess what? According to WalletHub, this city of 2 million-plus is also the No. 1 best place in the U.S. to start a business. Among many new firms finding homes here are:

• Checkr, a private company that leverages artificial intelligence and machine learning to help companies perform background checks and vet potential employees, will establish a headquarters in Orlando that is expected to create 600 jobs.

• Hoverfly Technologies, a startup that makes tethered power drone systems, is adding 50 positions to its staff of 60. The firm — a graduate of University of Central Florida’s Business Incubation Program — recently moved its headquarters to a 20,000-sq.-ft. building in Sanford.

• Texas lithium-ion battery manufacturer Microvast has purchased a 75,000-sq.-ft. building in Lake Mary to use as a research and development facility. The company is expected to create 100 jobs over five years.

• Astronics Test Systems — which performs testing for a wide range of products, including military aircraft, heart monitors and commuter trains — is moving its headquarters from Irvine, Calif., to Orlando to be closer to many of its customers. The company plans to add 60 employees to its existing staff of 125 over the next two years.

• By land: With fewer cars on the road in 2020 due to the pandemic, the road project labeled “I-4 Ultimate” was able to be completed in record time.

• By sea: More than two years after the pandemic brought cruising to a standstill, the industry is making a comeback, welcoming 2.4 million multiday passengers from October 1, 2021, through May 31, 2022. Likewise, cargo revenue in 2021 increased by 15.7% over the previous year and is projected to climb to a record $17.7 million in 2022.

• By rail: Construction continues on the Miami-to-Orlando leg of the fast passenger rail system Brightline, which currently serves Florida’s east coast from Miami to West Palm Beach. If all goes according to plan, Brightline will begin running trains to Orlando by Christmas 2022.

Among colleges, Orlando-based University of Central Florida ranked among the nation’s “Top 20 Most Innovative Universities” by U.S. News & World Report for the fifth consecutive year.

• Rollins College in Winter Park and Stetson University in DeLand, ranked No. 1 and No. 4 respectively among regional universities south by U.S. News & World Report.

• Eastern Florida State College in Cocoa planning to invest $87 million — its largest investment ever — in academic buildings, student housing and other improvements on its Cocoa campus, including a STEM building with science classrooms and labs and planetarium.

AdventHealth Orlando moved up a notch this year to take the No. 2 position among Florida’s best hospitals with top 40 rankings in six specialties on U.S. News & World Report’s “Best Hospitals 2022-23”: diabetes and endocrinology (No. 29); cancer (No. 30); neurology & neurosurgery (No. 31); gastroenterology & GI surgery (No. 41); orthopedics (No. 45); and obstetrics & gynecology (No. 47). Its pediatric hospital — AdventHealth for Children — ranked No. 39 in neonatology.

Elsewhere in the region, Orlando Health’s Orlando Regional Medical Center was ranked No. 8 overall among Florida’s best hospitals by U.S. News & World Report, and its children’s hospital — Orlando Health Arnold Palmer Hospital for Children — excelled in five specialties: pediatric diabetes and endocrinology (No. 28); neonatology (No. 34); pediatric orthopedics (No. 35); pediatric neurology and neurosurgery (No. 41) and pediatric urology (No. 49). Also receiving honors: Nemours Children’s Hospital, which ranked No. 40 in pediatric orthopedics and No. 50 in pediatric diabetes and endocrinology.

And in other health news:

AdventHealth Orlando is one of seven sites worldwide chosen by the Davos Alzheimer’s Collaborative to pilot a study that aims to make early detection of Alzheimer’s disease more accessible. Though there is no cure, early detection of signs and risk factors for Alzheimer’s gives patients time to participate in clinical drug trials and find medications that work for them.

Off the Beaten Path
East Central is rightly famous for its theme parks, but if you just can’t handle one more ride on one coaster, take a walk on the wild side. Wander up the Space Coast to Merritt Island National Wildlife Refuge for a close-up look at gulls, terns, egrets, herons, ibises and storks flying free and undisturbed by all that rocket “stuff” at the Cape. There’s no charge to explore here, and if you’re lucky, you might spot a bald eagle.

Where Browsing is a Contact Sport
Welcome to the town of Mount Dora. This tiny little dot on the map in Central Florida has the power to attract thousands of visitors who come for the knick-knack market, fresh-baked cookies and interesting shops. You won’t find a Picasso or a Van Gogh here, but you might take home the perfect plate for Grandma. Aficionados may scoff at places like this, but doesn’t everyone deserve a healthy dose of cuteness now and then?