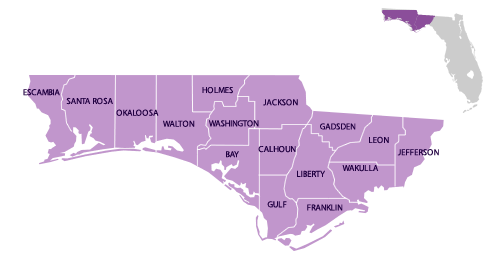 There’s a lot to like about Florida’s Northwest. Known for its white sandy beaches, sparkling blue waters and moderate year-round temperatures, this region offers business owners the best of all worlds — an opportunity to live in paradise and to staff their businesses with skilled aviation, technology and logistics workers who are ready to retire from the military, but not necessarily the workforce.

Florida’s Northwest is home to eight military installations, including NAS Pensacola, NAS Whiting Field, Hurlburt Field, Eglin AFB and Tyndall AFB, which together account for some 56,000 military and civilian jobs. Added to these are many thousand more jobs generated by the privately owned aerospace manufacturers, aircraft maintenance firms and defense contractors that cluster here.

Making news in this sector:

• ST Engineering, constructing its second of four jet aircraft maintenance and repair facilities at Pensacola International Airport with completion of the 177,000-sq.-ft. hangar anticipated by late 2022. When all hangars are completed, ST Engineering will have 700,000+ square feet under one roof and expects to employ at least 1,725 aviation workers by 2028.

• Partnering with Northwest Florida State College’s Aviation Center of Excellence, Hsu Innovation Institute has opened a 27,000-sq.-ft. aviation training center at Bob Sikes Airport in Crestview. The facility’s campus, which includes a large hangar and access to an 8,000-ft. runway, will offer instruction for students seeking to compete for high-tech aviation and aerospace jobs with the goal of training to become FAA-certified airframe and powerplant mechanics as well as pilots.
• Construction continues on Leonardo Helicopters’ multimillion-dollar aviation maintenance facility at Whiting Aviation Park next to Naval Air Station Whiting Field. Plans call for Leonardo to move its headquarters and support center to the park over the next few years.

• California-based defense contractor American Metal Bearing, a manufacturer of propulsion bearings for the U.S. Navy and NATO allies, plans to build a new headquarters on 11 acres in the Walton County Industrial Park near Freeport.

• UAV Corp. is expanding its Skyborne Technology operations in Gulf County with the goal of making space travel cheaper and more accessible to the public. Plans call for development of a SkySpace airship that could transport passengers to space for about $50,000.

• Construction of a 251,000-sq.-ft. FedEx distribution center in Panama City to service the region from Pensacola to Tallahassee. Opening in fall 2022, the new facility replaces an existing 60,000-sq.-ft. structure; 280 jobs are expected.

• The launching of a $26-million improvement program by Port Panama City, which includes a storage dome to increase capacity for wood pellets manufactured in nearby Jackson County; expansion of its east terminal; and construction of an intermodal distribution center.

Airports Rebound and Expand
Northwest Florida’s airline industry took a hard hit during the pandemic, but it is roaring back. In 2021, the region’s four commercial airports reported these best-ever passenger numbers:

• Tallahassee-based Danfoss Turbocor has broken ground on a new, 167,000-sq.-ft. facility in Tallahassee. Scheduled for completion in early 2023, the site is expected to triple the firm’s current manufacturing capacity.

• Clearwater-based Purple Square Management is building a 24,500-sq.-ft. commercial bakery and distribution facility at the Okaloosa Industrial Air Park. The company, which operates Popeyes, Baskin-Robbins, Dunkin’ and other chains in 10 states, plans to create 60 jobs as a result.

• Central Moloney has chosen Bay County for a $20-million expansion of its manufacturing operations. Headquartered in Pine Bluff, Ark., the company designs and manufactures electrical distribution transformers and transformer component parts for utilities and distribution throughout the U.S.

• Gulf Cables, a manufacturer of the aluminum and copper insulated cables used in utility projects, has opened a 160,000-sq.-ft. manufacturing facility next to its existing plant at the Santa Rosa County Industrial Park near Milton.

Taking shape across the region:

• Following the successful 2020 launch of its national cybersecurity workforce development program — CyberSkills2Work — the University of West Florida has received a $3-million grant extension from the National Security Agency to expand the program with the goal of preparing and placing 1,650 trained cybersecurity professionals within the next two years.

• North Florida Innovation Labs broke ground in June 2022 on its new research incubator. Located in the Innovation Park corridor — home to several high-tech companies as well as the FAMU-FSU College of Engineering and the National High Magnetic Field Laboratory — the 40,000-sq.-ft. building will have 31 labs and 20 offices as well as coworking spaces and conference rooms. FSU made a $5.6 million commitment to the incubator earlier this year.

Florida’s capital city, Tallahassee, owns and operates the 4th-largest municipal electric service in Florida and the 22nd largest in the U.S., serving 122,000+ residential and commercial customers. It’s been recognized by the American Public Power Association as having the best public utility in the nation, and Tallahassee has no intention of resting on its laurels. This city already has two solar facilities integrated into its system and plans to convert all city offices, service facilities, light-duty vehicles and fixed route buses to renewable energy over the next decade. It won’t be easy or quick, but this city is determined. Long-range plans call for providing customers with 100% clean, renewable energy by 2050.

New and improved facilities include:

• Baptist Health Care’s $615-million, 50-acre campus in Pensacola on track to open in early 2023. The 264-bed hospital is the single largest and most expensive health facility in Northwest Florida.

• PanCare of Florida continuing to grow its health care services for underserved patients. In June 2022, the nonprofit organization broke ground on a full-service pharmacy in Panama City. Next up: a laboratory and women’s health center.

For the fifth consecutive year, personal finance website WalletHub.com has named Tallahassee among the top 20 most educated cities in America based on quality of education and educational attainment. Nearly half (48%) of Tallahassee residents over 25 have a bachelor’s degree or higher.

Northwest Florida is home to three of Florida’s 12 public universities, all of which have earned at least one accolade in U.S. News & World Report’s 2022 college/university rankings. Florida State University and Florida A&M were recognized in the National Universities category at No. 55 and No. 202 respectively, while University of West Florida took the No. 35 position among Regional Universities South. Also worthy of celebrating, two grants for Florida A&M University: $30 million from the National Oceanic and Atmospheric Administration to support environmental science studies and $1.5 million from HCA Healthcare to fund scholarships aimed at attracting more undergraduates to careers in health care.

Where Life’s a Beach
It’s no wonder tourists flock to Florida’s Northwest, then put down roots. This narrow strip of land along the Gulf of Mexico is home to some of the prettiest beaches and bluest water on earth. Don’t miss these barrier island beauties: Henderson Beach, Grayton Beach and St. George Island State Park.

Love Water, but Hate Sand and Salt?
We have inland freshwater lakes too. One of them — an almost perfect circle — is newly reopened for the first time in six decades. Public swimming is allowed at Lake DeFuniak between March 1 and September 30.

So Much to See and Do
Pine forests, dozens of small towns with quirky names, Florida’s capital, the Blue Angels at work, five flags to admire in Pensacola and the dolphins at Gulfarium Marine Adventure Park.