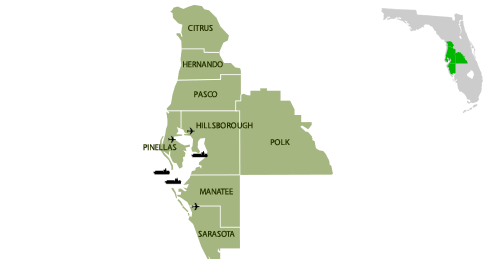 Florida’s Tampa Bay region is easy to like. Just spend a few minutes on WalletHub and you’ll see why. Not only is Tampa ranked No. 8 nationwide among “Best Large Cities to Start a Business” (up from No. 10 a year ago), it’s the No. 2 “Most Pet Friendly City,” the No. 11 “Most Fun City in the U.S.” and the No. 14 “Best Place for First Time Home Buyers.” If you’re already a Tampa resident and looking forward to retirement in the not too distant future, don’t bother to relocate. Tampa is No. 9 among WalletHub’s “Best Places to Retire.”

The Tampa Bay region is home to 20 corporate headquarters and perhaps none shines brighter than Publix Super Markets. The Lakeland-based grocery chain ranked No. 42 on Fortune’s 2022 list of the world’s most admired companies — six slots higher than last year’s ranking and the only Florida company to snag top 50 honors.

Among recent and pending arrivals in this busy sector are:

• HSP Group, a global expansion services provider establishing a corporate headquarters in Tampa to assist companies with the expansion and management of their international operations.

If asked to name Tampa Bay’s top industries, would you think to include manufacturing near the top? If not, you should. At 67,830, Tampa Bay is second only to Miami-Fort Lauderdale for manufacturing employment. And this sector is growing.

• Tampa Tank-Florida Structural Steel has announced plans to expand its Tampa headquarters located in Gibsonton with a $3-million investment in new equipment and the addition of 60 new jobs for welders, fitters, machinists and equipment operators by the end of 2022.

• Austrian-based RHI Magnesita, an international supplier of refractory products — materials that can withstand extreme heat in manufacturing — has announced plans to open a regional headquarters in Tampa.

To call technology a “booming industry sector” in Tampa Bay would be a gross understatement. This region boasts the second largest IT employment in Florida and it’s growing. In fact, so many new tech companies have found homes in this region, one has to wonder … can we make room for more? Absolutely!

• TheIncLab, a data visualization and artificial intelligence firm that relocated from Washington, D.C., to Tampa in 2020, has expanded its headquarters, adding 40 jobs in 2022 and moving from a 400-sq.-ft. space to 8,000 square feet in Ybor City.

• Shufflrr, a firm that develops marketing presentation software, has relocated from New York to Tampa with plans to create 30 jobs in sales, business development and account management over the next three years.

• IT firm Avanade, a provider of cloud and technology services to a variety of companies including Microsoft, has opened its first U.S. Engineering Hub in Tampa with plans to hire 500 software engineers over the next three years.

Tampa Bay excels at logistics and transportation because it has easy links and all the right assets:

By air: Tampa International, largest of the region’s three commercial airports, handled 18.1 million passengers in 2021, up 77% from the previous year, but not quite reaching pre-pandemic numbers. Not to worry, however.
TIA anticipates significant passenger gains over the next two decades and is preparing to handle them as construction resumes on its Airside D project. In the meantime, Sarasota-Bradenton International Airport logged a 155.7% increase in passengers in 2021 and St. Pete-Clearwater International Airport scored its busiest month ever — 278,618 passengers — in July 2022.

By sea: Port Tampa Bay, Florida’s largest port by physical size and cargo tonnage, remains among the nation’s most diversified, handling all major cargo categories including liquid and dry bulk, containers, commodities and automobiles. In FY2021, 33.4 million tons of cargo passed through the port, including 181,738 TEUs of containerized cargo, a 22% increase over the previous year; there was no cruise activity.

On the southern edge of Tampa Bay, 10.4 million tons of cargo moved through the newly renamed SeaPort Manatee, including 135,666 TEUs as well as 109 million gallons of citrus juice, 1.2 billion bananas, 39 million pineapples and 38 million avocados as the port extended its partnership with Del Monte Fresh Produce through at least 2026

Here, too, students enjoy ready access to Morsani’s primary teaching hospital, Tampa General, which for the seventh year in a row has been named Tampa Bay’s “Best Hospital” by U.S. News & World Report with top 50 rankings in seven medical specialties: ear, nose and throat (No. 16); diabetes and endocrinology (No. 27); orthopedics (No. 33); gastroenterology & GI surgery (No. 34); obstetrics and gynecology (No. 40); rehabilitation (No. 40); and pulmonology and lung surgery (No. 49). Tampa General is also the nation’s sixth busiest transplant center, logging a total of 558 individual adult and pediatric transplants in 2021, including its 1,500th adult heart transplant to date.

Also earning top 50 rankings from U.S. News & World Report in 2022-23 is Moffitt Cancer Center at No. 25 nationwide for cancer care and Sarasota Memorial Hospital with a pair of No. 35s for rehabilitation and urology.

In addition to providing direct patient care, Tampa Bay’s Life Sciences sector has a thriving technology component. Thanks to familiar names like Johnson & Johnson, Amgen and Bristol Myers Squibb, this region has become a natural magnet for newly emerging biotech companies looking to make their marks. Recent arrivals include:

• NuMedTechs, establishing a U.S. research hub in Tampa to grow its diagnostic abilities and treatment processes associated with diagnosing respiratory conditions; and

• BeniComp, a health tech company in the insurance space looking to create 100 new jobs through 2025.

Educational opportunities thrive at all levels throughout Tampa Bay.

University of South Florida is named among the nation’s top 50 public universities by U.S. News & World Report for the fourth year in a row, but this year, the news is even sweeter. For the first time in school history, with its score of 42, USF joins the elite group of top 100 universities nationwide.

• Florida Southern College in Lakeland: No. 8 — Best Regional Universities South; No. 11 — Best Value School; and No. 16 — Most Innovative (tie).

Hip, Hip, Hurray! The Greatest Show on Earth Is Coming Back to Town
If you thought live circus was a thing of the past, rejoice! Ringling Bros. and Barnum & Bailey will be back in the fall of 2023 with loads of thrills, high-flying acts and jaw-dropping moments … just no animals. A global search for the best acts in the world is already underway, with rehearsals scheduled to begin in June 2023, followed by the official U.S. launch to more than 50 cities in North America starting in September. Tickets go on sale in April 2023.

Here Comes the Sun!
At last … a direct route to sun and fun. Opening October 21 in Pinellas County — SunRunner — a 16-stop transit line that will shuttle passengers between downtown St. Petersburg and St. Pete Beach. The trip takes 35 minutes each way — about 30% faster than the current bus service. Riding will be free for the first six months of operation, then it’s $2.25 one way.

Saying Goodbye to an Icon
Winter, the bottlenose dolphin with a prosthetic tail who starred in a movie and turned Clearwater Marine Aquarium into a global tourist attraction, died in November 2021 from an intestinal problem. Discovered entangled in a crab trap off the coast of Cape Canaveral in December 2005, Winter was transported to Clearwater where she was fitted with a prosthetic tail and became the star of her own movie, “Dolphin Tale.” Winter was believed to be about 16 years old.